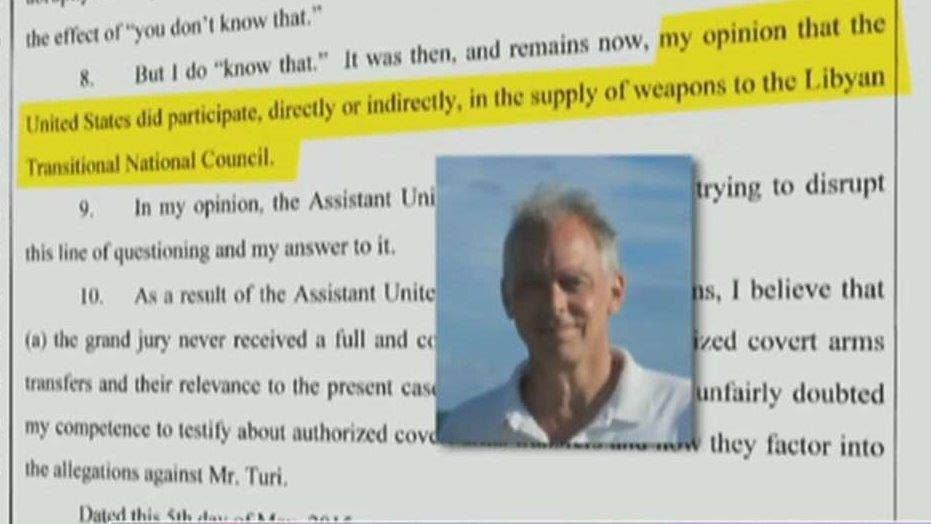 An arms dealer who had threatened to reveal potentially damaging information about Hillary Clinton's alleged role in arming Islamist militants until federal prosecutors abruptly dropped their case against him Tuesday, told Fox News the case has cost him everything.

Federal prosecutors faced a Wednesday deadline to turn over discovery documents to the legal team of American Marc Turi, who had been charged with selling weapons to Libyan rebels. Late Tuesday, an announcement came that the government was dropping the case, which was set to go to trial on Nov. 8 – the day American voters choose between Clinton and GOP nominee Donald Trump. The move may avert a release of potentially explosive documents.

“I am glad this horrific five-year ordeal is over and I am pleased to be able to move on with my life," Turi told Fox News in a statement. "The American public has the right to know that an injustice was committed against an innocent American."

Turi said his legal team advised him to accept the deal and avoid a trial, but insisted that his actions were in furtherance of his ongoing support of U.S. foreign policy. He said defending himself in a case that has now been dropped has cost him everything.

"The government took away my life, my savings, and my company that I worked so hard to build to serve our nation, and for what?" he said. "I still don’t really know who the unjust actors were who launched this attack against me from the shadows. I just hope that someday there will be someone that will be held accountable."

Last year, in his only extended television interview, Turi provided Fox News with documents and email exchanges he had with high-level members of Congress as well as military, and State Department employees to back up his claim that the Obama administration authorized in 2011, at the height of the Arab Spring, a covert weapons program that spun out of control.

"That's where I came up with this 'zero footprint' Arab supply chain, whereby, our foreign ally supplies another, Arab country," Turi said. In this case, the US would supply conventional weapons to a U.S. ally-Qatar, who would inturn supply them to Libya, as a kind of workaround.

"If you want to  limit the exposure to the US government, what you simply do is outsource it to your allies,"  Turi said, describing the practice. "The partners-the Qataris, and the Emiratis did exactly what they were contracted to do."

Turi told Fox he never supplied any weapons to Qatar, and it was in the hands of the U.S. government and the State Department's Bureau of Political and Military Affairs which was headed by a key Clinton aide, Andrew Shapiro. Shapiro was responsible to oversee the export control process at the State Department.

“They don’t want this stuff to come out because it will look really bad for Obama and Clinton just before the election,” an associate of Turi told Politico, claiming that information sought by Turi’s team would show Clinton’s own role in arming Libyan rebels fighting former strongman Col. Muammar Qaddafi while she was secretary of state.

Many of the arms destined for Libyan rebels ultimately fell into the hands of Islamist militants, reportedly including those in Syria.

In their motion for dismissal, federal prosecutors acknowledged that discovery rulings from U.S. District Court for the District of Arizona Judge David Campbell factored into the decision. The motion includes a request that Campbell accept a confidential agreement to settle the case civilly, further fueling claims the deal was struck to keep potentially damaging disclosures under wraps.

Turi adviser Robert Stryk accused prosecutors of bringing the case against Turi in order to cover up Clinton’s mishandling of Libya. Clinton was secretary of state on Sept. 11, 2012, when jihadists mounted an attack on two American facilities in Benghazi, killing four Americans including Ambassador Christopher Stevens.

The attack came just weeks before President Obama stood for re-election against Mitt Romney, and the administration initially – and falsely - claimed it was a spontaneous event triggered by an obscure anti-islam video. It later became evident that it was a coordinated terror attack by extremists linked to al Qaeda and Ansar al-Sharia.

Neither the Justice Department nor the White House responded to requests for comment on the case or the settlement.

Turi was indicted in 2014 on charges of arms dealing in violation of the Arms Export Control Act and lying to the State Department in official applications. Prosecutors said he falsely claimed the weapons were destined for Qatar and the United Arab Emirates. His lawyers said the arms shipments were part of a government-authorized effort to arm Libyan rebels.

The claims by Turi’s legal team were supported by documents related to the case and obtained by Fox News last year.

"It was then, and remains now, my opinion that the United States did participate, directly or indirectly, in the supply of weapons to the Libyan Transitional National Council," career CIA officer David Manners said in a sworn declaration dated May 5, 2015.

The timing was critical, because in the spring of 2011, the Libyan opposition was not formally recognized, and the direct supply of arms was not authorized. At that time, the CIA director was David Petraeus.

Manners testified before a grand jury investigating Turi prior to his indictment. Manners was an 18-year CIA officer who had previously been posted in Prague and Amman. At the time of his declaration, he said he was “the executive assistant to the deputy director of the National Security Agency."

Manners’ declaration supported statements made exclusively to Fox News by Turi about what President Obama's team and members of Congress knew about weapons flowing into the region during the chaotic Arab Spring of 2011.

Turi was one of several thousand U.S. arms contractors licensed by the State Department to sell and move weapons around the world.

"I got involved in this business in the 1990s," Turi said. "I've been involved in all type of operations, regarding transportation, logistics, and liaising with those foreign governments."

"That's actually been a huge, policy position, of the Obama administration," Celina Realuyo, a professor of national security at the Perry Center at the National Defense University, told Fox News in 2012.

Realuyo has served two presidents with expertise in tracking down money and weaponry used in what are called "dark networks" that can channel weapons to criminal and designated foreign terrorist organizations.

In the spring of 2011, Turi says his high-level contacts both inside and outside of the U.S. government, encouraged him to explore options to arm the Libyan opposition as they tried to overthrow Qaddafi.  He says his associates included Manners, and that the government worked through private contractors to limit its own exposure.

"FYI. The idea of using private security experts to arm the opposition should be considered," Clinton wrote, using her private email address. Significantly, the emails released by the State Department blacked out this line, but the version given to the Benghazi Select Committee was complete.

Turi got approval to sell arms to Qatar – which was apparently cover for sending weapons to Libya - in May, 2011. But in July 2011, his Arizona home was raided by federal agents.

"They came in the full body armor, and weapons and, they take my computers and my cellphones and that was it. That was the last time I saw them. And they've been chasing me all over the world for the past three years, speaking to associates of mine all over the United States and looking into my records and my past."

Turi believes he was being blamed for a program that went off the rails, much as Nakoula Basseley Nakoula, whose Internet film, “The Innocence of Muslims,” was initially blamed for the Benghazi attack.

"At some point, I may be that Internet video excuse,"  Turi told Fox News. "I don't know. But, it's really strange that the U.S. government would invest three years, a multi-year investigation, fly all over the world interviewing people, for an application."

In her only congressional testimony to date on Benghazi in January 2013, Clinton was asked by Sen. Rand Paul, R-Ky., about the flow of weapons.

"I will see what information is available," then Secretary Clinton ‎responded. "I don't have any information on that."