U.S. Rep. Kyrsten Sinema, D-Ariz., goes over the rules in a television studio prior to a televised debate with U.S. Rep. Martha McSally, R-Ariz. (Associated Press)

An Arizona union that represents state public safety employees withdrew its endorsement of U.S. Rep. Kyrsten Sinema this week after its members said the executive board voted on the endorsement without their input.

Sinema, a Democrat, is locked in a tight U.S. Senate race against U.S. Rep. Martha McSally, a Republican, for the seat being vacated by Republican Sen. Jeff Flake.

After members objected to the board's actions, the Arizona State Troopers Association polled its members in an email Monday, asking whether they wanted to endorse Sinema or stay neutral, the Arizona Republic reported.

The poll indicated “the membership has indicated a preference to stay neutral."

"All members are encouraged to vote for the candidate they personally support," the email said. "AZTroopers will refrain from any political statements concerning the race until the conclusion of the election."

Dave McDowell, an association member and retired lieutenant, told the paper that members hadn’t been consulted prior to the Sinema endorsement.

“That displeased a number of members, including myself,” McDowell said.

McDowell said he supports McSally, but doesn’t think the union should be endorsing candidates at all.

"The Troopers have spoken," a McSally campaign spokeswoman said in a text message to the Republic.

Sinema, whose brother is a Tucson police officer, received the union's endorsement in her past three campaigns.

In an email to the paper, the Sinema campaign said it respects the association’s decision.

"We respect the association's decision to remain neutral given the divisive tone of the race and appreciate their support for Kyrsten's past three elections, as well as continued support from members and law enforcement officers across the state," a spokeswoman said.

The campaign touted the association’s endorsement in an ad spotlighting law enforcement and border issues. The ad is no longer running, the campaign said, because it had run its course and a change was ordered Friday.

President Trump recently endorsed McSally during a campaign rally earlier this month, calling her a “great veteran” and a “great fighter,” while describing Sinema as a far-left extremist.

The race has gotten ugly in recent weeks, with McSally asking Sinema to apologize for comments she made during a 2003 radio interview about American intervention in Iraq and Afghanistan at the end of a contentious Oct. 15 debate.

The radio host made a comment about joining the Taliban, to which Sinema responded, "I don't care if you want to do that, go ahead." McSally, a former fighter pilot, accused Sinema of supporting treason and asked her to apologize.

Sinema responded by accusing her opponent of playing dirty. 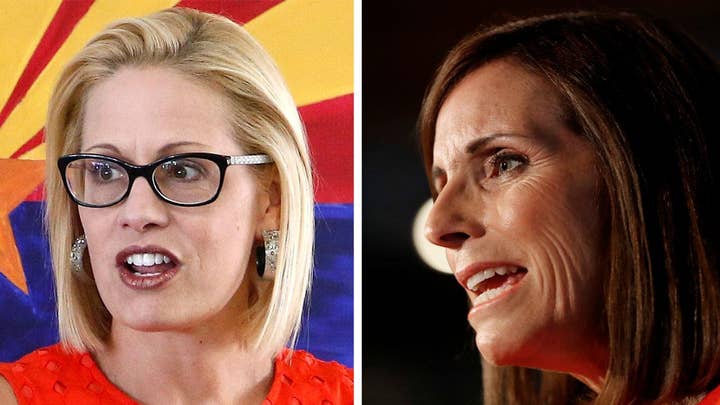 Recent polls show the two candidates in a dead heat, according to the Washington Times.