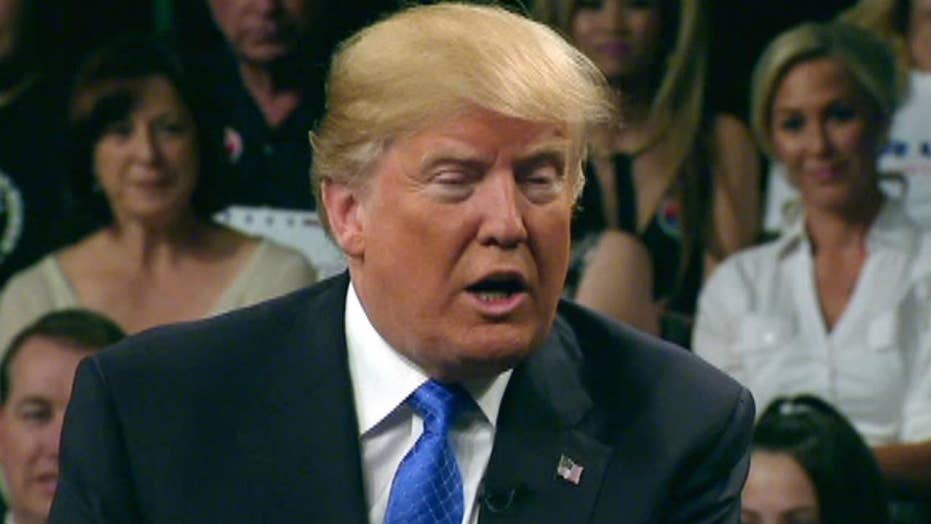 Candidate responds to criticisms from the left, the GOP establishment and rally disrupters on 'Hannity'

Donald Trump and Hillary Clinton will look to build their already-robust delegate leads in Western contests Tuesday night across three states -- with the marquee battle expected to be between GOP rivals Trump and Ted Cruz in delegate-rich Arizona.

The Arizona GOP primary looks custom-made for a Trump victory. The state has long dealt with illegal immigration problems, and the Republican front-runner's central campaign promise is to build a wall across Arizona and the entire southern U.S. border.

Yet even if Trump wins, Cruz appears poised to do well in Utah, which also votes Tuesday. Those two states -- plus Idaho -- are holding Democratic contests as well, as Bernie Sanders struggles against the odds to close his widening delegate deficit with Clinton.

The contests are being held in the shadow of the latest deadly terror attack, in Brussels, and it's unclear whether that might affect voters' choices.

For Cruz, splitting the two GOP contests may be the best outcome, though Trump stands to build his delegate lead all the same if he can hold Arizona.

The GOP primary there offers 58 delegates to the winner; only eight remaining state Republican races have more. And Arizona's contest is the largest remaining winner-take-all race on the Republican map.

Regardless of Tuesday night’s outcomes, Trump still would have to grind through the latter part of the primary season to reach 1,237 delegates and secure the nomination.

The Cruz campaign has remained remarkably resilient, now in the final three from the original GOP field of 17. He has so far won a total seven primaries and caucuses, compared with 19 for Trump. However, he faces long odds toward winning the nomination.

“I don't see any way for Cruz to pull out a win in Arizona. A state like Arizona has been Trump's to lose all along,” Joe Desilets, a Republican strategist and managing partner at the firm 21st&Main, said Tuesday, citing Trump’s key endorsements and his hardline stance on immigration.

Cruz is expected to do better in the Republican Caucus in Utah, a contest in which Mormons are a large voting bloc and where fellow Mormon and outspoken Trump critic Mitt Romney, the 2012 GOP presidential nominee, remains influential.

Trump lost to Cruz in Mormon-heavy Idaho earlier this month.

“Cruz winning an outright majority in Utah would be a huge blow to Trump going forward,” Desilets also said. “Cruz is going to continue to play well in the Mountain West … to keep Trump from outright winning the nomination on the first ballot” at the GOP’s convention in July.

Forty delegates are at stake in Utah for the Republicans.

In the aftermath of the Brussels terror-bombings Tuesday morning, for which the Islamic State has taken responsibility, Trump and Cruz flexed their well-exercised, national security muscle.

Trump called for end to the U.S. Visa Waiver Program and told Fox News, “I’ve been talking about this for a long time.”

Trump called for a temporary ban on Muslims into the U.S. after the Paris attacks in November and the San Bernardino attack the following month.

Cruz went more directly at President Obama and his immigration policies, including his plan to allow tens of thousands of Syrian refugees into the United States.

“The time for the president’s political correctness has passed,” Cruz said. “We absolutely have to revisit our immigration policy across the board to prevent Islamic terrorists from coming in.”

However, it’s unclear what impact the bombing that killed at least 30 people and the candidates’ responses might have on undecided voters.

Utah also is holding a Democratic caucus for front-runner Hillary Clinton and rival Vermont Sen. Bernie Sanders in which 33 delegates are at stake.

In Arizona, the Democrats are competing for 75 delegates.

The others races Tuesday are the American Samoa Republican Caucus and the Idaho Democratic Caucus.

Sanders will need to do well in Arizona, after getting swept in five March 15 contests and trailing in the delegate race 1,630 to 870, with 2,383 needed to win the party nomination.

Sander has invested a lot of time in Arizona including a campaign stop this weekend to the U.S.-Mexico border.

And he was the only 2016 presidential candidate to skip speaking Monday at the American Israel Public Affairs Committee conference in Washington to stay on the campaign trail.

But the big losses last week have dimmed hopes in Arizona.

"I think he needed a lot of momentum heading into the last week of voting here,” D.J. Quinlan, a Democratic strategist and former executive director of the state Democratic Party, told Politico. “Hillary's sweep definitely took away any momentum they had."