Republican Senate candidate Martha McSally sits down for an exclusive interview with Harris Faulkner as Arizona voters prepare to head to the polls to pick a replacement for Sen. Jeff Flake.

Reps. Martha McSally and Kyrsten Sinema of Arizona, who are set to face off in November to succeed retiring Republican U.S. Sen. Jeff Flake, weighed in on the illegal-immigration debate in interviews that aired Sunday on Fox News.

Sinema has served in the House of Representatives since 2013, representing Maricopa County, while McSally has served in Congress since 2015, representing the Tucson area. Sinema is up three percentage points over McSally — 47-44 percent, according to a Fox News poll of likely voters released last week. Her lead is within the poll’s margin of error.

The topic of immigration is among the top issues for voters in the state, as both candidates addressed in the “Town Hall America” special.

“This is extremely frustrating that the Democrats have been obstructing border security — this should be a unifying issue,” McSally, a former Air Force colonel who has played up her allegiance to President Trump, told Fox News’ Harris Faulkner. “I have been leading in the House to make sure we fight for the resources and policies to secure our border.”

She said as a congresswoman, her “bill guaranteed $38 billion of border security to include building the wall, plus 5,000 new agents and 5,000 agents at port of entry.” 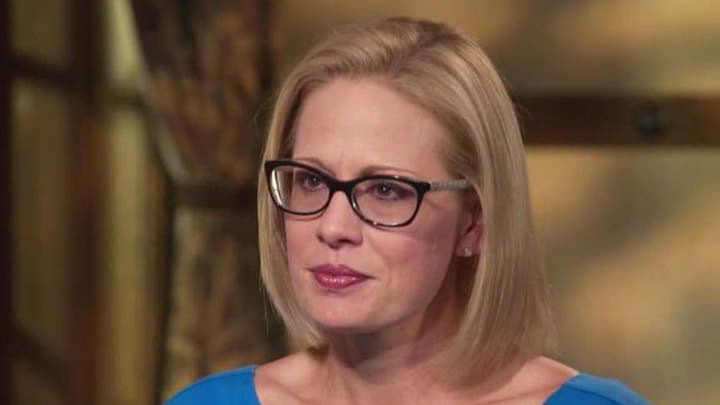 Sinema said the wall is an 18th century solution to a 21st century problem.

Her solution: “We should have money for drones, night-vision cameras, towers, and more boots on the ground so we can interdict the bad guys smuggling in guns and people and engaging in really dangerous trafficking. We’ve got to put all this together.”

McSally said the “administration shouldn’t have to choose between enforcing the law and keeping families together.”

The administration tried separating parents and children to deter immigrants from making the dangerous trek through Mexico, however a political outcry forced it to end the separations. It also tried holding in families in detention until their court dates, but the courts rejected the policy. Fox News recently reported that according to Customs and Border Protection sources, some immigrants see an opportunity to exploit gridlock in Washington and get in while the administration tries to figure out its next step.

As the Trump administration regroups from these political and legal setbacks to curb illegal immigration, McSally said her work in the Senate would solve the public-safety issue, which she calls one of the highest priorities across the country: “Families can stay together and we can enforce the law.”

Sinema said that “separating families is wrong, and doesn’t comport with American values.”

The centrist Democrat said she is more than willing to work across the aisle.

When asked why she voted with Trump 60 percent of the time, Sinema said she’s not party-first. “I stand for what’s right for my state and community. When the president is moving forward on an issue right for our state, happy to vote with him.”