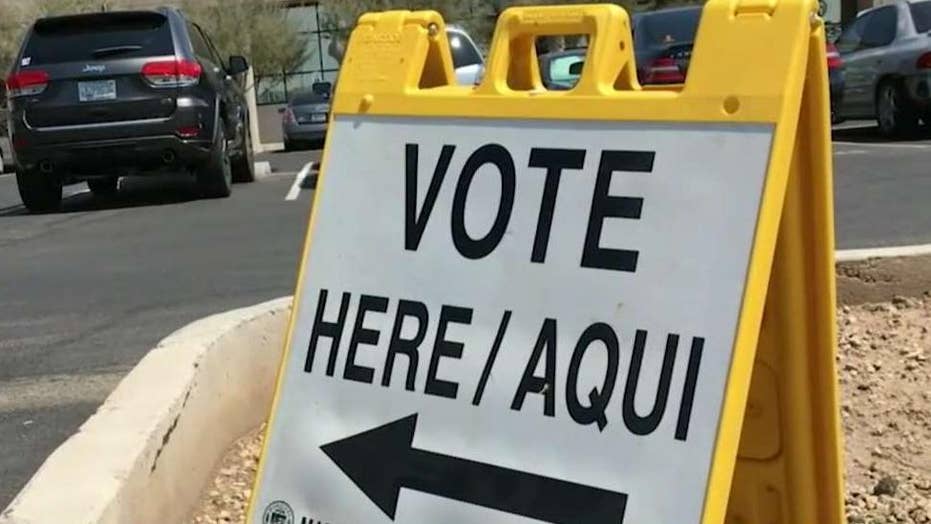 Martha McSally, Kelli Ward and Joe Arpaio battle for the nomination in a changing electorate; Alicia Acuna reports on the race.

Officials in Arizona said Tuesday that problems with voting machines in several polling places temporarily prevented people from being able to cast ballots in the state's primary elections.

A spokesman for Maricopa County Recorder Adrian Fontes told Fox News on Tuesday afternoon that "all polling locations dealing with technical issues this morning have been fixed."

A source familiar with the process said that because of the problems, Maricopa County may ask a court for an extension for polls to stay open past 7 p.m local time.

Earlier, Fontes said that his office, in the state's most populous county, learned of the issues Monday afternoon. Four polling places, he said, were down at 10 a.m.

"This is not a hiccup, this is a serious concern where lots of voters in Maricopa County are not able to get voting," Fontes said.

The contractor hired to set up voting machines in the Phoenix area apparently failed to send enough technicians, leaving several polling places out of operation. Fontes says he sent his staff to as many locations as possible to make fixes.

Fontes says the contractor didn't set up the machines on time. More than 100 calls from voters have reported problems Tuesday.

According to ABC 15 in Arizona, some voters say they were turned away from the polls because of tehnical and computer issues.

One frustrated voter, Ben Saylor, told the Associated Press he arrived at his polling place in north Phoenix and was told the equipment would not be set up until lunchtime. He was directed to a vote-anywhere polling station and also was told he would have to cast a provisional ballot.

"If you're a registered citizen, and you have the right to vote, there should be no such thing as a provisional ballot," Saylor said.

Among the elections taking place Tuesday is the Republican primary to replace outgoing Sen. Jeff Flake.

In the race, two-term Rep. Martha McSally has emerged as the frontrunner as she fends off challenges from the right from former state Sen. Kelli Ward and Sheriff Joe Arpaio.

In the state’s governor’s race, President Trump has endorsed the re-election effort of Gov. Doug Ducey of Arizona, who is facing a challenge Tuesday from former Secretary of State Ken Bennett.

“Governor Doug Ducey of Arizona is doing a great job," Trump said. "It would be really nice to show your support tomorrow by voting for him in Tuesdays Primary. Doug is strong on Crime, the Border, and our Second Amendment. Loves our Military & our Vets. He has my full and complete Endorsement.”

Meanwhile, Ducey is expected to appoint someone soon to fill the seat of the late-Sen. John McCain, who died Saturday.