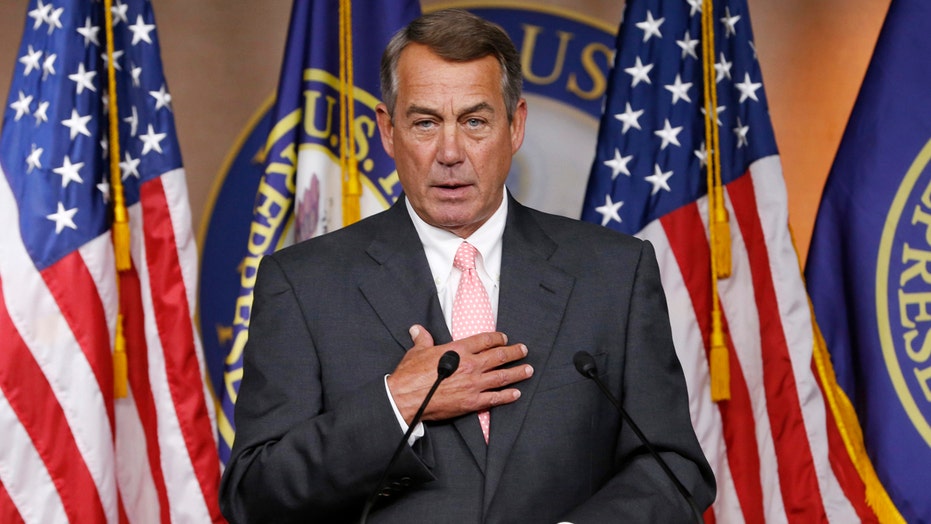 Luke Messer, R-Ind., on who will emerge as a leader and likelihood of government shutdown

This may have been the inevitable outcome for House Speaker John Boehner.

It was the Tea Party movement, prepared to incinerate government and torch Washington that propelled Republicans into the House majority in 2011. Republicans gained a staggering 63 seats in the 2010 midterm election, the most seats picked up by any party in a midterm since 1938.

Boehner, Ohio Republican, rode the swell of this wave into the speaker’s office. The tsunami propelled his lieutenant, then-House Minority Whip Eric Cantor, R-Va.,  to the majority leader’s suite.

The new Republican majority was going to strafe ObamaCare, sever spending and rebuke President Obama at every turn.

The GOP accomplished some of that, but never quite enough to satisfy that core on the right that projected them into power. In the end, that was the same group that ultimately sliced Cantor and eventually whacked Boehner, who on Friday gave up his post and House seat.

Boehner harbored big visions of cutting a so-called “grand bargain” on the budget with Obama to prevent a looming financial catastrophe. The speaker hoped to pass landmark reform immigration legislation. Boehner wanted to filet The Affordable Care Act. The list goes on.

But chaperoning such a rambunctious  -- at times unreasonable -- conference of Republicans reduced Boehner to sometimes just doing the minimum. The basics. Barely voting to keep the government open -- mostly with Democrats. Narrowly voting to raise the debt ceiling to sidestep a global financial shock -- with lots of Democrats. Sending everyone else home for Christmas in 2011 so he, the sole Republican in the chamber, could unilaterally pass a bill to lift a payroll tax. Many House Republicans argued against it, though voters were whipsawing his party in the polls on the issue.

Boehner could only dance with those who “brung him” for so long. Certainly the House could pass “messaging” bills that played to the right all day. But when it came to governing, dealing with the Senate and speaking with Obama, Boehner had to abandon those who thrust him into the speaker’s chair.

That’s why this finally caught up to him.

Dissatisfaction brewed for months against Boehner. It churned in January during the vote for speaker. Twenty-five Republicans voted for someone besides him. Boehner won-- but narrowly avoided the tally from going to a second ballot for the first time since 1923.

And then there was Rep. Mark Meadows, R-N.C.

In late July, Meadows authored a resolution to declare the speakership vacant. Such a measure could prompt a vote that, if successful, could trigger an election for speaker in the middle of the Congress. No one had tried the maneuver since 1910.

It’s doubtful that effort by Meadows or any other lawmakers would have prevailed. But this approach only stoked the anti-Boehner embers.

Everyone anticipated a rocky autumn at the Capitol. The House was first set to vote on the Iran deal -- deploying a legislative strategy Boehner crafted in late July. But that wasn’t good enough for the firebrands. Just moments before the plan hit the House floor, Boehner pulled back. Rank-and-file members had the votes to blow it up.

And then came an effort to keep the government open without defunding Planned Parenthood. It was clear Boehner would take that approach next week -- passing a bill with some Republicans and scores of Democrats.

Meadows’s gambit may never have come to a vote. But it was undoubtedly the prime mover that culminated in the speaker’s exit.

In Shakespeare’s “Julius Caesar,” the Roman leader’s political rivals plot to murder him in the Senate chamber. But the conspirators don’t want anyone to hang the assassination on any one of them. So when Caesar arrives, the cullers hide knives in their robes and jointly stab the emperor en masse. That way the death isn’t linked singularly to any of them.

Boehner’s intrigue didn’t play out quite that dramatically on the congressional stage. But it was clear that the many cuts of many lawmakers ultimately laid low the Ohio Republican.

“It was not an inside force that pushed the speaker out. It’s not just a member here and there. The American people spoke,” proclaimed Rep. Thomas Massie, a Kentucky Republican and an avowed Boehner opponent.

“The honor of John Boehner this morning stands in stark contrast to the idiocy of those members who seek to continually divide us,” Florida GOP Rep. David Jolly, fumed at what he called “the shutdown caucus.”

The Capitol returned to normal Thursday afternoon after the extraordinary visit to Congress by Pope Francis. But the joy of the occasion quickly melted as everyone knew about the looming contretemps.

The Senate had failed to bring to the floor a bill to keep the government open but defund Planned Parenthood. And so the stage was set. The Senate would try to advance a stopgap bill (known as a Continuing Resolution or “CR”) Monday to run the government and fund Planned Parenthood after Sept. 30. Republican leaders in the House would have to accept that bill -- probably passing it with some GOPers but a lode of Democrats.

The head of the Republican Study Committee, Texas Rep. Bill Flores, arrived later. Then two of the most pro-life members of the House showed up: GOP Reps. Chris Smith, New Jersey, and Trent Franks, Arizona.

A senior Republican aide told reporters the House GOP leadership planned to discuss additional methods to get at Planned Parenthood during a meeting Friday. Still, the approach to fight the group later wasn’t enough for Flores.

“Voting on the Senate’s Continuing Resolution without amending it is not enough,” he said. “The Senate’s CR reads like (Senate Minority Leader) Harry Reid’s (D-NV) wish list. And the House must amend it to achieve our policy objectives.”

Business as usual when Capitol Hill meetings started breaking up at about 5 p.m. on Thursday.

When Boehner announced his departure, he proclaimed that a “prolonged leadership turmoil would do irreparable damage to the institution.”

His pending resignation liberates Boehner to advance the controversial bill to fund the government next week, which fails to defund Planned Parenthood. The speaker contends he would have moved that bill regardless of whether he was headed for the exit, now inoculated against further political damage.

A reporter asked  Boehner if the next speaker would face the same political discord.

House Majority Leader Kevin McCarthy, R-Calif., was visibly shaken when he emerged from the conclave where Boehner announced his resignation. Boehner said he had to tell the McCarthy the news “about five times” before the California Republican believed him.

McCarthy is now the odds-on favorite to succeed Boehner as speaker. Florida GOP Rep. Dan Webster, a former speaker in the state House and majority leader in the state Senate is also running.

Webster commanded 12 of the 25 Republican ballots who voted for someone other than Boehner in January.

McCarthy worked the phones religiously Friday to shore up support. But in the immediate moments after Boehner’s announcement, a source close to McCarthy gave two fascinating answers when asked about the lawmaker’s political future.

“Is he interested? Yes,” replied the source when asked about McCarthy’s aspirations to succeed Boehner.

And then came political frankness.

“Does he want it?” posited the source, snarkily.

In other words, McCarthy may have no other choice but to go for it now. Some astute political observers wonder whether circumstances will be any different for McCarthy than they were for Boehner.

Moreover, a matriculation by McCarthy creates an opening for majority leader. That in turn could trigger a race for majority whip. This all comes while Congress tries to avoid a government shutdown, raise the debt ceiling and fund major transportation programs in the coming weeks.

“This is going to be a barnburner of a leadership election," said a knowledgeable source.

So much for Boehner trying to curb the turmoil.

It appears a coalition of some Republicans and lots of Democrats will sign on to the stopgap spending bill to prevent a government shutdown. But could that roll call vote serve as a litmus test for McCarthy and other GOPers angling for a promotion?

Couldn’t the same group that wanted to torpedo Boehner deploy the government funding vote against those leaders, too? Why would they be absolved and treated any differently than Boehner by House conservatives?

The full House votes for Speaker. Once Boehner departs, there will be 434 members: 246 Republicans and 188 Democrats. House GOPers are expected to nominate McCarthy. The Democrats will undoubtedly run House Minority Leader Nancy Pelosi, D-Calif.

But members can vote for anyone and nominate additional candidates on the floor.

The successful speaker must secure an outright majority of the entire House. Not simply the most votes. The next speaker needs to garner 218 votes (an absolute majority of 434). That means McCarthy or whomever cannot lose more than 28 Republicans or it forces a second ballot. Again, there were 25 GOP defectors in Boehner’s last speaker vote. The House cannot conduct any other business until it selects a new speaker.

It’s generally believed McCarthy has way more votes than any other House Republican. But can they avoid kicking this to a second ballot? Especially amid all the current turbulence?

“The way for conservatives to make an impact is to coalesce and stick together,” Mulvaney said. “We know we are outnumbered. I look forward to working with the next speaker to continue moving our conference a little further to the right.”

But that is the way of politics. Shakespeare spelled it out best in Act IV, Scene 3 of “Julius Caesar.”

“There is a tide in the affairs of men.
Which, taken at the flood, leads on to fortune;
Omitted, all the voyage of their life
Is bound in shallows and in miseries.
On such a full sea are we now afloat,
And we must take the current when it serves,
Or lose our ventures.”