Joe Biden may be leading in 2020 Democratic primary polls, but he’s struggling to get a footing in the digital space, with a parody anti-Biden website featuring him touching women and girls being the top search result on Google.

Many social media users pointed out in recent days that Biden’s official 2020 campaign website is hard to find in a Google search – instead parody website JoeBiden.info is topping the results, giving an impression that it’s the main site.

BIDEN MISTAKENLY CLAIMS MARGARET THATCHER, WHO DIED IN 2013, IS WORRIED ABOUT TRUMP

The website, which looks like a campaign site, features images and GIFs of Biden touching women and girls, a behavior for which he recently apologized after multiple women came forward detailing the uncomfortable encounters with him.

"Uncle Joe is back and ready to take a hands-on approach to America’s problems!" the site reads. "Joe Biden has a good feel for the American people and knows exactly what they really want deep down. He’s happy to open up and reveal himself to voters and will give a pounding to anybody who gets in his way!"

The website goes on to detail common criticisms of Biden’s track record as a U.S. senator, including his support for the 1994 crime bill that paved way to mass incarceration or his vote to support the invasion of Iraq in 2003.

It also features more recent controversies, including the alleged shady dealings in Ukraine, where Hunter Biden, his son, was employed at a Ukrainian energy company as a board member while the Obama administration was mulling a course of action amid Russia's invasion in Eastern Ukraine.

Biden also publicly admitted that he threatened the Ukrainian president to fire a top prosecutor, who happened at the time to have been investigating corruption of the company his son was a board member.

The prosecutor, who was fired after the threat, was reportedly facing criticisms back then by both Ukrainians and international officials for not bringing enough corruption prosecutions. Biden’s push to oust the prosecutor may have not been influenced by the probe of the company his son was involved in.

It remains unclear who created the JoeBiden.info website. Fox News’ review of registry history shows that the website has been frequently changing hands and up until 2013 it looked like a legitimate website for Biden. 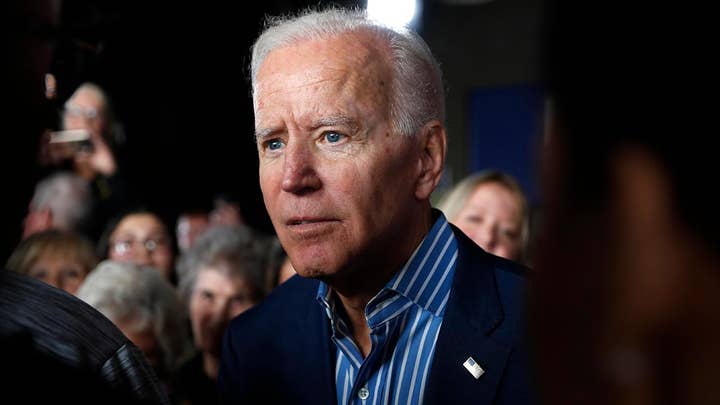 Since at least 2015, however, the website turned into a parody site, supposedly detailing the gaffes of Biden. Fox News’ contacted the individual who appears to have transformed the address into a mock site.

The person did tell CNBC that he’s “closest to a libertarian” and that the website has tricked multiple people into thinking that it was a legitimate Biden’s 2020 campaign page.

“I would assume Biden’s campaign knows about it though by now,” the person wrote. “I get thousands of Biden supporters coming to the site every day who fail to realize that it is a parody — asking for volunteer information, donation information, suggestions on how to handle the [Anita Hill] situation, or criticizing his use of ‘All men are created equal’ — no joke. ”

The site has a disclaimer noting that it’s not funded “by any candidate, committee, organization, or PAC.”