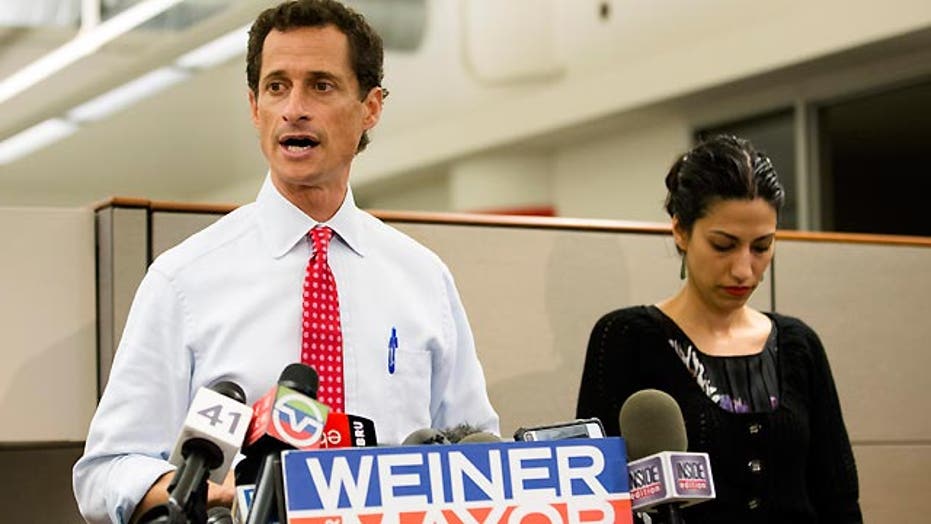 Anthony Weiner shrugged off calls Wednesday to withdraw from the New York City mayoral race over a new sexting scandal, despite criticism from old colleagues, media calls for him to step down and newly released poll figures that gave him a moral character rating of 17 percent.

Weiner told reporters Wednesday night that while the uproar of recent days had "been rough," he felt "these are things I brought upon myself." He added he was "pressing forward."

The ex-congressman was greeted with boos as he took the stage at a public housing meeting earlier Wednesday evening, the Associated Press reported.. But by the end of his remarks, the crowd loudly cheered.

Even former Democratic congressional colleagues said enough is enough. Rep. Jerrold Nadler said Wednesday: "I think he should pull out of the race. I think he needs serious psychiatric help."

Rep. Joseph Crowley said New Yorkers are "tired of the drama" surrounding Weiner. And Rep. Charles Rangel said he believes the voters will put an end to Weiner's ambitions.

It also put him in first place, with 26 percent of the vote, in the first round of the Democratic primary but in the event of a runoff, the poll says he would finish behind former city comptroller William Thompson.

The New York Post Wednesday reported Weiner had released an "open letter" in which he said sending the lewd texts and photos were "a terrible mistake that I unfortunately returned to during a rough time" in his marriage to wife Huma Abedin.

Weiner Tuesday admitted sending a woman sexually explicit photos and messages and acknowledged the activity took place as recently as last summer, more than a year after he resigned from the House in June 2011 for the same sort of behavior with at least a half-dozen women.

With Abedin standing an arm's length away from him, Weiner told a hastily called news conference he would stay in the race despite the new onslaught of negative publicity.

"I want to bring my vision to the people of the city of New York. I hope they are willing to still continue to give me a second chance," Weiner said.

In an editorial posted online Tuesday, the New York Times urged Weiner to drop out of the race, saying Weiner "should take his marital troubles and personal compulsions out of the public eye, away from cameras, off the Web and out of the race for mayor of New York City."

Three of his rivals for mayor — Public Advocate Bill de Blasio and former City Councilman Sal Albanese, both Democrats, and billionaire John Catsimatidis, a Republican — also called on Weiner to quit the race.

"Enough is enough," de Blasio said. "The sideshows of this election have gotten in the way of the debate we should be having about the future of this city."

Another mayoral hopeful, city Comptroller John Liu, stopped short of calling for Weiner to bow out, but suggested his "propensity for pornographic selfies is a valid issue for voters."

The other leading Democratic candidates, including City Council Speaker Christine Quinn and Thompson, did not immediately comment.

The congressman fessed up to the naughty texts after sexually explicit photos and online chats between "Carlos Danger," allegedly the pseudonym for the city hall hopeful, and an unidentified woman surfaced on the blog, TheDirty.com.

The reports claim that that the conversation between the pol and an unidentified 23-year-old woman took place on the social media website Formspring in August 2012, a year after he resigned from his post in Congress after being caught the first time — and nearly seven months after his first child with wife Abedin was born.

The woman claims on the blog that she first started talking online with Weiner in July 2012 and it became intense by August 2012, when he offered to find a Chicago condo where they could meet up.

She also alleges that they had phone sex and that they exchanged nude photos of each other. She claims she received photos from Weiner of his penis sent from a Yahoo email account under the “Carlos Danger” name. The purported image was subsequently posted on TheDirty.com.

Buzzfeed.com later reported that a source close to the matter said Weiner exchanged the explicit messages and photos with a woman named Sydney Elaine Leathers in late July of last year. The website characterized Leathers as a "progressive activist" from Indiana.

Weiner released a written statement on Tuesday afternoon, which he read again at the press conference, admitting to additional raunchy conversations.

"I said that other texts and photos were likely to come out, and today they have,” he said in the statement, referring to comments he made two months ago during the start of his mayoral campaign.

“As I have said in the past, these things that I did were wrong and hurtful to my wife and caused us to go through challenges in our marriage that extended past my resignation from Congress. While some things that have been posted today are true and some are not, there is no question that what I did was wrong. This behavior is behind me.”

Weiner did not elaborate on which of the new reports are true or false and whether or not it took place last summer.

It's unclear how the lewd news will impact Weiner's campaign. Some New Yorkers have shown a willingness to forgive his past indiscretions since he announced his mayoral campaign via YouTube in May.

He has since shot to the lead in the polls, with a Quinnipiac University survey last week showing he held 25 percent of the vote.

Officials from Anthony Weiner’s mayoral campaign did not respond to requests for additional comment from FoxNews.com.

FoxNews.com's Perry Chiaramonte and The Associated Press contributed to this report.