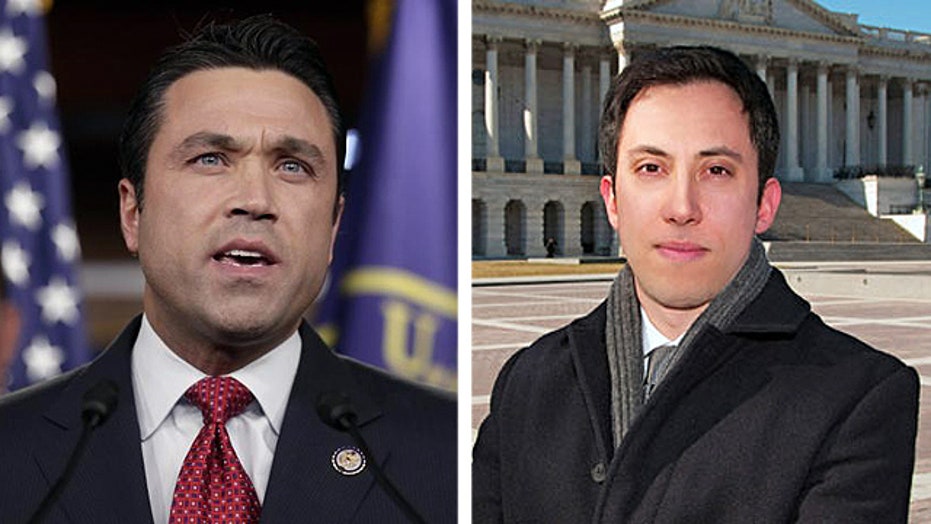 The art of an apology

Things are bad when you’re being given public relations advice by Anthony Weiner.

Rep. Michael Grimm landed himself in hot water after the State of the Union when he threatened NY1 reporter Michael Scotto -- on camera -- for asking about campaign finance allegations. He threatened to throw Scotto over the balcony.

Not the smartest thing to do while under investigation.

This morning, in sashays Weiner, the political scandal master, who offers advice in a penned opinion piece in the New York Daily News. Just file this under, “In my humble opinion,” he says.

Since when has Anthony Weiner ever had a humble opinion?

This is the former Brooklyn rep who resigned after sending out pictures of his body parts on Twitter, right? Then he denied it, admitted it, and promised to stop. And then kept doing it. Oh, and tried to run for New York City mayor at the same time. Right?

What words of wisdom could he possibly have?

“A congressman should not threaten to break, throw, ask to step outside or otherwise get physical with a reporter.”

Seriously? I mean, my six-year-old could have told me that. Here’s another nugget:

“Try answering the questions posed to you, calmly.”

But this is my favorite. When asked a question that could be seen as hostile, Weiner opines, “…explain some of the messy doings that have swirled around you.” And, he adds, “Better yet, if you don’t want to talk about your fund-raising scandal, maybe just maybe don’t have one to begin with.”

If this is not the pot calling the kettle black, I don’t know what is.

At the end of the opinion piece in Weiner’s bio line, there’s this little bon mot: Weiner “acknowledged informing the FBI in 2010 of an allegation conveyed to him about Grimm’s fund-raising practices.”

So, Weiner has already told on Grimm to the FBI.

What? This isn’t just a down-and-out pol offering helpful advice?

This kind of kooky Kabuki theatre is just what takes focus away from real issues and problems our country faces. As Brit Hume tweeted after the State of the Union, Grimm’s little scuffle catapulted him (and his investigation) to national name recognition status.

Grimm’s antics lit up social media. Instead of firing up my Twitter to find prescient analyses of our leader’s oratory skills, I was bombarded with tweets about Grimm, who dug in deeper after his threats with this statement:

“I was extremely annoyed because I was doing NY1 a favor by rushing to do their interview first in lieu of several other requests. The reporter knew that I was in a hurry and was only there to comment on the State of the Union, but insisted on taking a disrespectful and cheap shot at the end of the interview, because I did not have time to speak off-topic. I verbally took the reporter to task and told him off, because I expect a certain level of professionalism and respect, especially when I go out of my way to do that reporter a favor. I doubt that I am the first member of Congress to tell off a reporter, and I am sure I won’t be the last.”

It’s a strategy definitely not in the Anthony Weiner-approved playbook. The Washington Post’s Chris Cilizza calls him out.

Grimm must have slept on it. Or, his mom called and told him he’d better shape up, because yesterday morning he issued a finely crafted written statement.

"I was wrong. I shouldn't have allowed my emotions to get the better of me and lose my cool.”

Graciously, Scotto forgave him – and announced the apology on Twitter.

Meanwhile, Grimm is staying off of social media. This is his last tweet.

Yet despite all of the Grimm outrage, and thousands of words written about the incredulity of the incident, one pundit relished the skirmish.

It was supposed to be a funny behind-the-scenes picture. Jay Carney posted it to Instagram as part of the White House’s recent #InsideSOTU campaign.

It shows four cups of coffee, three with the seal of the President, and this: My day can often be measured out in coffee cups. The WH Mess makes a mean "Carney Coffee": 4 shots of espresso (2 regular, 2 decaf). #CarneyCoffee #InsideSOTU –Jay

It was “liked” more than 7,600 times. And then he worried that Americans would think he’s drinking their tax dollars away.

When dealing with the press, it might be better drink it with a shot of whiskey. Wait, what’s that bottle on the mantle?