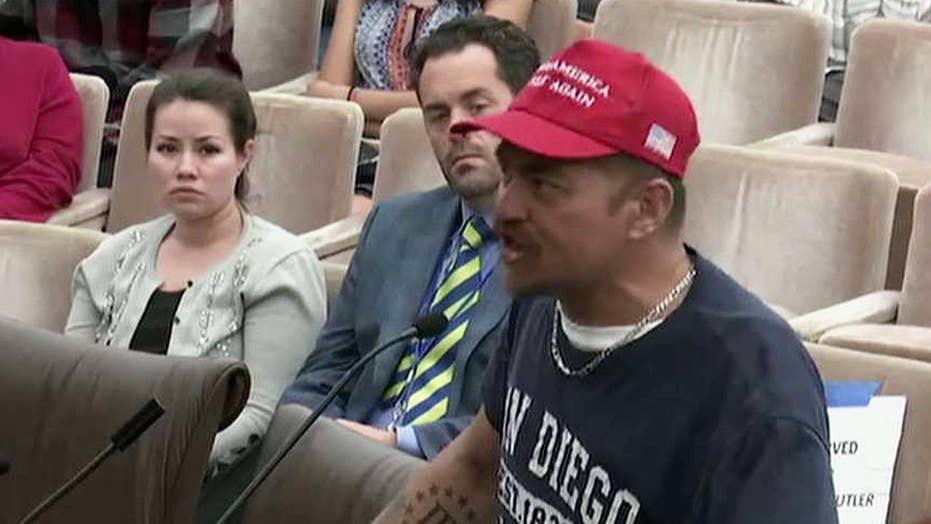 The resistance against California’s “sanctuary” laws is growing, with a city in San Diego County on Wednesday becoming the latest to back the Trump administration’s legal challenge to laws limiting local cooperation with federal immigration authorities.

The Justice Department announced last month that it was filing a lawsuit against California's policies which Attorney General Jeff Sessions said hinders cooperation between federal and local law enforcement and prevents the government from enforcing federal immigration law.

A number of local authorities, particularly in Orange County, have pushed back against the move by the state’s Democratic leadership and have backed the Trump administration’s push against laws they say benefit criminals and makes California streets less safe.

On Wednesday, the Escondido City Council voted 4-1 to file an Amicus Curiae Brief in the administration’s federal lawsuit. The hearing was packed to capacity, and more than 60 members of the local community spoke, with a diverse spread of opinion.

“When you crossed our border, you became illegal and you became a criminal,” one resident said.

“We’re talking about tearing families apart, this is a very real thing,” a resident opposed to the motion said.

Roberto Alcantar, a representative of the American Civil Liberties Union, condemned the move, telling The San Diego Union-Tribune that it was “an offensive endorsement of the Trump Administration’s anti-immigrant agenda.”

Escondido has in turn followed Orange County and Huntington Beach in backing the Trump administration’s lawsuit. There are now half a dozen more cities considering taking action, with San Diego County’s Board of Supervisors scheduled to vote on April 17.

“This is the right thing to do. I was elected mayor to keep the Constitution, uphold the Constitution and keep our community safe, Escondido mayor Sam Abed told Fox News. “I am committed to do that and that is what the council did today.”

The pushback in California has received support from the White House. Last month, Trump said that his administration stood “in solidarity” with what the county was doing.

“My Administration stands in solidarity with the brave citizens in Orange County defending their rights against California's illegal and unconstitutional Sanctuary policies,” he tweeted.

“California's Sanctuary laws...release known dangerous criminals into communities across the State,” he added. “All citizens have the right to be protected by Federal law and strong borders.”