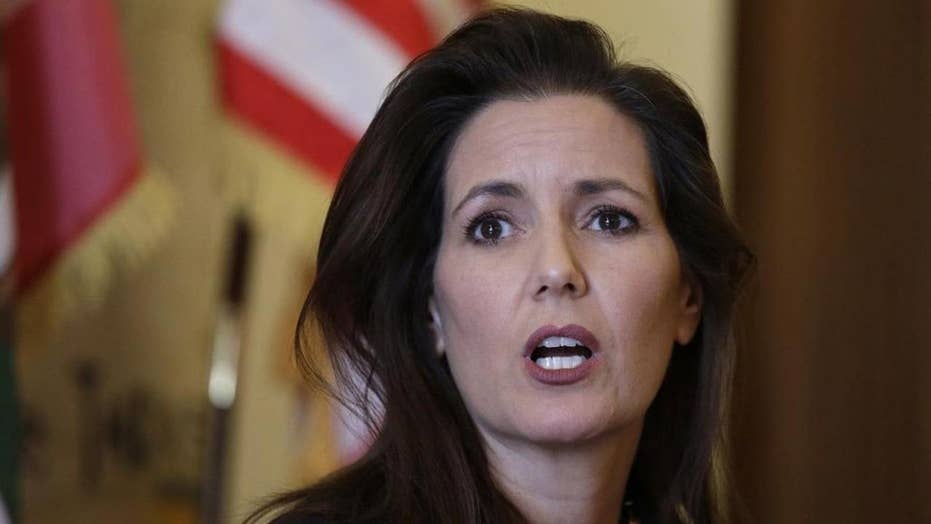 The parents of children killed by illegal immigrants are demanding that the Trump administration take a tough stance against a California mayor who thwarted a federal immigration raid this month -- urging that she face consequences and even jail time.

Oakland Mayor Libby Schaaf sparked national outrage when she pre-empted the raid in Northern California by Immigration and Customs Enforcement officials by announcing it on Twitter.

“How dare you!” Attorney General Jeff Sessions said in a speech last week in which he also announced a lawsuit against California for its "sanctuary" policies -- which limit local law enforcement officials from complying with federal immigration authorities' access to illegal immigrants. 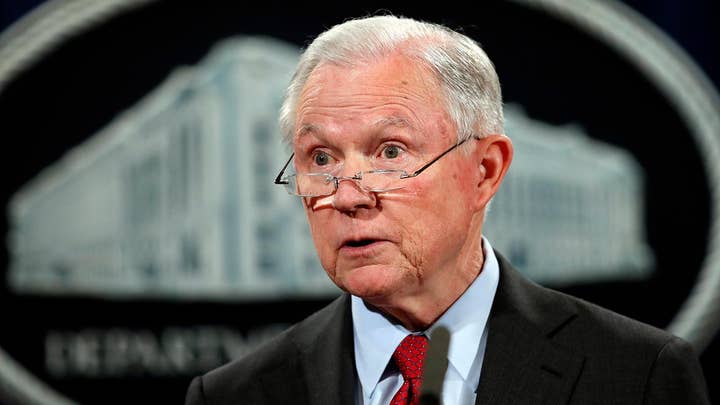 “How dare you needlessly endanger the lives of our law enforcement officers to promote a radical, open borders agenda,” Sessions said.

Striking a similar tone of outrage, President Donald Trump said in California on Tuesday, "What happened in Oakland was a disgrace to our nation.”

Since then, a number of California Democrats have backed Schaaf, while House Minority Leader Nancy Pelosi, D-Calif., slammed the raid as "unjust and cruel." The Department of Justice is reviewing Schaaf’s actions.

As for those who have lost children due to the actions of illegal immigrants -- so-called Angel Families -- they say it’s vital that the administration do something.

Don Rosenberg, an "Angel Dad" whose 25-year-old son, Drew, was killed in San Francisco in 2010 when an illegal-immigrant driver from Honduras hit his motorbike, says that Sessions’ DOJ needs to have Schaaf prosecuted.

Don Rosenberg's son Drew lost his life after being hit by an illegal immigrant. (Don Rosenberg)

“Put her in jail, you’ll see this stuff stop,” Rosenberg told Fox News. “These people aren’t willing to sacrifice their lives and careers for people who are here illegally. They’ll be like cockroaches scattering when you turn the light on.”

Rosenberg said his son was killed after the driver attempted to flee the scene, driving over Drew again in the process. Although the driver entered the country illegally, he had been given Temporary Protective Status (TPS).

Schaaf and other liberal Democrats have claimed that they are working to make communities safer, partly by encouraging those here illegally to cooperate with authorities about more hardened criminals.

"It is Oakland’s legal right to be a sanctuary city and we have not broken any laws," Schaaf said in a statement last month. "We believe our community is safer when families stay together."

Sabine Durden, whose son Dominic was killed in Moreno Valley, Calif., in 2012 when his motorbike was hit by an illegal immigrant with priors including two DUIs, echoed Rosenberg's sentiment, saying that something must be done about rogue Democratic lawmakers.

“When I first heard, I was beside myself, fuming, infuriated and completely outraged about the lawless, reckless and very dangerous behavior of that disrespectful mayor," she told Fox News. "Not only did she endanger ICE agents and law enforcement, but all the citizens not just in her community, but all over near and far."

“If the mayor of Oakland would have opened the back door to a prison or jail and let out dangerous felons, she would have been immediately arrested,” she added. “Why not in this case?”

While the loss of a child is the ultimate nightmare for any parent, in these families' cases the grief is compounded by anger at what they say are regular snubs by Democratic politicians. These politicians, the Angel Families say, ignore their stories and then push legislation that the families insist will only lead to more deaths of American citizens and residents at the hands of people who have no right to be in the country in the first place.

"I wonder if [Schaaf] would defend illegals if one of them had hurt or killed one of her loved ones," Durden said. "The self-serving, unlawful and very disturbing stance and actions of that mayor is a prime example why California is sliding down the edge of insanity."

Jamiel Shaw Sr., whose son Jamiel Jr. was murdered in 2008 in Los Angeles by a Mexican gang member living in the U.S. illegally, has repeatedly expressed his frustration with California. Last week he tweeted an image of a Democratic State Senate candidate's call to "Disobey Trump."

"This is what we have to put up with in California. The Dems' campaign platform is to disobey law and order," he tweeted.

Mary Ann Mendoza's 32-year-old son, Police Sgt. Brandon Mendoza, was killed in 2014 in Arizona by an illegal immigrant who was driving the wrong way while drunk. That driver, who was also killed in the crash, had been living illegally in the country for at least 20 years and had criminal convictions dating from 1994. She says that Democratic lawmakers have tried to ignore her advocacy.

“They don’t even want to look us in the face, they avoid us at all costs,” Mary Ann Mendoza told Fox News. “It would squash their agenda and what they are trying to achieve; they want to act like it doesn’t even exist and that’s why so many of us keep fighting.”

Rosenberg said he was a lifelong Democrat, but was abandoned by people in his party as he says they have become increasingly focused on prioritizing illegal immigrants.

“I was a Democrat my entire life, but they don’t follow Democratic principles, they’re just vote hoarders,” he said. “What message are you sending when you will shut down the entire government to protect DACA recipients?” he added, referring to the illegal immigrants brought to America as young children by their parents.

And by promoting so-called sanctuary policies, the families say they are not promoting safety, but rather allowing more threats onto the streets to put law-abiding families in danger.

“Where is the sanctuary for law-abiding citizens?” said Durden, herself an immigrant who arrived legally from Germany in the 1990s. “Where was the safe place for my only child?”

Laura Wilkerson has pushed for the U.S. to keep Americans safe from illegal immigrants after her 18-year-old son, Josh, was murdered by an illegal immigrant classmate in 2010 in Texas. Josh was tied up, tortured, strangled and beaten until he died, before his body was set on fire.

Wilkerson grilled Pelosi last year at a CNN town hall, where she asked Pelosi which one of her family members she would sacrifice for an illegal immigrant.

"If you need to go home tonight and line up your babies as you say, and your grandbabies, which one of them could you look in their eyes today, and tell them that they're expendable for another foreign person to have a nicer life?” a tearful Wilkerson asked. “Which one would you look to say, you, my child, are expendable for someone else to come over here and not follow the law and have a nicer life?"

“Jeff Sessions has been very quiet and I am hoping that he does more than a war of words; it’s time to do something,” she said. “He’s a good man but we have to take action and show that we are going to stand up to lawbreakers.”

“It makes me angry and it’s time for us to fight now,” she said. “If we lose to this, what else is next?”

But while the families are angry at what they have seen, many of them said repeatedly that they are not motivated primarily by anger or vengeance, but instead to make sure that no mother or father has to endure the heartbreak and grief that they have had to go through.

“I don’t want anyone else to know what this 24/7 nightmare feels like,” Durden said.