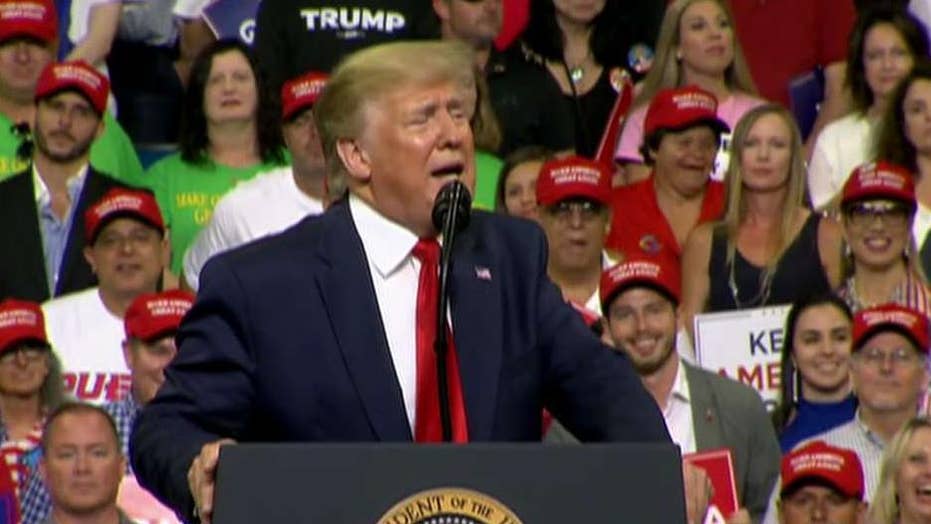 President Trump launched his 2020 re-election campaign Tuesday night in Orlando, Fla., and he once again took aim at his 2016 rival Hillary Clinton, arguing that the Mueller probe was conducted far differently than the FBI investigation of the former secretary of state's private email server.

"If you want to know how the system is rigged, just compare how they came after us for three years with everything they had versus the free pass they gave to Hillary and her aides after they set up an illegal server, destroyed evidence, deleted and acid-washed 33,000 emails, exposed classified information and turned the State Department into a pay-for-play cash machine," Trump said.

"If I got a subpoena for emails if I deleted one email. Like a love note to Melania -- it's the electric chair for Trump," the president joked.

He said there appeared to be a concerted effort to avoid bringing charges in the Clinton case, laying out several actions by top officials that "handcuffed" the FBI's investigation.

"They had an immense amount of evidence and they bent over backward not to make the case. They barely used the grand jury, they left charges on the table that there were very strong criminal cases on," he said.

Conversely, McCarthy said the Mueller investigation involved "no criminal predicate, where they scorched the earth to try to find one."

"Even to the point of dragging out charges like the Logan Act, which is something that hasn't been prosecuted successfully for over two centuries. They used that as a basis to conduct some of the investigation. ... They tried very, very hard to make this case," he concluded.