What’s next for businessman Andrew Yang?

What’s next for businessman Andrew Yang after dropping out of the race for the Democratic presidential nomination?

After running for the highest office in the land, businessman Andrew Yang is reportedly mulling over another run for office -- this time as New York City mayor.

Rumors had been floating around that Yang was considering a run for the top job in NYC after he suspended his presidential campaign following the Iowa caucuses. But BuzzFeed News reporter Ema O'Connor said on Tuesday that she asked the former 2020 hopeful directly when she ran into him on the train.

“You know, we’re looking at it,” Yang told O'Connor.

A source close to Yang did not deny that he was considering mayoral aspirations to Fox News.

Yang also told the BuzzFeed News reporter that the Biden team contacted him in response to a question about if he were "facing pressure" to back the former vice president after Pete Buttigieg, Amy Klobuchar and Beto O'Rourke announced their endorsements. Yang said he considers "Joe" as "a friend."

The businessman became best known this election cycle for Universal Base Income (UBI) that would give every American citizen $1,000 per month and for his "MATH" campaign motto, which was an acronym for "Make America Think Harder." 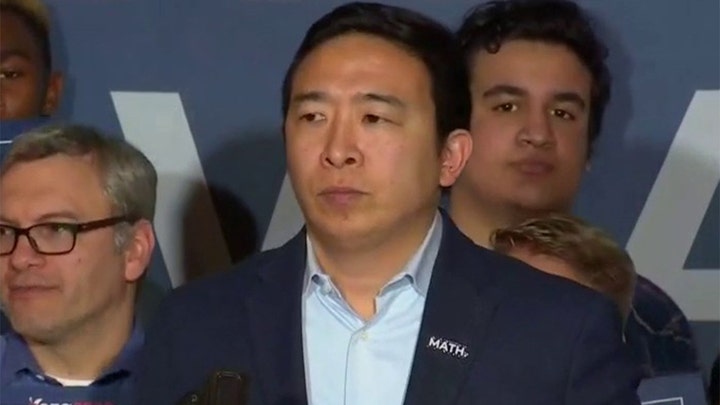 Beginning his campaign with virtually no name recognition, Yang surpassed expectations on the campaign trail, outlasting several sitting and former senators, congressmen and governors. He was also the last candidate of color to appear on the Democratic debate stage.

Yang has since been hired as a CNN contributor.