Republican Senator John McCain was diagnosed with glioblastoma, an aggressive brain tumor, in 2017. In a statement, the McCain family says the senator has chosen to discontinue medical treatment.

The family of Sen. John McCain, R-Ariz., says the senator is suspending treatment for his brain cancer. But it’s notable the statement came from the family and not the senator.

McCain last voted on the Senate floor on an interim government funding bill on December 7 last year. He hasn’t visited the Capitol since.

That said, McCain has exercised significant influence from afar amid his convalescence.

I have tracked McCain’s statements for months. I would take notice if I hadn’t seen a statement from McCain for a while. But then a statement would pop into the in-box.

McCain’s office pushed out statements of late on the Senate’s passage of the defense authorization bill, named after the senator himself. On July 13, McCain weighed in on the indictment of 12 Russian intelligence officers.

“Today’s indictment is a result of the hard work of America’s law enforcement and intelligence officials who dedicate their lives to bringing to justice those who wish to do us harm. These revelations add to a body of evidence confirming an extensive plot by Vladimir Putin’s government to attack the 2016 election, sow chaos and dissention among the American electorate, and undermine faith in our democracy,” said McCain.

On July 12, McCain applauded the House’s passage of a bill to implement a water settlement with Arizona’s White Mountain Apache Tribe.

“The federal government owes it to the White Mountain Apache Tribe to follow through on the commitment it made seven years ago to build the Miner Flat Dam,” said McCain in a statement. “This legislation would resolve the tribe’s claims to the Salt River in Arizona and pave the way for the completion of the Miner Flat Dam and Reservoir, which are key to protecting the Tribe’s at-risk water supply.”

“We urge the Romanian government not to retreat in the important fight against corruption,” wrote the senators.

On August 13, President Trump signed the John. S. McCain Defense Authorization Act into law. In a statement, the senator said he was “humbled that my colleagues” would name the annual defense bill after him. McCain also said the legislation would “help deliver our service members the resources they need to rise to the challenges of a dangerous world.”

And then nothing from McCain until today’s statement from his family.

Conversations about about McCain’s future, health and even the process for a potential successor have been taboo around the Capitol for some time now. Senators who had even visited with McCain were circumspect in their remarks about their colleague. If anything was said, it was done in hushed tones and so far off the record. That’s because everyone on Capitol Hill - ranging from senators to aides to reporters and Senate staff - suspected they’d see a statement like this at some point from McCain’s office. And as much as no one wanted to admit it, they knew it was just a matter of when. 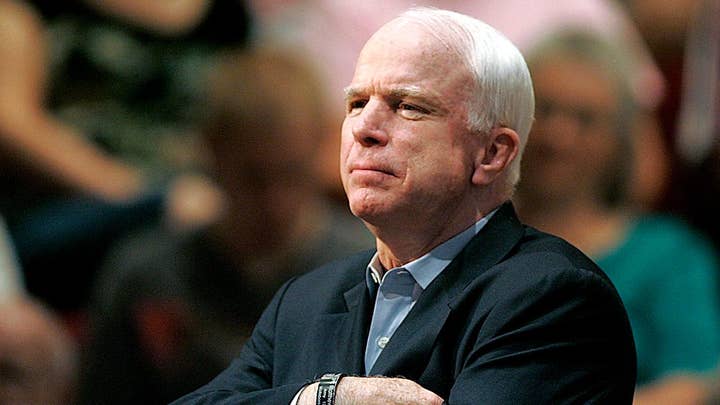 There was a point when some senators, perhaps wishfully, thought McCain may return to the Capitol and even vote. But that was never in the offing.

In May, McCain published a statement announcing his opposition to the nomination of CIA Director Gina Haspel. A former prisoner of war, McCain often spoke about the government’s use of “enhanced interrogation techniques.” After all, no one would say that McCain was subjected to “enhanced interrogation techniques” in Vietnam. McCain was tortured. McCain harbored reservations about Haspel’s role at the CIA when it came to prisoners of war or “enemy combatants.”

“I believe Gina Haspel is a patriot who loves our country and has devoted her professional life to its service and defense,” wrote McCain. “However, Ms. Haspel’s role in overseeing the use of torture by Americans is disturbing. Her refusal to acknowledge torture’s immorality is disqualifying. I believe the Senate should exercise its duty of advice and consent and reject this nomination.”

At no point did McCain suggest he would vote on Haspel nor declare he would “vote no.” The Arizona Republican simply stated what he thought his colleagues should do about Haspel.

A similar scenario played out in July when President Trump nominated Brett Kavanaugh for the Supreme Court. Most senators put out boiler plate statements about “meeting the nominee” or making up their mind after an in-person chat. McCain’s statement didn’t hint at any of that.

“I look forward to the Senate fulfilling this critical duty through a fair and thorough confirmation process,” said McCain.

What’s also interesting is how much sway McCain continued to have on Capitol Hill in absentia. Reporters squawked when President Trump signed the defense bill and never mentioned McCain. Or, there were various occasions when the President appeared at a campaign rally and mocked the senator – also not invoking McCain.

Still, McCain’s absence cast a long shadow through the Senate corridors. Senators listened to him this spring when he expressed concerns about Haspel.

“His opinion carries a lot of weight with a lot of people, me included,” said Sen. Jeff Flake, R-Ariz., in May.

McCain’s absence also amplified the narrow Senate Republican majority. With McCain, the GOP holds a tenuous 51-49 Senate advantage. The difference is but a single vote. This is why the Republican leadership sometimes sweated big votes. It magnified the votes of maverick Republicans who sometimes buck the party: Sens. Susan Collins, R-Maine, Lisa Murkowski, R-Alaska, and Rand Paul, R-Ky.

No event augmented the Republican’s narrow majority more than the abortive effort last summer to repeal and replace Obamacare. Senate Majority Leader Mitch McConnell, R-Ky., made a dramatic, Saturday nightdecision to postpone consideration of the keystone GOP issue once it became apparent McCain couldn’t make it to the Senate to vote. McConnell would need McCain’s vote to to approve a motion to launch the debate. In addition, McCain’s vote was critical to passing the legislation.

McCain returned to Washington some days later and voted to initiate debate on the Republican repeal and replace gambit. And then, finding the bill not to his liking, McCain torched the GOP efforts.

Even frank and reliable Republican sources are resistant to comment about what’s next. But Arizona law works like this: Arizona Gov. Doug Ducey (R) would appoint another Republican until a special election is called in 2020. Arizona law requires the appointee “be of the same political party as the person vacating the office.” Arizona voters re-elected McCain to the Senate in 2016. The winner of the 2020 special election would serve until 2022, the balance of McCain’s unexpired term.