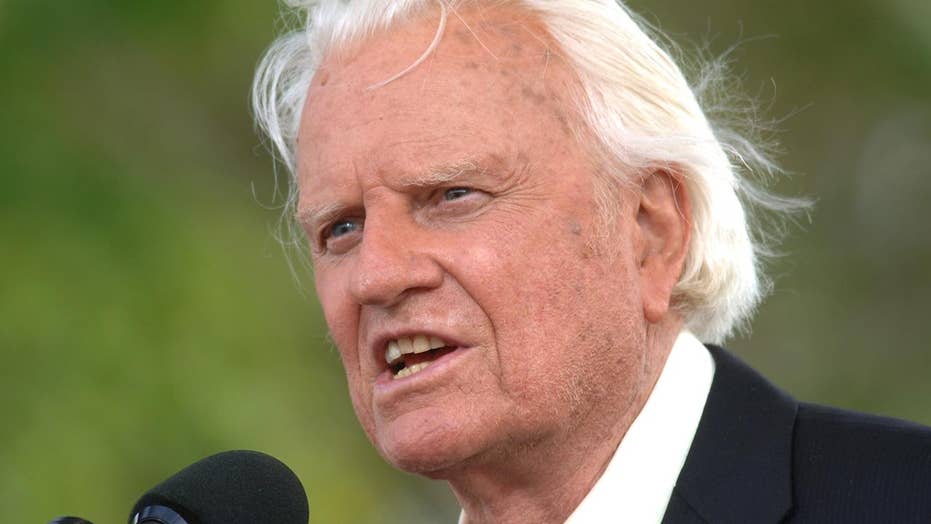 Fox News political analyst and co-host of 'The Five' says Rev. Billy Graham is one of the modern Americans who reshaped the nation; Kayleigh McEnany, RNC spokeswoman, says Graham's legacy cannot be overstated.

Jim Myers drove 10 hours and was the first in line Wednesday to pay respects to the late Rev. Billy Graham inside the Capitol Rotunda.

He made the journey to Washington, he said, because Graham was an “honorable” man and “worth learning from.”

“His desire to share Jesus Christ with others is worthy of emulation,” Myers said.

The Michigan resident was not alone. He joined hundreds -- a crowd expected to soon number in the thousands -- standing in line Wednesday in the shadow of the Capitol dome to see Graham's casket lying in honor.

All were here to say goodbye to “America’s pastor,” who died Feb. 21 at 99. After President Trump and other dignitaries honored Graham's legacy in a ceremony late Wednesday morning, members of the public filed in to do the same.

Myers arrived in Washington on a crisp, sunny morning from his home in Niles, Mich. -- nestled between South Bend, Ind., and the Lake Michigan shoreline.

Myers, a funeral director, said the extraordinary number of people Graham reached over such a long career alone should make him one of history’s most memorable spiritual leaders. But he hopes the world will remember Graham for his “desire to share Jesus Christ and his gospel of love and peace.”

A few yards away, Cheryl Rhoads was holding a picture of a young Billy Graham with her grandparents -- deacons Burton and Amanda Rhoads, who gave Graham his first and only local pastor job, at a church in Western Springs, Ill.

Cheryl Rhoads holds a picture of a young Billy Graham with her grandparents. (FNC)

“He was looking for a job so my grandfather hired him,” said Mark Rhoads, who joined sister Cheryl in line.

Graham and wife Ruth Bell were students at nearby Wheaton College when the Rhoads hired him. And Graham first started performing his popular “Songs in the Night” gospel radio program in the basement of the Illinois church, Mark Rhoads said.

Asked how she felt upon learning of Graham's death, Cheryl choked up.

“Nostalgic and sad,” she responded. “He was part of our grandparents’ tradition, the whole history. It was the last link to our parents.”

Some traveled hundreds of miles to see Graham, while others came from nearby.

Gene Roberts arrived from Baltimore, out of a sense of devotion.

“I came here because I love Billy Graham,” said Roberts, who wore a basketball-style shirt that read “Jesus is God.” “I respect him. That why I’m here today. I love him, and I love him for his love of Christ.”