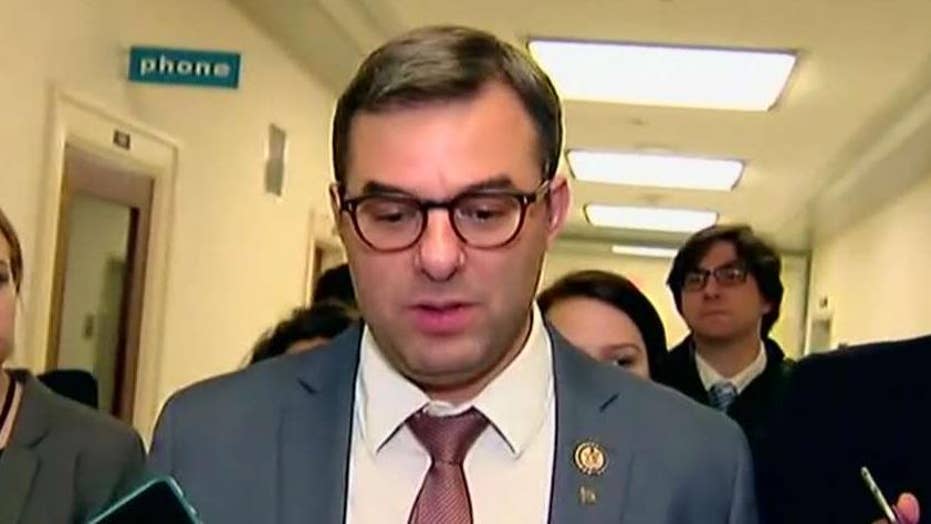 Rep. Justin Amash, R-Mich, clashed with a MAGA hat-wearing constituent during a town hall on Tuesday over his support for the impeachment of  President Trump.

Amash has made headlines in recent weeks for his lengthy Twitter threads laying out his argument for impeachment based on the Mueller Report. His latest tweetstorm took aim at Attorney General William Barr for allegedly misleading the public about Special Counsel Robert Mueller's findings and pushing a "false narrative" that the Trump campaign was improperly spied on during the 2016 election.

She began by telling Amash that she had been a "supporter" of his since he first was elected into Congress in 2010 but now was "disappointed" by his support for impeachment.

"You talk about the Constitution and how important that is, but yet nothing that Mueller came out with in this report, nothing that has been said about him and President Trump is constitutional and has been a smear tactic because that's how the Democrats work," the Trump supporter told Amash. "How can you become a Democrat when we voted for you as a Republican because you've just drank the same Kool-Aid as all the Democrats."

Amash responded by first defending his record in Congress, telling the town hall attendees he has "one of the most constitutionally conservative and fiscally conservative" voting records of all sitting lawmakers and that he's at the top "of nearly all the scorecards" of conservative groups.

"I haven't changed, I’m who I said I was. I’m a principled, constitutional conservative who has stayed consistent regardless of whether we have President Obama in office or President Trump,” Amash continued. "Now, I've heard your comments about the Mueller Report, but you haven't stated any facts. What are the facts that you're disputing?"

Amash also responded to another attendee who accused him of not addressing the alleged "FISA abuses" that are currently under investigation by pointing to his FISA reform legislation that was rejected by the Trump White House.