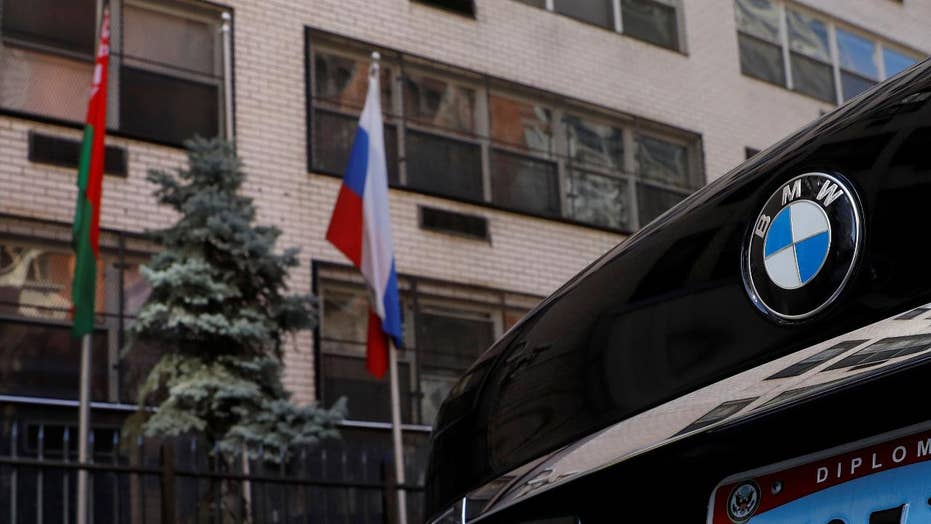 Moscow's foreign minister announces the Kremlin is shutting down the U.S. consulate in St. Petersburg and kicking out 150 diplomats, including 60 Americans; Rich Edson reports from the State Department.

All of the 60 Russians expelled by the United States this week were undeclared “spies” pretending to be diplomats, a senior administration official told reporters on Thursday, saying the Russians were unwelcome -- “persona non grata.”

“These are not diplomats that we expelled. These were intelligence officers that were engaging in activities that were not commensurate with their diplomatic roles and functions at an embassy,” the official said. “And they’re operating under diplomatic cover.”

The decision to kick out 48 Russians from their embassy in Washington, D.C., and consulate in New York City, plus another 12 allegedly working for the Russian Mission at the United Nations, was announced Monday. The 60 Russians had seven days to leave, according to the order.

It came in light of the nerve-agent poisoning of a former Russian double agent, Sergei Skripal, and his daughter, Yulia, in the British city of Salisbury on March 4.

The senior administration official added, “Having these undeclared Russian intelligence officers inside our country is a threat to our national security interest and is one of the points that we’re going to make to our partners around the world.”

Asked if the U.S. was satisfied with the response from Europe, the official called the collective action “an unprecedented show of transatlantic unity” and “an amazing response to a breach of the postwar order.” The official said it could be a turning point in how the U.S. and its allies view Russia's activities in the West. “And so a joint action by a series of countries... sends a stronger message of our unity against the Russians’ abhorrent behavior.”

Questioned about the relationship between the U.S. and the U.K., the senior administration official said the “special relationship is as strong as it ever has been,” and that the “U.K. is and always will remain our strongest ally, rooted in NATO, and before and after its exit from the European Union.”