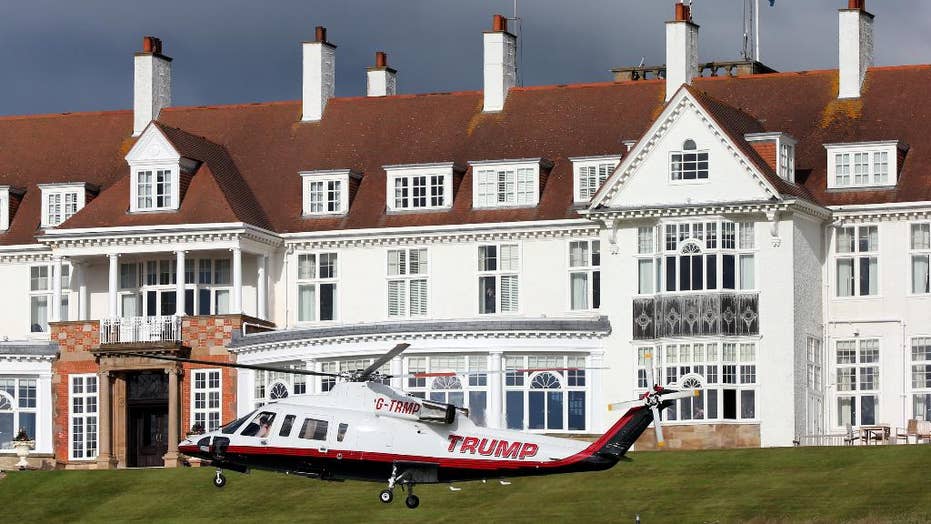 A preliminary Air Force review found that only a small minority of its flight crews on international travel stayed at a Scottish resort owned by President Trump between 2015 and 2019, an official told Fox News Thursday.

The official said that the Air Force had reviewed "the vast majority [of] the 659 overnight stays" near Glasgow Prestwick Airport and determined that “approximately 6 percent of those crews stayed at the Trump Turnberry.” Six percent of 659 is roughly 40 overnight visits to the resort, which is some 20 miles from the airport. The official did not give a more specific figure.

“As a practice, we generally send aircrews to the closest, most suitable accommodations within the government hotel rate," the official added. "The review also indicated that about 75 percent of the crews stayed in the immediate vicinity of the airfield and 18 percent stayed in Glasgow.”

A helicopter owned by Donald Trump departs from the Turnberry golf course in  Scotland in July 2015. (AP Photo/Scott Heppell) (The Associated Press)

The Air Force said Monday it would review the selection of international airports and hotels after Politico reported on a March stay at Turnberry by the crew of a C-17 cargo plane during an overnight refueling at the airport.

An Air Force spokesman said Monday that an initial review of the stopover adhered to all guidelines and procedures, but understood the optics in of service members seeking accommodations at the commander-in-chief’s private property.

"We understand that U.S. service members lodging at higher-end accommodations, even if within government rates, might be allowable but not always advisable,” Brig. Gen. Ed Thomas told The Associated Press.

The Air Force said aircraft, particularly C-17 cargo planes, have increasingly used Prestwick Airport as a refueling stop in recent years. From 95 stopovers in 2015, including 40 overnight stays, the number jumped to 257 last year, including 208 overnight stays.

Through August this year, there were 259 Air Force aircraft stopovers at Prestwick, including 220 overnight stays, according to the Air Force. It said Prestwick is considered a leading choice for reasons such as favorable weather and less aircraft parking congestion. Fuel at Prestwick is purchased at a U.S. government-negotiated rate.

Congress is also investigating stays at the president’s properties by government employees, including Air Force officials, and whether the Turnberry stays violate the emoluments clause, which prohibits government payments to the president outside of his salary. Trump said on Twitter Monday that he had no knowledge of the crew’s stay at Turnberry.