Strategy Room: Brad Bauman and Frank McCarthy weigh in the situation along America's border with Mexico

In the tiny Arizona city of Douglas, a Border Patrol surveillance camera is trained on a 10-foot-high fence with Mexico. After a few seconds, footage shows a figure appearing out of nowhere and the fence suddenly opens to allow a pickup truck through. A car follows, and they speed off into adjoining neighborhoods while the makeshift gate slams shut.

The Wild West still has a foothold here, more than 100 years after gunslingers Wyatt Earp and Doc Holliday called Douglas home. Only the outlaws are cartels and traffickers.

And while President Trump is vowing to step up enforcement and seal off the southern border, agents in Border Patrol say they are still grappling with fallout from the Obama years – which they contend allowed security problems like this to fester.

“We weren’t allowed to do our job,” Brandon Judd, president of the National Border Patrol Council, the border agents’ union, told Fox News.

Judd said the agency is now seeking a “restart” after years of neglect.

In his last term, President Obama’s so-called ‘catch and release’ policies often allowed illegal immigrants to go free awaiting court dates, while most asylum seekers were accepted. The border itself continued to suffer as it has for years from gaps exploited by drug and human traffickers – like the breach seen in the exclusive November 2016 footage from Douglas, Ariz. That ‘gate’ was created by perpetrators on the Mexican side using a blowtorch to cut a metal panel and then affixing hinges and latches. Putty and paint are used to touch up the American side, making the gate almost indiscernible.

WATCH EXCLUSIVE FOOTAGE OF THE BORDER BREACH BELOW 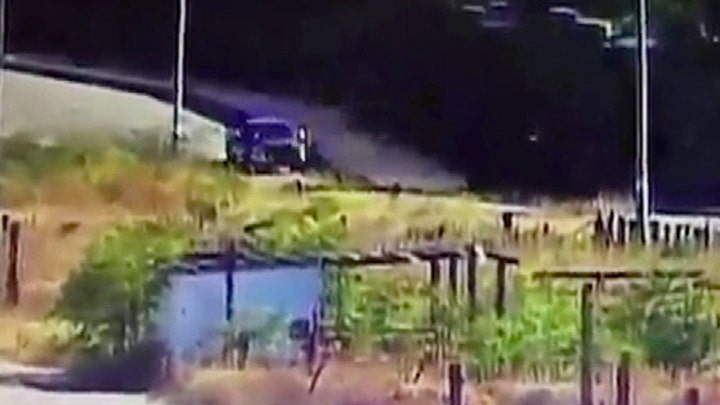 Further, agents have grappled with a shift of resources from the field to the office. According to Judd, only 20 percent of the workforce was actually patrolling the border toward the end of the last administration due to extensive paperwork required to process asylum seekers and high attrition tied to low morale.

“We just cannot continue with the same management that we’ve had, which created our problems,” Judd said. “We expect the president to drain the swamp – ours should be the first one drained. We have to hit the restart button.”

Since taking office, Trump has ordered an end to “catch and release,” and the promise of reinforcements generally has boosted spirits inside the agency.

But even as the new president moves to empower agents, it takes a year to hire and fully train personnel -- so a ramped-up border force is still in the distant future, Judd said.

The Border Patrol currently has 19,700 agents, far below the allotted number of 21,370. Trump wants to hire another 5,000, which is what Judd said is needed.

“We were definitely lacking resources [under Obama],” said a second agent who has worked the Arizona border for more than a decade and did not want to be identified. “Anything that could be done to tie our hands behind our backs was done, no doubt about that.”

While the video showing unfettered access across the Mexican border was shot during the Obama years, agents still encounter this dangerous scenario today: Ingenious border crossers using blowtorches to create gates big enough to allow trucks to pass through.

In areas where the fence is composed of steel mesh, border crossers have cut smaller holes so people can crawl across. Even areas with heavy metal bars (called bollard fencing) prove no match for a torch. Scoping out fence holes and repairing them is a full-time job for agents and welders.

This scenario is the main reason why many border agents support building a wall, not a fence.

“People were cutting through there on a daily basis and it was getting to the point where they were even doing it during the day,” the second agent said.

If not carving through the fence, others would climb over with the help of ladders or grappling hooks – or in some cases, drive over using a ramp.

Illegal immigrants caught by Border Patrol also would create a mountain of paperwork, taking agents off the streets for processing. Those seeking asylum each required three hours of paperwork, Judd said, as agents also made a host of notifications to consulates, the Department of Health and Human Services and legal representation. Whether seeking asylum or not, those in custody were then given court dates and a bus ticket to wherever they wanted.

No one was held in custody unless a warrant showed up on the Department of Justice database. It didn’t take long for smugglers to realize that sending across mules to invoke asylum would create a vacuum of agents at the border so drugs could flow freely – whether carried over, thrown over or flown over, Judd said.

Rep. Louie Gohmert, R-Texas, said immigrants generally need permission to cross from the cartels, which have divvied up the sections.

“I’ve been there when they were detained and asked how much it cost and they paid anywhere from $3,000 to $8,000,” he said. “Those who didn’t have all the money worked it off. Women in sex trafficking and kids and men as drug traffickers.”

“We now have thousands of new gang members thanks to catch and release,” he said.

Gohmert said “demoralized” agents felt like they were “spinning their wheels” these last few years: “They could stay up all night and not stop the people from entering the U.S. The agents knew if they had a big group of people come across, the drugs were going to follow. But they couldn’t watch for the drugs because they had to process all those people – sometimes groups big enough to fill a Greyhound bus.”

Obama staunchly defended his immigration policies during his two terms, including his push to shield from deportation roughly 4 million illegal immigrants living in the United States including parents of legal residents.

When the Supreme Court deadlocked last year, leaving a ruling against the policy in place, Obama called the decision “heartbreaking for millions of immigrants who made their lives here who raised families here” and want to work and pay taxes. He called on Congress to act – but for now, Trump is doing what Obama did, and handling the issue through the Executive Branch.