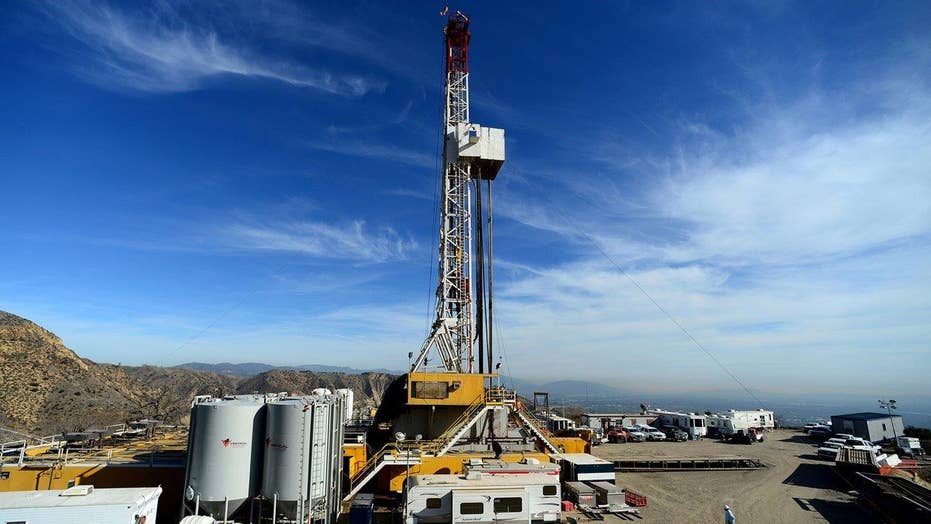 Will Carr reports from Porter Ranch

WASHINGTON – A year after a blowout at a natural gas well near Los Angeles spewed tons of noxious gas and drove thousands from their homes, a federal task force is recommending dozens of safety changes for the nation's 400 underground natural gas storage facilities.

A report released Tuesday recommends that operators of gas-storage sites conduct strict risk assessments and develop robust safety procedures, including ensuring that storage wells have backup systems to contain gas flows in the event of a leak.

The leak at the Aliso Canyon well was the largest-known release of climate-changing methane in U.S. history, spewing an estimated 107,000 tons of methane before being controlled in February. The blowout sickened residents in the Porter Ranch neighborhood and surrounding suburbs. Many complained of headaches, nausea, nosebleeds and other symptoms from the foul-smelling gas.

"Natural gas plays an important role in our nation's energy landscape, and we need to make sure the associated infrastructure is strong enough to maintain energy reliability, protect public health and preserve our environment," said Franklin Orr and Marie-Therese Dominguez, who co-chaired the interagency task force.

The failed Aliso Canyon well was one of 115 wells at a sprawling storage facility operated by Southern California Gas Co. The well was built in 1953 to pump oil and converted in the 1970s to store natural gas. It used a design that made it dependent on a single barrier to contain the gas. When that barrier failed, a blowout reported Oct. 23 spewed methane uncontrollably for nearly four months.

SoCalGas has pleaded no contest to a criminal charge and agreed to pay $4 million in a settlement with prosecutors. The deal requires the utility to adopt a leak-monitoring system at the facility that goes beyond federal and state requirements.

SoCalGas has estimated costs of $717 million related to the leak, including about $500 million to relocate about 8,000 families.

Spokesman Chris Gilbride said SoCalGas has cooperated with the federal task force and is "committed to supporting forward-looking and reasonable regulations that promote safety at natural gas storage facilities." The company has worked with local, state and federal officials to improve safety and enhance technology at Aliso Canyon, he said.

The task force makes 44 recommendations to industry and government regulators to reduce the likelihood of future gas leaks and minimize impacts of leaks that occur.

"No community should have to go through something like Aliso Canyon again," Orr and Dominguez said. "Companies operating natural gas storage facilities should adopt the recommendations as quickly as possible to reduce the risk of future leaks."

Orr is an undersecretary of energy. Dominguez is administrator of the Pipeline and Hazardous Materials Safety Administration.

Dominguez said at a news conference Tuesday that her agency expects to announce interim federal rules for natural gas storage operations by the end of the year. The rules would apply to the nation's 400 underground natural gas storage sites, scattered among 30 states.

Currently there are no federal regulations on gas storage. Regulations are left to states and local jurisdictions.

The report released Tuesday focuses on the 12 largest sites, including Aliso Canyon and another California site, as well as five in Mississippi, three in Louisiana and one each in Michigan and New York.

Aliso Canyon is the largest gas storage facility west of the Mississippi River and a major source of energy for the Los Angeles area. Energy officials have warned of possible power outages if it is not able to resume operations.

But Sen. Dianne Feinstein, D-Calif., said the risks of reopening the site are too great.

"I remain convinced that Aliso Canyon must be permanently closed," she said Tuesday. "A leak in a system with so little margin for error poses a serious threat to public safety."

Mark Brownstein, vice president of the Environmental Defense Fund, an advocacy group that has pushed for stronger safety standards, said the true test will be in the new federal regulations.

Most of the 400 underground storage sites nationwide are decades old and susceptible to corrosion, he said: "The older these systems get, the more leaks and blowouts become a problem. Right now we're effectively crossing our fingers, hoping for the best."