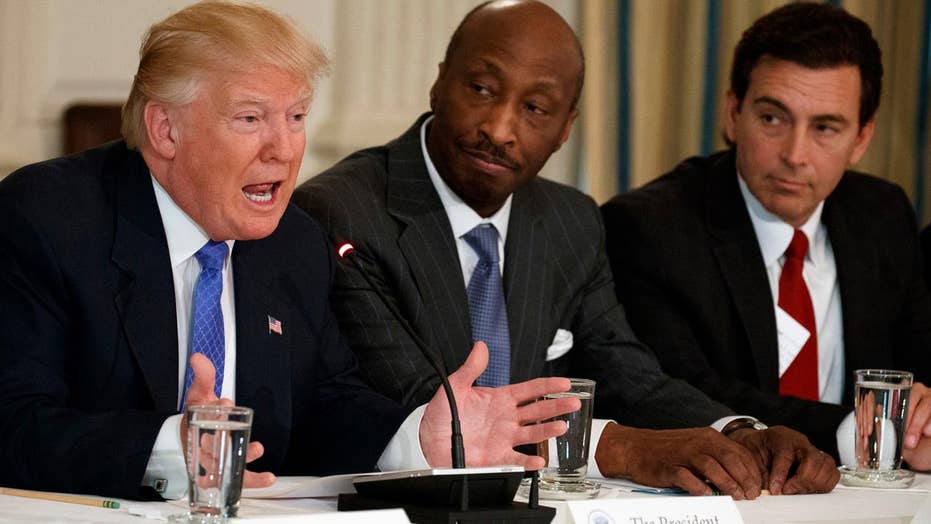 President of the Alliance for American Manufacturing drops from the council

Richard Trumka, the president of the AFL-CIO, announced Tuesday he is following others in resigning from President Trump’s manufacturing council in protest over the president’s response to the deadly Charlottesville violence over the weekend.

“We cannot sit on a council for a president who tolerates bigotry and domestic terrorism,” the organized labor leader said in a statement. “President Trump’s remarks today repudiate his forced remarks yesterday about the KKK and neo-Nazis. We must resign on behalf of America’s working people, who reject all notions of legitimacy of these bigoted groups.”

On Tuesday afternoon, the president inflamed the controversy over his remarks on Charlottesville by blaming “both sides,” echoing the language he had used Saturday when he faulted "many sides."

TRUMP DECRIES ‘ALT-LEFT’ IN CHARLOTTESVILLE: ‘DO THEY HAVE ANY SEMBLANCE OF GUILT?’

Trump said Monday that “racism is evil, and those who cause violence in its name are criminals and thugs, including the KKK, neo-Nazis, white supremacists and other hate groups that are repugnant to everything we hold dear as Americans.”

Earlier Tuesday, Trump lashed out at CEOs dropping out of the American Manufacturing Council, accusing them of grandstanding.

“For every CEO that drops out of the Manufacturing Council, I have many to take their place. Grandstanders should not have gone on. JOBS!” he wrote.

Among those who have recently resigned from the council: Scott Paul of the Alliance for American Manufacturing; Brian Krzanich of Intel; Kenneth Frazier of Merck and Kevin Plank of Under Armour.
The departures have come amid criticism of the president for not initially and specifically condemning neo-Nazis after a car ran into a crowd of counter-protesters at a white supremacist rally in Charlottesville, Va., killing one.