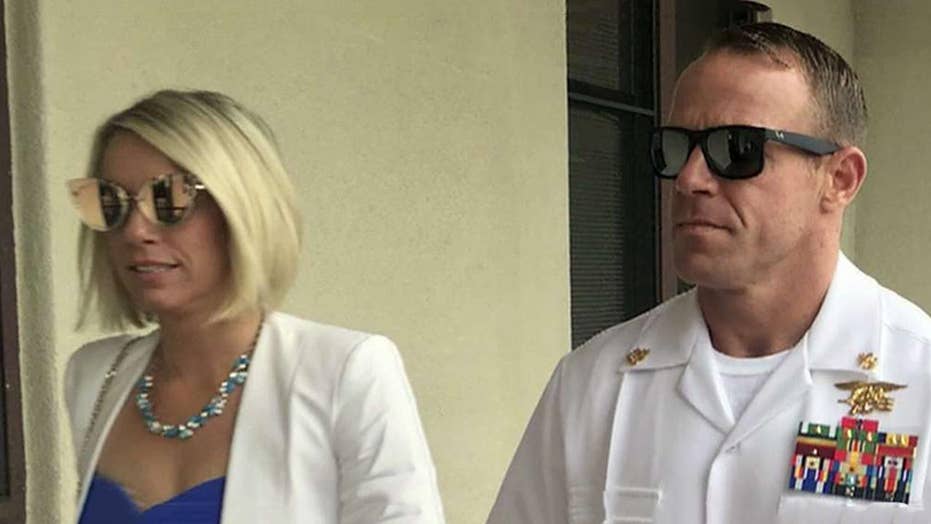 President Trump restored Gallagher's rank earlier this month after the Navy acquitted him of several war crimes; Jacqui Heinrich has the latest on the story.

President Trump has nominated retired Rear Adm. Kenneth Braithwaite to assume the position of Navy secretary after the Pentagon ousted Richard Spencer on Sunday amid the ongoing controversy surrounding the handling of a high-profile Navy SEAL case.

Trump had clashed with the Navy over its plan to convene a review board that could have led to the loss of SEAL Edward "Eddie" Gallagher's Trident pin. The president said Gallagher will retire with the pin, and he's chosen Braitwaite to replace Spencer.

The current U.S. ambassador to Norway and a retired Navy rear admiral, Braithwaite, 59, a native of Michigan, served on the Pentagon's Trump transition team and was nominated by the president to his current role in 2018, after the post had been vacant for nearly two years.

In his capacity as ambassador, Braithwaite scrimmaged with Norway in September after Trump expressed his displeasure that the country's defense spending was at 1.62 percent of its gross domestic product (GDP) -- below the North Atlantic Treaty Organization (NATO) countries' pledge to spend at least 2 percent. Trump repeatedly has called on Oslo to boost its defense expenditures, noting the Scandanavian country's close proximity to Russia.

"Norway is both a founding member of NATO and a key member of the alliance, and is financially capable of meeting these commitments," Braithwaite said. "I have emphasized that it is important for Norway to show leadership and reach the two-percent goal well before 2024."

Braithwaite, if confirmed, would report directly to the president and Defense Secretary Mark Esper to oversee all aspects of the Navy. A 1984 graduate of the U.S. Naval Academy with a degree in political science, he later earned a Master’s degree in government administration from the University of Pennsylvania in 1995.

Braithwaite trained as a naval aviator, and after 21 years of military service, was the first of his class to earn a flag rank.

In his first assignment in 1986, he flew anti-submarine missions as a member of Patrol Squadron 17, stationed at Naval Air Station Barbers Point in Hawaii, tracking Soviet submarines throughout the Northern and Western Pacific regions. After a two-year stint in Naval aviation, Braithwaite became a public affairs officer and rose to chief of public affairs for Naval Base Philadelphia in 1990.

He initially went to work on legislative affairs on Capitol Hill, including strategic communications and public affairs. His job titles included special assistant in the Navy’s Office of Legislative Affairs and director of public affairs aboard the aircraft carrier USS America, before leaving active duty and joining the reserves in 1993.

He assumed command of the Naval fleet tasked with providing support to the joint task force commander at Guantanamo Bay, Cuba, in October 2001, shortly after the terror attacks of Sept. 11.

Braithwaite deployed overseas several times in the Navy reserves. In 2003, he served a naval support role as part of the fleet involved in the initial invasion into Iraq.

A portion of his command supported the naval operations to capture the port of Umm Qasr in March 2003, which marked the first military confrontation during the Iraq War to regain control of a key port that played an important role in the shipment of humanitarian supplies to Iraqi civilians.

He later deployed to assist with relief efforts after a major 2005 earthquake in Pakistan.

Aside from his naval service, Braithwaite also served as executive and state director to U.S. Sen. Arlen Specter of Pennsylvania from 1997-2000.

In March 2007, Braithwaite was named the senior vice president of the Hospital & Healthsystem Association of Pennsylvania and executive director of its Delaware Valley Healthcare Council lobbying group, which represented more than 50 acute-care hospitals and 50 other facilities providing health care services to Southeastern Pennsylvania. That same year, he was promoted to the rank of rear admiral.

Although Braithwaite's tenure in the Navy and public service has been seen as relatively free of controversy, he slammed then-President George W. Bush's proposed cuts to Medicare and Medicaid as "draconian" in 2008.

Braithwaite retired from the Naval Reserve in 2011 as a highly decorated rear admiral, his last post being vice chief of information and head of Naval Reserve public affairs.

Trump announced the nomination Sunday on Twitter, writing: "Admiral and now Ambassador to Norway Ken Braithwaite will be nominated by me to be the new Secretary of the Navy. A man of great achievement and success, I know Ken will do an outstanding job!"