New York City Mayor Eric Adams is ramping up pressure on the federal government to step up and assist with the surge in migrants the city is seeing -- a week after Washington D.C. Mayor Muriel Bowser made a similar plea.

Adams has been sounding the alarm about a spike in migrants coming to the Big Apple, and specifically blaming Texas Gov. Greg Abbott for bussing migrants to the city.

He said on Tuesday that a little over 4,000 have now gone through the NYC shelter system. While that is a fraction of the hundreds of thousands of migrants that hit border states each month, both he and Bowser have complained that they have been overwhelmed.

Adams said he was going to meet with President Biden later this week, and that he would be calling for federal aid.

"We just need help. We need help," Adams said in a press conference. And we're going to have some specific items that we're going to go over with the president. But we want assistance. We believe FEMA should step in."

Both Adams and Bowser have focused their ire at Texas and Arizona for allegedly bussing migrants to their states. Texas has bussed more than 5,000 migrants to D.C. but says it only began sending buses to New York City last week. Arizona has said it has not sent buses to NYC. 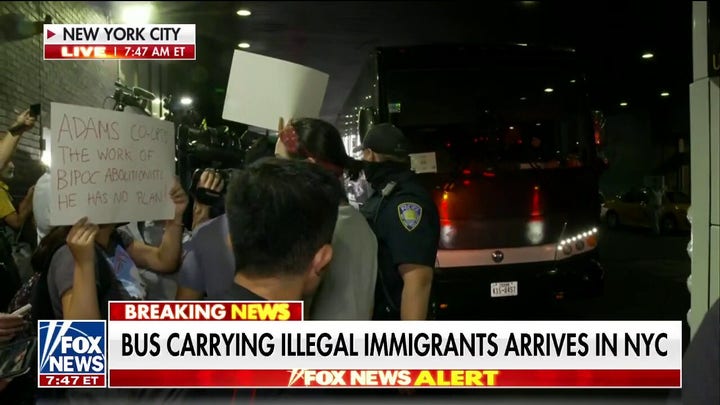 But as Adams has launched into a war of words with Abbott in particular, he has also sought to increase pressure on the Biden administration -- including by calling on NYC’s City Council to urge the federal government and the state of New York to step up.

"The federal government and the state should assist in this as well because it's more than housing…housing, education, food, translation, services, health care, all of these issues," he said.

A White House official told Fox News Digital that the White House has "been in regular contact with Mayor Adams and his team, and are committed to working with them as we do effectively with other local leaders through FEMA funding and other support."

"As we have always said, there is a process in place for managing migration flows, and Republicans governors should stop meddling in that process and using desperate migrants as political tools," the official said.

Adams' call for help comes after Bowser last week called for the National Guard to be deployed to Washington D.C., in addition to the assistance from FEMA the capital is receiving.

"We are focused, and we continue to be very focused on having the federal government do its part and take the lead in what we see as a growing humanitarian crisis with people who are seeking asylum coming across the country to get to their final destinations," Bowser said.

The Department of Defense has since denied that request, saying it would negatively impact the readiness of the Guard and have "negative effects on the organization and members."

A White House official had earlier told Fox News Digital: "We have had constructive conversations with Mayor Bowser and her team, and are committed to working with her and her team just as we do effectively with other local leaders."