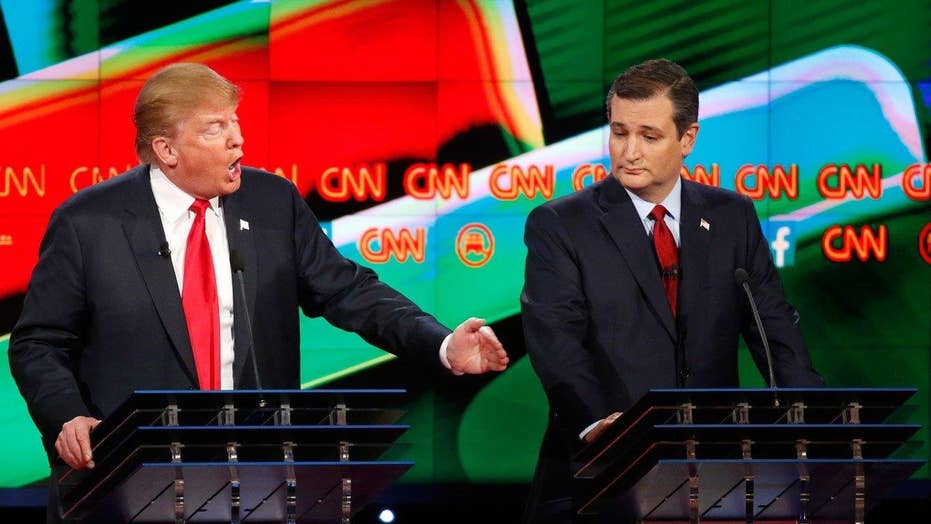 Winners and losers from the fifth Republican debate

From the opening moments of the Las Vegas debate, Wolf Blitzer tried to make it about Donald Trump, whether he wants to isolate America, and whether he is “unhinged.”

Jeb Bush, languishing in the polls, took the bait. Ted Cruz, surging into second place, did not. Marco Rubio, doing well in the polls, also did not.

And Trump, with a huge lead in the national polls, calmly deflected the first attack. As I had predicted on the air, Trump generally avoids bonking his rivals over the head in debate settings, saving his tougher language for interviews and speeches.

The CNN moderators gave the candidates every opportunity to bash each other, and the two Cuban-American senators were happy to answer the call, starting with a spat over NSA surveillance. Trump, defying some pundits’ predictions that he would smack Cruz around, didn’t engage in fisticuffs.

Some takeaways: Blitzer did a solid job in keeping the debate firmly focused on terrorism, a reflection of how fundamentally the Paris and San Bernardino attacks have transformed the presidential campaign. This was a high-stakes encounter on dead-serious subjects.

The entire debate was about projecting strength: against ISIS, against lone-wolf killers, against the Obama administration’s approach.

The debate did nothing to dent Trump’s lead, and Cruz and Rubio lived up to their reputations as the best orators in the field, probably fighting to a draw. Jeb got in a few licks, and Ben Carson wasn’t much of a presence.

After Trump finessed Blitzer’s opening question about his plan to temporarily bar Muslims from entering the country—he shifted to attacking the Iran nuclear deal as “horrible” and “disgusting”—Wolf tried again. Why, he asked Bush, did you call Trump’s plan “unhinged?”

Jeb, rather than seize the moment, began with a wordy response, but then delivered his practiced line: “Donald is a chaos candidate, he’d be a chaos president.” But he looks slightly uncomfortable taking such swings.

Trump was almost dismissive in response, saying “Jeb doesn’t really believe I’m unhinged,” and adding that the former Florida governor was only trying to revive his failing campaign.

Conservative radio host Hugh Hewitt tried, and failed, to entice Cruz into criticizing Trump’s Muslim plan. The senator shifted to President Obama engaging in “double-speak” on Islamic terrorism. Hewitt tried again, but Cruz stuck to his game plan of speaking no evil of The Donald so as not to alienate his supporters.

Cruz tried to sidestep a Dana Bash question on his vote to limit NSA surveillance by saying “the premise of your question is not accurate.” When Rubio criticized Cruz’s vote, the Texan hit back: “Marco knows what he’s saying isn’t true.”

Rand Paul, who barely made the debate cutoff, also whacked Rubio by saying he has more of an allegiance to Sen. Chuck Schumer and his fellow liberals.

That gave Chris Christie, back on the main stage, an opening to take on the squabbling senators, saying: “If your eyes are glazed over like mine…”

Trump’s only moment of agitation came when he scolded Bush for interrupting him, then said he was “a very nice person, but we need toughness.”

“Donald, you’re not going to be able to insult your way to the presidency,” Jeb said, sounding annoyed.

“With Jeb’s attitude, we will never be great again,” Trump said evenly.

The Donald chided CNN in the second hour, though not with Newt Gingrich-like force, calling it “very sad” that the moderators kept feeding the others lines that “Mr. Trump said this”—and were doing it for ratings. He seemed annoyed only when Bush said he doesn’t get his information “from the shows,” Saturday morning or Sunday morning—a reference that most of the audience missed because Jeb didn’t explain it was an old Trump comment.

“I’m at 42 and you’re at 3!” Trump proclaimed, wielding polling numbers as a weapon.

No question the CNN team asked could get the GOP candidates to retreat a centimeter from the tough terror talk.

Would Trump close down the Internet to stop ISIS?

He said it wasn’t a question of freedom of speech: “I don’t want them using our media,” before clarifying that the efforts would be narrowly targeted.

Had Cruz said he would carpet-bomb ISIS until the sand glows in the dark?

He would bomb until we “utterly and completely destroy ISIS,” Cruz said, before clarifying he didn’t mean cities.

Even Carson didn’t flinch when Hewitt, in a question that drew boos, asked: “You are okay with the deaths of thousands of innocent children?”

At times, there was so much tough talk that the rivals’ rhetoric seemed to blur and they canceled each other out.

No one dominated the stage, as in some past debates. Trump went to Las Vegas with a huge lead and leaves the same way. Cruz and Rubio showed up in second and third place, and if their counterpunching changed that equation, it was not immediately evident. None of the other contenders had a breakout moment. And the country got a powerful reminder that we are at war.