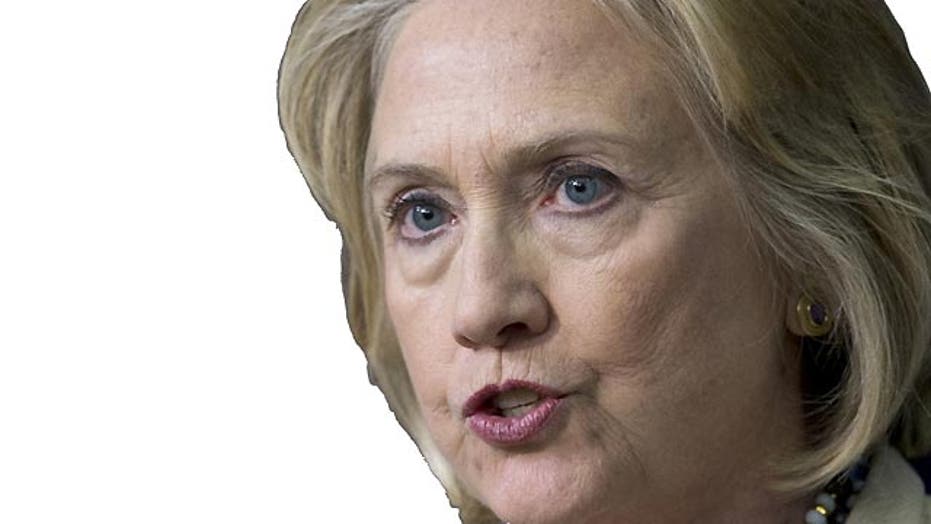 Hillary Clinton too strong, tough, ruthless to be president?

Correction of the week

Deep in a story about the private papers of Hillary Clinton’s closest friend, there is this nugget about the media.

It was 1993, and the first lady was embroiled in what became known as Travelgate, an uproar over the firings of seven White House staffers amid charges the Clintons were trying to take over the travel office. It was the first in a series of controversies, the largest being Whitewater, that would engulf the White House in her husband’s first term, and it caused something of a bunker mentality.

So when Hillary spoke to her longtime Arkansas friend, the late Diane Blair, she was ticked off.

“HC says press has big egos and no brains,” Blair wrote in May, 1993. “That [the White House is] just going to have to work them better; that her staff has figured it out and would be glad to teach [Bill’s] staff.”

These are among the findings in the Blair papers, examined by the Washington Free Beacon. But do these 20-year-old observations have relevance for 2016?

In dealing with the press, I believe Hillary’s reticence stems from those early days as first lady, when she felt unfairly caricatured. And I believe the lingering distrust hurt her in 2008, when she kept reporters at arm’s length and there was plenty of tension between her staff and the press corps.

The headline-grabbing revelation from the Blair papers has to do with Monica Lewinsky, bringing that tawdry episode back into the news not long after Rand Paul brought it up on “Meet the Press.”

For those who believe that Hillary enabled her husband’s misconduct, there is ample fodder here. As Blair wrote: “It was a lapse, but she says to his credit he tried to break it off, tried to pull away, tried to manage someone who was clearly a ‘narcissistic loony toon’; but it was beyond control.”

She added: “HRC insists, no matter what people say, it was gross inappropriate behavior but it was consensual (was not a power relationship) and was not sex within any real meaning (standup, liedown, oral, etc.) of the term.”

Meaning aside, we know one part of that isn’t true.

And for those who recoil at the idea of Bill Clinton as First Man, a 1976 note to an unnamed woman—one year into his marriage—confirms the not-shocking news that he’s strayed for a long time. “By the time I could call last night it was too late and I was too spent. Today is Thursday. I will be at the little place downstairs in the union at 11:30. If you aren’t there, I’ll understand. And if you are, I will.”

What also may be recycled is a 1992 memo to the Clinton campaign from two Democratic pollsters assessing the couple’s weaknesses: “What voters find slick in Bill Clinton, they find ruthless in Hillary.” Of course, voters barely knew her then, and she is a far more established figure now as a former senator and Cabinet member.

And then there is health care. In 1993, Blair wrote, “At dinner, [Hillary] to [Bill] at length on the complexities of health care—thinks managed competition a crock; single-payer necessary; maybe add to Medicare.” Hillary Clinton has said she never supported the single-payer approach. Of course, she never supported it publicly; dinner-party chatter is another question.

Keep in mind that these are the musings of Hillary’s late friend, based on her recollections and filtered through her sensibility.

But what this trove of papers says to me is that Hillary Clinton has a long history of issues that can be used against her in a presidential campaign, and that some of them are personal and entwined with her husband.

Fairly or unfairly, the Clinton camp has to figure out how to deal with such stories, which always get big play in the media because Hillary translates into ratings and clicks.

“She faces a very difficult general election environment if the Republicans nominate any reasonable candidate. This difficult general election environment created in no small part by Obama's two terms in office. Obama, having beaten Hillary the first time in 2008, may actually cause her to lose if she is the nominee in 2016 because independent voters have a strong desire to change from the current incumbent's leadership.”

There is, of course, so much we don’t know. Who, exactly, would she be running against? Hillary vs. Rand Paul or Ted Cruz, or Jeb Bush for that matter, looks very different than contemplating Hillary against some generic figure. Obama himself seemed like a dicey bet for reelection until he wound up running against Mitt Romney.

Still, running to succeed a two-term president of your own party is always challenging. Dowd argues that Bush twice blocked John McCain from the presidency—once by beating him in 2000, and again when his unpopular administration was a drag on the ticket in 2008.

Al Gore couldn’t do it when he was running to succeed Bill Clinton at a time of peace and prosperity. (Of course, Clinton had been damaged by impeachment, and Gore did win the popular vote.)

In fact, the only candidate to pull it off in the modern era was Bush’s father in succeeding Ronald Reagan.

And New York Times columnist Bill Keller, the paper’s former executive editor, is leaving to run a nonprofit startup called the Marshall Foundation, which will focus on the American criminal justice system.

Correction of the week

This is so Joisey: The Newark Star Ledger appended this note to its profile of Chris Christie spokesman Michael Drawniak:

What a crappy mistake!