US, Iran begin talks on reviving 2015 nuclear deal in Vienna

EXCLUSIVE: More than 300 Iranian-American activists on Wednesday wrote to President Biden urging him to support a democratic and secular Iran, and not to ease sanctions until the regime in Tehran ends human rights abuses -- as negotiations on reviving the Iran deal begin.

"Your administration’s impactful actions must be directed towards blocking the Iranian regime’s violation of human rights, and their export of terrorism in the region and beyond," the letter from more than 300 American-Iranians, including physicians, engineers and professors, says. "As you craft your policy, defending human rights and democracy in Iran should be the central and enduring element of your policy on Iran."

US, IRAN DUE TO BEGIN INDIRECT NUCLEAR TALKS IN VIENNA

Iranian Activists Letter to Biden by Fox News on Scribd

The letter is part of a continued effort from pro-democracy Iranian dissidents and groups, who call for a democratic, secular and non-nuclear Iran, to urge the Biden administration to keep up the pressure on the regime, which was dialed up during the Trump administration.

The Trump-era White House adopted a "maximum pressure" strategy against the regime, reimposing sanctions and withdrawing the U.S. from the 2015 Joint Comprehensive Plan of Action -- known as the Iran nuclear deal.

Biden has indicated he wishes to re-enter the U.S. into the agreement, and his administration has abandoned a push at the United Nations to "snapback" U.N. sanctions -- including an expired arms embargo -- on the country.

However, Biden has also indicated that sanctions relief will not happen until Iran is also back in the nuclear agreement -- seemingly ruling out sanctions relief as a precursor to negotiations. The signers of the letter say they are "encouraged" by that pledge, but warn of what they say is a "fable" that there is a moderate faction inside the regime that can be given power.

"After trying to years to find such an elusive faction, the world has realized that the Iranian regime in its totality is an unchangeable dictatorship that cannot give birth to a less repressive government," it says.

The letter calls on Biden to develop a roadmap and policies that "side with the Iranian people and their legitimate desire for a free, secular and democratic Iran, and will end the Iranian regime’s malign and dangerous expansion of its terrorism in the world, and funneling Iranian people’s resources to fund extremists in the region, as Iranians chant ‘leave Syria alone, think about us.'" 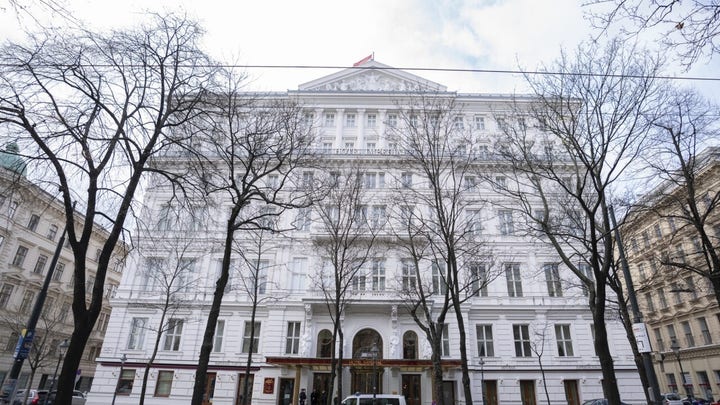 "Furthermore, no sanctions relief or concessions should be provided to the Iranian regime, unless that regime verifiably ends its human rights abuses in iran and terrorism abroad, and abandons its destructive support for proxies in the region," it says.

The letter comes after envoys from Russia, China, Germany, France, Britain and Iran met in Vienna, and as the U.S. was due to start its own indirect talks with Iran -- as part of a global effort to bring both Iran and the U.S. back to the Iran deal.

Professor Kazem Kazerounian, one of the lead organizers of the letter, noted that the talks in Iran are going on in Vienna, where a potential terrorist plot against the National Council of Resistance of Iran (NCRI) in Paris was planned. He said that many of the co-signers of the letter were also targets of the 2018 plot.

"The signatories know the terrorism of the Iranian regime firsthand," he said.