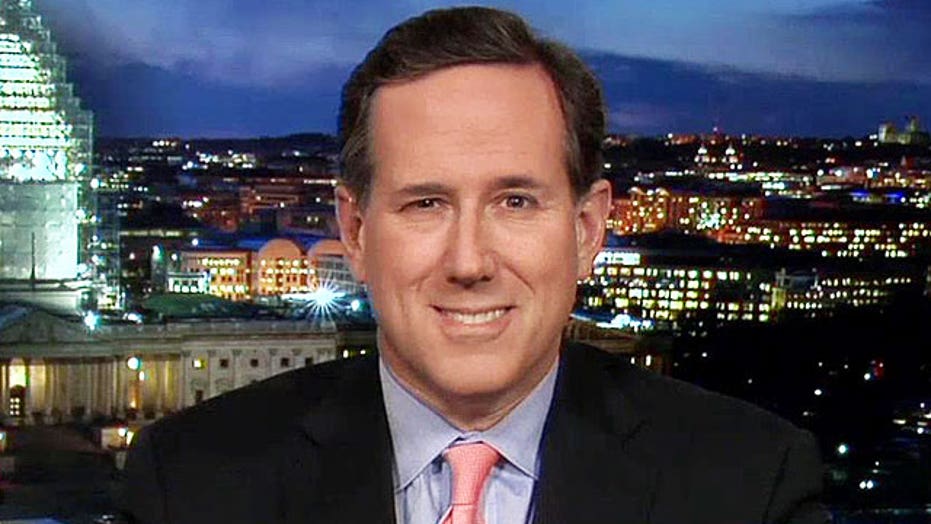 Former senator weighs in on religious liberty debate on 'Hannity'

Potential 2016 presidential candidates have for months test driven their foreign and domestic policy positions in interviews and speeches across the country. But the real test for many voters, as is often the situation, is how the hopefuls respond to world-shaping events.

Most of the debate has been limited to the wide field of potential Republican candidates with ObamaCare and how to handle the growing threat of the Islamic State largely dominating the early part of this year.

And the Obama administration’s tentative nuclear deal last week with Iran has been no exception.

Like all of the potential GOP candidates, Walker has used the agreement to strike a sharp contrast with Democrats.

He also has vowed, if elected, to pull the U.S. from the international deal on “day one” of his presidency.

Jeb Bush, another top potential candidate and a former Florida governor, said the reported details of the Iran deal include significant concessions to “a nation whose leaders call for death to America and the destruction of Israel.”

Texas Sen. Ted Cruz, the only major GOP candidate who has officially declared a 2016 bid, is taking a more reserved approach, saying after the framework deal was reached Thursday that he was still examining the exact details.

However, he has been far more outspoken on the issue of ObamaCare and the threat from the Islamic State and other extremist groups.

To be sure, Cruz has been among the most forceful in his opposition to ObamaCare, considering his efforts in September 2013 to “defund” President Obama’s signature health-care law forced a partial government shutdown.

Nevertheless, the effort, which angered Republicans as well as Democrats, was just one of the first-term senator’s breakout moves that put him on the national political map.

The commitment to repeal the 2010 law, which even remained strong enough last year to help Republicans win the Senate, was largely muted when the Supreme Court decided several months ago to take up the issue of federal subsidies for some ObamaCare insurance buyers.

Still, lawmakers and potential 2016 candidates such as Florida GOP Sen. Marco Rubio have moved to fill the void with a plan if the high court declares subsides in some states unconstitutional.

Rubio, set to officially announce next week whether he will run in 2016, recently outlined his plan in a FoxNew.com op-ed that offers refundable tax credits to help Americans who lose their subsidies to buy health insurance.

“After the downfall of ObamaCare  -- which I believe has been inevitable from the beginning, but may be precipitated by the Supreme Court decision later this year -- a plan such as this will restore our people’s access to quality care,” Rubio wrote.

Louisiana Gov. Bobby Jindal told an enthusiastic crowd at the Conservative Political Action Conference in February that he still wants to repeal “every single word” of ObamaCare.

Former Hewlett-Packard chief executive Carly Fiorina is trying to establish herself within the crowded potential GOP field as the candidate who best understands executive decision making, beyond the being party’s only female candidate so far.

Fiorina also recently told “Fox News Sunday” that she can appeal to voters with her “deep understanding of how the economy actually works, having started as a secretary and become the chief executive of the largest technology company in the world.”

New Jersey Gov. Chris Christie has focused in part on what he considers an under-performing economy under Obama and recently in Iowa discussed a plan to fix the federal tax code, which he thinks would improve the situation for Americans.

He said the country’s 2 percent annual growth in gross domestic product shows the recovery from the recession is "the worst in modern history."

"The fact is that we tax too much in this country already, and we tax in a way that's much too complicated," he reportedly said. "We tax that money at every step along the way.”

The rise and growth of the Islamic State in Syria and Iraq continues to be a global concern, though the re-emergence of Al Qaeda in Yemen has recently dominated headlines.

Dr. Ben Carson, another potential GOP candidate, recently told NBC: “We have to eradicate (ISIS) now. We have to use every means possible to do that."

South Carolina Sen. Lindsey Graham, a member of the Senate Armed Services Committee and one of Capitol Hill’s most hawkish members, has suggested that coalition airstrikes alone will not stop ISIS and told CBS that 10,000 American "boots on the ground" would be needed to stop the Islamic extremist group in Iraq and Syria.

Kentucky Sen. Rand Paul says he has been mis-characterized as an isolationist and that his plan to defeat ISIS would largely be based on arming the Kurds, the disenfranchised ethnic groups in Iraq that has been successfully fighting ISIS for months.

“The only people over there that can fight and have been showing some ability to fight are the Kurds,” Paul told Yahoo News. “The president has been sending weapons to Baghdad. They’re not adequately getting to Kurdistan. I would fund them directly. I would take some of the weaponry that we have left over in Afghanistan and I would send that directly to the Kurds.”

The law prohibits the state and local governments from infringing on a person's religious beliefs without a "compelling" interest. Critics say it opens the possibility that businesses could discriminate against gays, lesbians and others.

“It's never been used for that purpose,” Santorum said Wednesday on Fox News' “Fox & Friends.” “This law is not a new law. … I voted for it, and so did almost everybody else in the Congress. We believe that the First Amendment should be in practice in America, that people should have religious liberty. ... It doesn't mean that automatically anybody who claims a religious exemption of cause wins the debate. It says it has to be considered.

A similar federal law was sign in 1993 and Arkansas lawmakers passed their version last week.