ADVERTISEMENT
A 2015-2016 Fulbright Scholar, William Doyle served as director of original programming and executive producer during his seven years at HBO. He is the coauthor, with former U.S. Navy SEAL Chris Kyle, of the New York Times bestseller "American Gun: A History of the U.S. in Ten Firearms." His other books include "A Soldier’s Dream: Captain Travis Patriquin and the Awakening of Iraq," "An American Insurrection,"" Inside the Oval Office (a New York Times Notable Book), and "A Mission from God" (with James Meredith). He was co-producer of the PBS special, "Navy SEALs: Their Untold Story," for which he co-wrote the companion book. 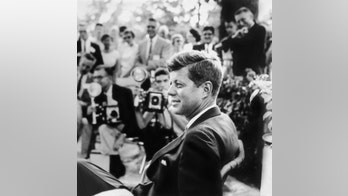 Today, “the story” is everything in Presidential campaign politics. It is the narrative of personal struggle, courage and achievement that defines a candidate, and it is largely what the electorate votes for. U.S. Senator John F. Kennedy rode one moment from his “creation story” all the way to the Oval Office, where he became America’s most popular modern president.