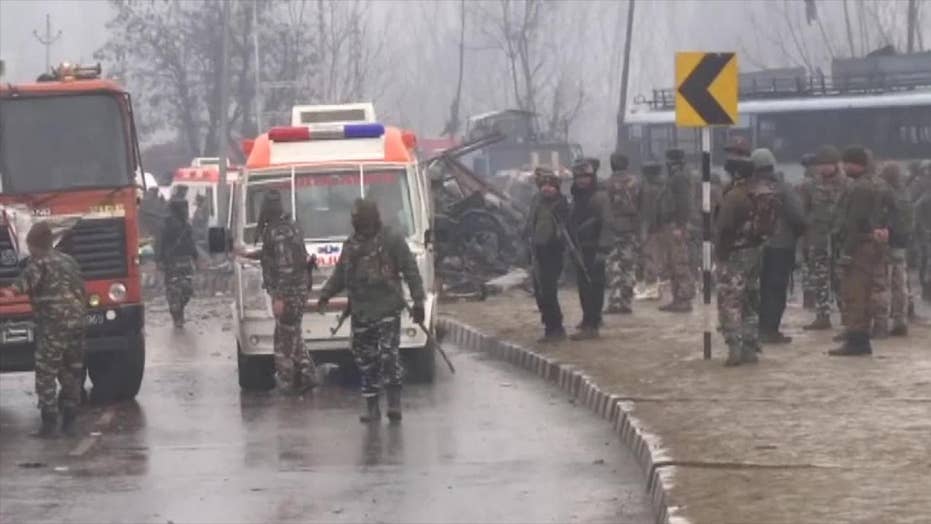 Raw video: Indian soldiers patrol area where a car bomb attack occurred along a highway on the outskirts of the disputed region's main city of Srinagar.

A terrorist attack in India turned into a really bad day for Pakistan. By tolerating the actions of Islamist radicals, the country runs a serious risk of international isolation.

Jaish-e-Mohammad (JeM), an Islamist militant group based in Pakistan, said it was responsible for the February 14 suicide bombing in Kashmir. Pakistan’s intelligence service has long been linked to the group, and Indian intelligence claims its neighbor encouraged JeM to launch the attack, both as a recruitment tool and to fuel tensions in the on-again, off-again terror campaign on India’s frontier.

Why Pakistan might choose to ramp up tensions now is a subject of some speculation. Perhaps Islamabad has been emboldened by U.S. peace talks with the Taliban, believing that Washington needs them to seal the deal, enabling President Trump to make good on his desire to draw down U.S. troops.

The line of thinking might have been that the U.S. wouldn’t risk chiding Pakistan over a little terrorism if the Americans needed their help in the peace talks.

If that was the calculation, it doesn’t appear to be adding up. The U.S. quickly condemned the attacks and fingered Pakistan as the responsible party.

The Americans were also unmoved by Pakistan’s faux post-attack crack-down moves, taking over JeM headquarters and detaining the group’s leadership. Pakistan has done this before, and when the crisis passes, everything goes back to business as usual, with JeM allowed to operate as freely as before.

Perhaps most significant was what Washington did not do. Unlike in the past, the U.S. hasn’t publicly implored the Indians to “show restraint” in responding. “India is looking at something very strong,” President Trump explained. “India just lost almost 50 people with that attack so I can understand that...but there's a very delicate balance going on right now."

Interestingly, this response is likely to help deescalate the crisis. With international support to take action, the Indians may be less likely to do so. They now won’t feel like they have to do something to prove that they have right to do anything.

There are a couple of lessons to be learned from all this.

What’s next? India seems content with the knowledge that Pakistan has done more damage to its international standing than a shelling from Indian artillery.

One is that the U.S.-India strategic partnership is solid and getting stronger. The U.S. response can only build more trust and confidence between the two capitals. That’s a big point for the Trump administration, which looks to partner with India to help deal with China.

The response also suggests the Trump administration isn’t entirely sold on Pakistan’s effort to position itself as kingmaker in talks with the Taliban. Pakistan has tried to use its leverage over the Taliban to ease pressure from Washington before but has consistently failed to deliver.

Finally, Pakistan has to feel it is in a worse position now than before the attack. Only two things really freak out Islamabad: pressure from the U.S. and indifference from Beijing. In this case, they got both. Washington gave Pakistan the cold shoulder, and Beijing couldn’t stop strong, condemning statements from international organizations like the UN Security Council and Financial Action Task Force, an inter-governmental body countering terrorist financing and money laundering.

Now the question is: What’s next? A kinetic response from India doesn’t seem likely in the near future. India seems content with the knowledge that Pakistan has done more damage to its international standing than a shelling from Indian artillery.

Without question, though, the Indians would like the U.S. to build on the momentum. The U.S. could push the Financial Action Task Force to blacklist Pakistan for funding terrorism and money laundering. Washington could also lobby against another IMF bailout for Pakistan. Or, it could sanction serving and retired Pakistani military officers with ties to terror groups. All these actions would make Washington more friends in New Delhi.

At the same time, the U.S. must not completely turn its back on Pakistan. The Pakistani people deserve better. There is a constructive future for South Asia where Pakistan and India live together in peace and prosperity. The best U.S. policy is to continue to work for that day, a day that will never come if Washington stops engaging with Islamabad.

For now, Trump’s tough love policy is exactly right. The administration just needs to deliver more of the same.