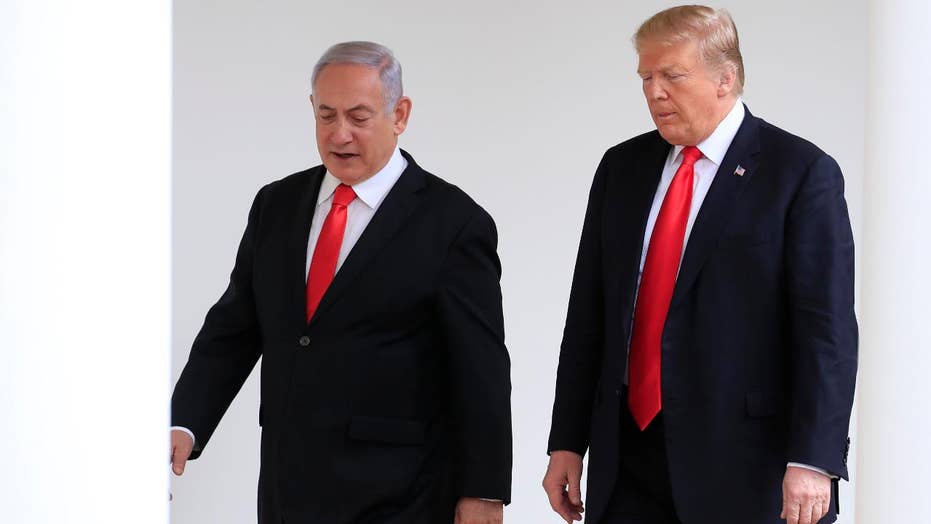 Trump on Mueller probe: We can never let this happen to another president again

'It was a false narrative, it was a terrible thing,' President Trump tells the press while meeting with Prime Minister Netanyau in the Oval Office.

They say victory has many fathers, but failure is an orphan. Yet the debunked collusion conspiracy is the child of many fathers – a Democratic establishment determined to win at all costs, a biased and compliant media willing to prostitute itself to push the Democratic narrative, and individual politicians blatantly lying to the American people night after night, promising that a rigged justice system would deliver through the collusion hoax the results that Hillary Clinton failed to achieve at the polls – the unseating of Donald Trump.

And, yet again, President Trump managed to confound his enemies and emerge not only vindicated, but also doing crippling damage to his critics. No doubt the president and his family and those under the special counsel’s scrutiny were relieved that our long national nightmare was finally over. But is it?

So many questions remain unresolved. Who ordered this coup against Donald J. Trump, and who were/are the conspirators? What role did the Obama White House play in unmasking General Flynn and spying on Carter Page and potentially others? What lies were told by senior Department of Justice (DOJ) officials to the FISA court in warrant applications? How dirty were the many senior FBI officials who violated department rules by using fabricated evidence passed through the DNC, Clinton campaign, Fusion GPS, Perkins Coie, and Christopher Steele to go after a sitting president?

How many DOJ and FBI officials lied to supervisors and leaked to the press to taint public opinion? What was the real scope of the Mueller investigation (not the truncated one publicly announced by Deputy AG Rosenstein)? What’s in the classified evidence that has been shown to certain members of Congress but hidden from the American people? Who told former FBI Director James Comey to protect Hillary Clinton from prosecution, and what relation did that cover-up have to the collusion conspiracy to unseat Donald Trump?

Democrats and the mainstream media greeted the news of President Trump and his campaign’s exoneration from the false charges of “Russian collusion” with varying stages of denial, disbelief, shock, and indignation. Some, such as Reps. Jerry Nadler and Adam Schiff, who have bootstrapped their careers to their daily collusion/obstruction demagoguery, immediately vowed to fight on, like the Black Knight in Monty Python, limbless and yet defiant.

Others cling to the hope that Trump will be prosecuted by the Southern District of New York for other unrelated crimes – but they should remember that no such prosecution can or will take place without the blessing of the Attorney General, who just cleared Trump of the collusion charges.

It is slowly dawning on the American people that they have been lied to again and again by elected officials condemning the president on a daily basis with dark, evidence-free hints of their “knowledge” of the information that’s “going to drop” once the Mueller investigation concluded. Any good trial lawyer knows that you never promise, in your opening statement, evidence that you don’t actually have – but that is exactly what Adam Schiff, Eric Swalwell, Jerry Nadler, Richard Blumenthal, Ron Wyden, and others, who should have known better, did again and again on national television – slyly promising that they had the goods on Trump, and that he and his family members would soon be exposed as traitors. Their constituents should hold them accountable for their repeated lies.

We will not truly have accountability – much less justice – until all these secrets and lies are fully exposed.

Our national media will never be the same either after this debacle. Once respected as independent arbiters of the truth, fact-finders, illuminators of darkness, it’s as if when it came to Donald J. Trump, the establishment media collectively lost its mind. The New York Times wrote 1,156 stories mentioning the Mueller investigation; CNN ran 1,965 stories mentioning the Mueller investigation; and MSNBC wrote 4,202 stories mentioning it – all while ignoring the president’s successes on tax cuts, defeating ISIS, and making historic strides in jobs and opportunity for all Americans.

Night after night, television hosts ranging from malicious to merely ill-informed, allowed their airtime to be hijacked by the planted false narrative that our president was a Russian stooge, a traitor, engaged in a cover-up – when in fact it was the media that betrayed the truth and their audiences.

Even after the Mueller and Barr announcements of no collusion or obstruction, mainstream media hosts remained in denial and clung weakly to the hope that the president would still face trouble and indictment elsewhere. As a nation we have come to the point where our Fourth Estate is bemoaning the fact that no American colluded with Russia to interfere in our elections.

If “Democracy dies in darkness,” as the Washington Post archly reminds us, where are we today when only a handful of journalists on a limited number of outlets were prepared to buck the trend, dig for the facts, question people in power, and report the truth? The disease of Trump Derangement Syndrome is so virulent, that an NPR journalist actually asked me if I thought that President Trump owed Robert Mueller an apology!

Not only does the president not owe Mueller and his gang of legal hitmen an apology for criticizing them – the special counsel team, and the dirty cops at the FBI and DOJ, owe President Trump, Carter Page, Michael Caputo, Hope Hicks, White House Counsel Don McGahn, Reince Priebus, and many others in the president’s orbit, an apology for wrongfully dragging them into this baseless investigation, for smearing and harassing them, for causing some to go into crippling debt to prove their innocence against fabricated charges.

They will never get these last two years of their lives back. Even Paul Manafort, Rick Gates, Roger Stone, and others who pled guilty to either process crimes or unrelated offenses they never would have been prosecuted for had they not been supporters of Trump, are owed apologies for the way that justice was perverted by selective prosecution to put pressure on them to “compose” or bear false witness against the president. Paul Manafort was held in solitary confinement as if he were El Chapo, and relentlessly pressured to lie about the president – but he refused and was punished for it.

Former intelligence officials including John Brennan and James Clapper loudly repeated lies about the president every day, adding the gravitas of their titles to the pile-on against him. What does it say about the integrity of our intelligence services that these men were recently in charge of them? We are better than this.

Conclusions of finality and “let’s put it past us” by supporters of the president are premature. In order to ensure that this utter travesty of justice is never repeated, it is important for the Department of Justice to clean its own house, get rid of the bent cops in the FBI, show the underlying evidence that may be legally released to the American people, and investigate and prosecute to the fullest extent of the law the government officials and their accomplices who conspired to bring down a presidency through their concerted, organized, and persistent lies.

We will not truly have accountability – much less justice – until all these secrets and lies are fully exposed.