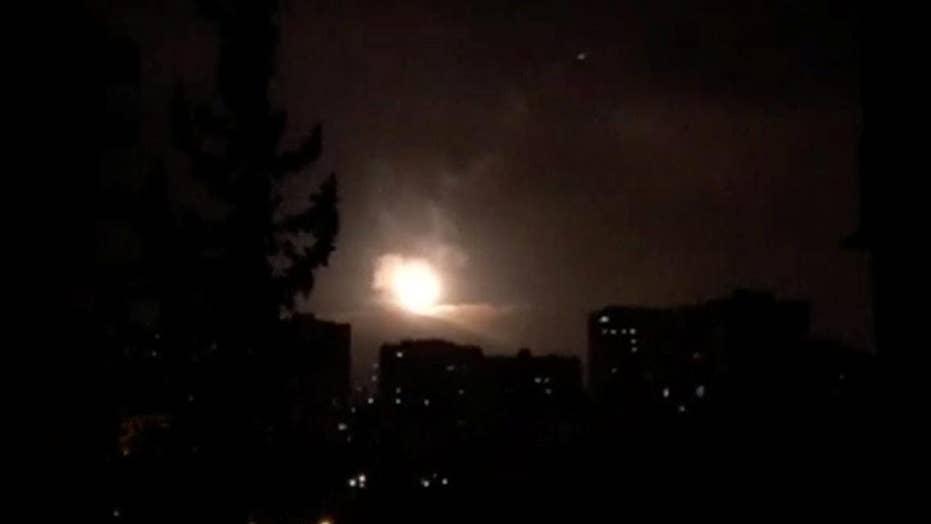 The United States, France and the United Kingdom hit the Syrian capital in response to the use of chemical weapons; Jennifer Griffin shares latest details.

By firing 105 missiles at Syrian chemical weapons targets before dawn Saturday, the U.S., Britain and France sent a clear message to dictator Bashar Assad: they will not tolerate his regime’s use of toxic gas and other weapons of mass destruction against his own citizens.

But it seems the tripartite alliance is prepared allow Assad to keep killing Syrians on massive scale using conventional weapons. The death toll in Syria after seven years of war is more than 500,000 – and rising. The fact that these deaths did not involve chemical weapons makes them no less tragic for their victims and surviving loved ones.

It’s hard to know exactly how many of the Syrian deaths have been caused by chemical weapons. But we know they represent a relatively small percentage. The Assad regime has killed far more Syrians through crude barrel bombs, mass executions, starvation and deprivation, and in other ways.

On top of this, there have also been conventional military strikes conducted with and without the help of Assad’s allies – Iran and Russia. Both those nations have devoted significant resources to the war.

So despite the new attack announced by President Trump, the Syrian-Iranian-Russian conventional war machine that is responsible for the overwhelming majority of the murders of innocent Syrians remains intact. And it is not being threatened by America and our allies.

Of course, President Trump has conveyed his utter contempt for Assad and the forces backing him. He has called Assad an “animal,” and he has called out Iran and Russia as being “responsible” for backing him.

But President Trump remains ambivalent about crafting a foreign policy that would prevent those three nations from continuing their slaughter. Just last week, the president vowed to pull America’s estimated 2,000 troops out of Syria “very soon.” This announcement was certainly welcomed by Assad and his allies.

President Trump’s advisers have apparently convinced him to leave U.S. forces in Syria for a little while longer to battle the Islamic State. But administration officials are assiduously avoiding the question of the post-Islamic State reality – namely that Iran, Russia and Assad are poised to grow stronger and keep on killing Syrians until Assad has crushed opposition to his rule.

To be fair, the crisis in Syria is not of President Trump’s making. He inherited that disaster from President Obama. But keeping a narrow focus on the Islamic State and chemical weapons while ignoring the rest of the bloodshed is actually perpetuating President Obama’s horrendous policies.

The U.S. policy of focusing only on stopping Assad’s chemical weapons attacks is a recipe for more misery, death and destruction. It’s also an abdication of American leadership.

With the world now focused on the atrocities in Syria, the time is right for President Trump to retool America’s policy there. Such a course correction need not lead America into another Middle East quagmire.

What is needed now is a strategy that enables the United States and its allies to make it increasingly more difficult for Syria, Iran and Russia to operate on the battlefield.

There are those who warn of a direct clash between the United States and Russia or Iran. And those concerns are valid. That’s why it’s time we examine the vulnerabilities of Hezbollah, the terrorist military force from Lebanon that is Iran’s lethal proxy in Syria.

Hezbollah has deployed thousands of fighters to Syria to attack the Syrian opposition to Assad. Similarly, we need to look at ways to undermine the scores of Shiite militias that Iran has assembled to fight in Syria in support of the Assad dictatorship.

We also need to revisit once again the idea of creating safe havens for Syrians and no-fly zones to protect them. And we need to think creatively about other ways to minimize the abilities of Russia, Iran and Assad to slaughter more Syrians – all without committing to occupy or rebuild the country.

The United States, France and Britain acted morally and responsibly by striking Bashar Assad’s chemical weapons program in Syria. But without a broader strategy, our air strikes will send the wrong message: that we are not concerned about the vast majorities of mass atrocities that have become commonplace in Syria for the last seven years.

Jonathan Schanzer is the senior vice president for research at the Foundation for Defense of Democracies (FDD) and author of “State of Failure: Yasser Arafat, Mahmoud Abbas, and the Unmaking of the Palestinian State.”