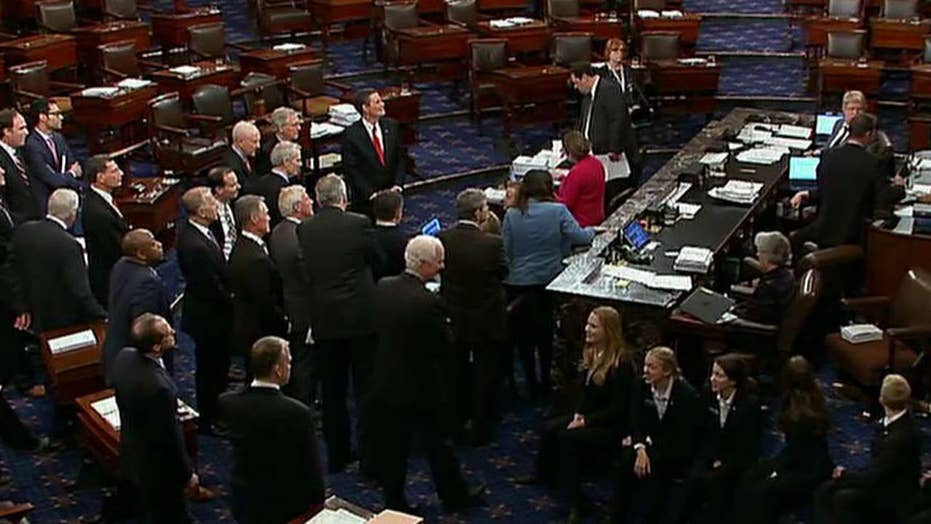 Peter Doocy reports on the preparations on Capitol Hill.

Tax reform should reward individual risk-taking and initiative. The investor who puts the fruits of her labor on the line should not be straitjacketed by accounting rules that are better suited for measuring the value of corporate inventory, or sticking a price tag on a pile of widgets. Yet, this is exactly where one provision of the Senate version of tax “reform” is headed.

In the course of giving many taxpaying Americans a rate cut in one hand, the Senate proposes to punish them with the other. As things stand now, the Senate’s version of tax reform would impose rigid accounting standards on the sales of securities by individuals, which rules would effectively deprive small investors and American workers of their well-deserved profits. Specifically, under the Senate bill, individual stock sellers would be forced to use what accountants call the “first-in-first-out” or FIFO method of pricing stock when calculating what they owe to Uncle Sam.

Obviously, when an investor holds a single position in a stock that is not a problem.   But when investors sell off securities in which they hold more than one position in the same investment, the FIFO rule is more than just a headache. Rather, it is unfair and unreasonable.

Unfair and unreasonable? Yes, on both counts.

The Senate’s bill would dictate how individual investors are required to account their stock sales, but would grant professional fund managers broad latitude in electing the accounting method of their choice. Right off the bat, this would skew the playing field. Individual investors would be left to absorb an even greater degree of risk, all for the sake of $2.4 billion in added tax revenue over a decade. In the world of federal budgets, that’s chump change.

Unlike sophisticated investors with their battery of tax lawyers and experts, Middle America lacks the time and wherewithal to continuously structure their investments with an unblinking eye focused on the tax code.

But beyond favoring professional managers over individual investors, this ill-conceived legislation would actually amount to a tax hike. Let me explain.

Right now, the Tax Code grants individual investors the right to choose how they wish to account for their disposition of their securities. But if the Senate provision becomes law, individual investors would be compelled to sell off the first-purchased block of stocks regardless of costs and economic realities.

And the reality is this -- over the past eight years, since the stock market hit its Great Recession lows in 2009, stock prices have more than quadrupled. Significantly, this growth in stock price has real tax consequences under the proposed law.

For example, an American worker who invested in his employer through automatic payroll deductions would likely face a heftier tax bite if he were compelled to first pay taxes on stock gains arising from his 2009 stock purchases than if he were permitted to attribute his gains to securities purchased at a later date. Against this backdrop, the Senate bill’s FIFO methodology can only be viewed seen as a disguised tax.

Indeed, the contemplated FIFO rule would unduly impact middle-income Americans and recent retirees. Unlike sophisticated investors with their battery of tax lawyers and experts, Middle America lacks the time and wherewithal to continuously structure their investments with an unblinking eye focused on the tax code. For them, investment is less about profiting from slight upticks in the market, and more about a commitment to a disciplined and reasoned reward. A nondiscretionary FIFO regime for individual investors would jeopardize those hard-earned expectations.

To drive the point home, gains from real estate, private equity investments and art are not slated to be subject to this proposed change in the law. In plain English that translates into one rule for the rich, and another for the working stiff. Economically, that route is unjustifiable; politically it borders on the senseless if not the suicidal. Individual investors should not be driven away from the market for the sake of plugging a budgetary rounding error. Equity demands fairness.

At a time when economic growth is experienced unevenly, the tax laws should be a vehicle for rewarding risk, as opposed to punishing thrift and savings. If America is to robustly compete, we need tax laws that encourage savings. Right now, China is out-saving us by more than five-to-one, with a savings rate of nearly 30 percent. It’s time for America to get smart and say “no” to mandating FIFO.

Lloyd Green was staff secretary to the George H.W. Bush campaign’s Middle East Policy Group in 1988 and served in the Department of Justice between 1990 and 1992.
ADVERTISEMENT