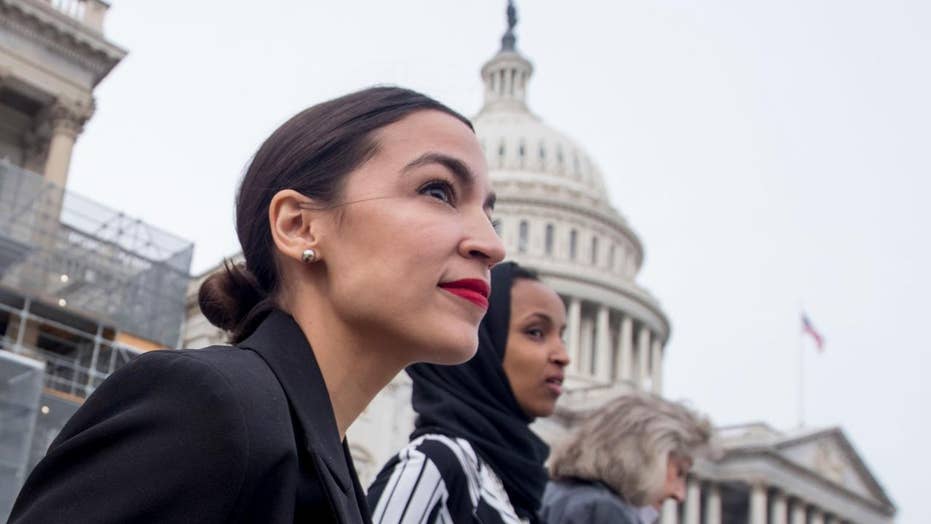 Rep. Alexandria Ocasio-Cortez, D-N.Y., is one of the rising stars of the new Democrat-led Congress and the left’s latest media darling. Millions were captivated by her surprising 2018 primary victory over long-time liberal House member Joseph Crowley, D-N.Y., and her achievement of becoming, at age 29, the youngest woman ever elected to Congress.

But make no mistake about it: Despite receiving widespread positive attention from many in the press, Ocasio-Cortez’s radical left-wing policy proposals and her socialist ideology present a significant threat to America’s economy and its longstanding commitment to individual liberty. Ocasio-Cortez doesn’t simply want to tweak our existing system, she wants to complete Barack Obama’s goal of “fundamentally transforming the United States of America.”

At the foundation of all of Ocasio-Cortez’s reforms is her commitment to socialism, an economic system that in its most utopian form aims to eliminate nearly all private property and puts the “collective”—which, in a democratic society, is simply the majority of voters—in charge of every aspect of life, including the education of your children, the extent of your rights to practice your religion, and your most important health care decisions.

Ocasio-Cortez is a member of the Democratic Socialists of America (DSA), the largest socialist organization in the United States. DSA doesn’t merely want to create new government-run social programs, it desires, in the words of a member of DSA and the editor of the socialist magazine Jacobin, to “in the long run … end capitalism.” On its website, DSA blames, in part, “the globalization of capital”  for “racism, sexism, homophobia, and environmental degradation.”

DSA remains a fringe political organization in most of the country, but it was an integral part of helping its most famous member, Ocasio-Cortez, get elected in New York.

Ocasio-Cortez’s commitment to enacting democratic socialism is evident in many of her policy proposals, especially her plan for a “Green New Deal.” According to a draft resolution produced by Ocasio-Cortez to create a House climate change committee, the Green New Deal would eliminate nearly all fossil fuels in the United States by 2030 and instead force consumers to buy 100 percent of their power from renewable energy sources like wind and solar, which cost as much as five times more than existing fossil-fuel-power generation, and to purchase electric cars.

Even more disturbing, Ocasio-Cortez’s Green New Deal includes “upgrading every residential and industrial building for state-of-the-art energy efficiency, comfort and safety,” a plan that would cost trillions of dollars and give government access to every household in America.

Ocasio-Cortez is a member of the Democratic Socialists of America (DSA), the largest socialist organization in the United States. DSA doesn’t merely want to create new government-run social programs, it desires, in the words of a member of DSA and the editor of the socialist magazine Jacobin, to “in the long run … end capitalism.” On its website, DSA blames, in part, “the globalization of capital”  for “racism, sexism, homophobia, and environmental degradation.”

Ocasio-Cortez’s commitment to socialism isn’t limited to energy and environment-related issues, either. She has also called for the passage of “Medicare for All,” legislation proposed by socialist Sen. Bernie Sanders, I-Vt., that would put the government in charge of the entire health care industry—at a cost of $32 trillion, according to estimates from the Mercatus Center. And she has proposed creating multiple other trillion-dollar government programs, like a federal jobs guarantee that would pay anyone who wants a government job “a living wage” and other “basic income programs,” which are designed to pay lower-income and non-working people money, even if they are able-bodied and could work.

Ocasio-Cortez backs creating a radical government-funded program that would make public colleges tuition-free and “cancel” the $1.5 trillion in outstanding student loan debt, and she pledged during her campaign to support strict gun-control measures and plans to make housing “a human right.”

How does Ocasio-Cortez plan to pay for these massive programs? In a “60 Minutes” interview with Anderson Cooper that will air on Sunday, Ocasio-Cortez suggested that some of her plans could be paid for by raising taxes on the wealthy to rates as high as 70 percent. But even that huge tax increase wouldn’t be nearly enough to pay for her numerous policy proposals, which is why Ocasio-Cortez has suggested the United States create a system of new publicly-owned banks that the government could use to run up the national debt. She has also called for printing money to pay for her socialist reforms.

Ocasio-Cortez wants to impose her radical, socialist vision on every single American citizen, a fact most of those in the mainstream media who have spent the past several months fawning over her refuse to tell the public. We must stand against these assaults on capitalism and our personal freedoms, or else the next generation of Americans won’t have access to the same liberties millions of our forefathers sacrificed for. For those of us who support free markets and personal liberty, losing this ideological battle is not an option.