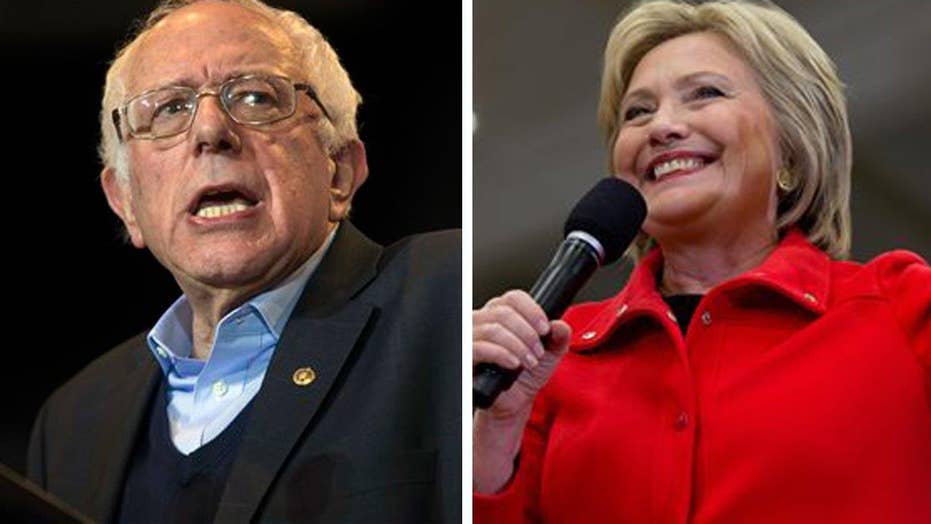 Will the Bernie Sanders effect 'Bern' Hillary in Iowa?

Enthusiasm on the ground appears to show Democratic millennials are 'feeling the Bern' and that could mean trouble for Hillary Clinton amid tight race in the Iowa caucuses. 'On the Record' takes a closer look

Watching last Thursday’s debate between Democratic presidential candidates Hillary Clinton and Sen. Bernie Sanders one might have thought a Republican had been in the White House for nearly eight years.

Hearing their complaints about the economy (bad), discrimination (rampant), health care (too many without it), unemployment (too many not working, or working at low-paying jobs), it appeared hope had died and change is all we have left in our pockets.

To hear these two ultra-liberals tell it, we are a horrible, miserable, evil nation. We are bigots, we are greedy because we won’t surrender more of our income to the government gods, we hate anyone who isn’t white, male and heterosexual, and we want to deport everyone who isn’t a Christian.

I wouldn’t want to live in a country like that, would you? But that is not who we are. It is only who Democrats think we are.

Hillary Clinton hasn’t yet released transcripts of speeches she gave to Wall Street bankers and hedge fund managers. When asked why not, she reverted to familiar Clinton obfuscation, promising to “look into it.” Want to bet they’re never released? Look how long and how many lawsuits it took to pry her emails from the State Department. And we still haven’t seen them all.

Laura Myers, of the Las Vegas Review-Journal, writes that, according to Clinton’s standard speaking contract, she “…won’t allow any press coverage or video- or audio-taping...” of her speeches, for which she charges six figures. McClatchyDC adds that the former secretary of state “routinely demanded that a stenographer be present at her events so she could maintain a record of what she said.” So we know the transcripts exist.

She didn’t ask for those big speaking fees, Clinton said. They just gave the money to her. Why would anyone expect those generous Wall Street brokers and hedge fund managers to ever ask for anything in return? How dare you!

During this and in previous Democratic debates, we heard nothing about what you can do to make your life better. It is all about government. Clinton and Sanders would never qualify for membership in the Optimist club. Theirs is a steady stream of gloom, doom and pessimism. America’s best days are behind us and they weren’t so good after all. Slavery, racism and denial of women’s rights … the list goes on.

In Bernie Sanders’ America no one will ever have to work again. College will be “free,” as will health care. The “rich” will pay for it all. Never mind that taking away their incentive to work and make a profit will reduce the amount of money they make and the government can take. Bernie will just borrow it from others and America will become like Greece. Socialism seems nothing more than mutually shared poverty. Adopt it, and we will all be equally poor.

At last Thursday’s National Prayer Breakfast, Mark Burnett, president of MGM Television and Digital Group, and his actress-wife and co-producer Roma Downey, told stories about immigrating to America — he from England and she from Northern Ireland. Burnett, fresh from service in the British Army, took a job as a chauffeur and part-time nanny in Los Angeles. Downey’s first job was checking coats at a fancy New York restaurant where she said she could not afford to eat.

Burnett can now see the house where he once worked from his office window in Beverly Hills. He and Downey are producing biblical and family-friendly television programs. They own a home in Malibu.

These are the kinds of success stories we used to tell and examples we used to urge Americans to follow. No matter one’s present circumstances, you could make it in America. Success stories aren’t in the Democratic playbook. For Democrats, the only way to improve your life is for you to rely on government led by Democrats. Those who make it on their own it seems are punished by higher taxes and more regulations.

“The sun will come out tomorrow,” sings an optimistic Annie in the Broadway musical. For Hillary and Bernie, it’s a “hard knock life” and it’s always Midnight in America.