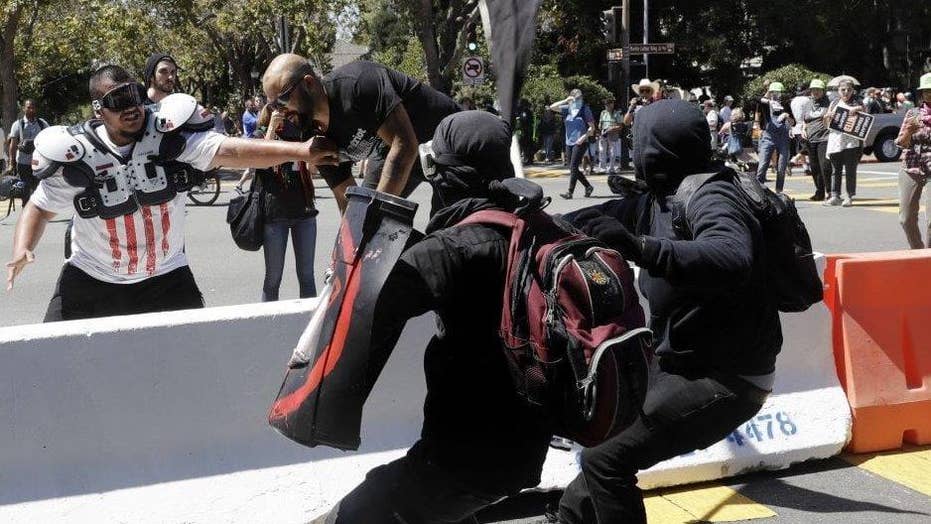 Should Antifa groups be barred from gathering?

Tucker takes on professor who supports Antifa groups' right to gather on campuses and other public spaces, despite fears of violent outbreaks #Tucker

It’s called “Antifa: The Anti-Fascist Handbook,” but it feels like false advertising. You open the little book expecting a how-to guide on violence and disruption. But instead of giving advice on how to shut people up with baseball bats, the handbook is really a rather dull lecture.

Ever since the election of Donald Trump, the American Antifa movement has gone into overdrive, shutting down speeches and rallies, and spreading mayhem across the U.S.

And now here comes author Mark Bray – a lecturer at Dartmouth College and an Occupy Wall Street organizer – attempting to give philosophical justification to a movement so certain of its righteousness that it’s not going to let a little thing like free speech get in the way.

Bray spends most of his time tracing the history of the movement, but finally gets to the heart of the matter, and the argument isn’t hard to follow. In essence: tolerance and reason don’t work, and you don’t wait for a small problem to get bigger, so let’s start beating heads.

Antifa gets to decide who the fascists are, and don’t look now, but it’s you.

There are obvious objections to this. And though Bray struggles mightily to overcome them, he’s simply not up to it. Of course, no one is.

But as a result of this close-minded thinking, we’ve got a violent movement convinced it has the right to be judge, jury and executioner because it has identified a deserving enemy.

Now even if this worked in theory, we already know it doesn’t work in practice. Because the guardians of goodness who fill Antifa’s ranks don’t just shout down neo-Nazis and other racists who deserve total condemnation (but not the loss of their constitutional rights). They also disrupt and commit violence at mainstream Republicans rallies, and attack anyone they’ve deemed unacceptable.

In other words, Antifa gets to decide who the fascists are, and don’t look now, but it’s you.

Mind you, Bray does attempt to explain what fascism looks like. Its hallmarks include a preoccupation with victimhood, a cult of purity, abandonment of liberty and redemptive violence.

I know, you’re ahead of me – that sounds like the Antifa movement. But they can’t be fascist because ... Bray says they can’t. Fascists can only be the people who don’t share the left’s views on race, gender and immigration (their views at present, that is – not necessarily what they believed a generation or two ago).

Now don’t get me wrong. Ideas have consequences. Indeed, the biggest irony in this unintentionally ironic book is that while Bray wants to save the world, the revolutionary socialism he calls for would actually impoverish and enslave everyone. And I don’t consider that conjecture – it’s the verdict of history.

But the point is not whether I’m right or wrong (because I am right, after all), but whether or not I should adopt the logic and tactics of Bray. If I did, he wouldn’t be allowed to express his ideas. He couldn’t publish books, gives speeches, and perhaps not hold a job or even walk in public unmolested. And to Bray, that should be business as usual – as long as he gets to schedule the beatings.

The value of “The Anti-Fascist Handbook” is that it strips bare the radical roots of the Antifa movement. It is in strict opposition to a liberal society, and Bray isn’t afraid to say it out loud, and at length.

It’s good to see that lately some Democrats (perhaps after glancing at the polls) have denounced the Antifa movement. The only mystery is, why haven’t they all?