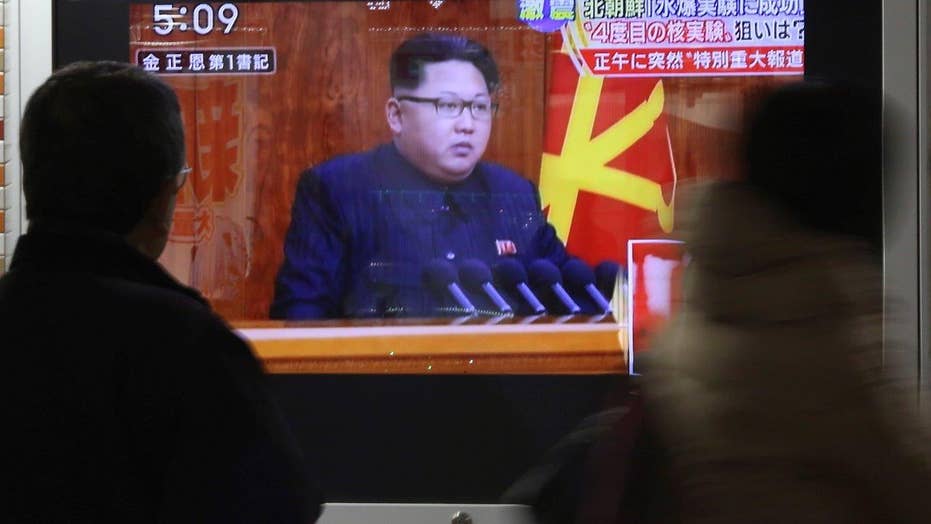 In claiming to have tested a small hydrogen bomb, North Korean dictator Kim Jong Un has given President Obama cause for frustration and tears, but few options likely to counter an enhanced threat from the hermit kingdom.

North Korea’s announcement Wednesday coincided with a suspicious 5.1 magnitude quake near the underground site where North Korea has previously conducted three nuclear tests in 2006, 2009, and 2013, says Melissa Hanham, a senior research associate at the Center for Nonproliferation Studies. While many experts doubt that North Korea’s claims are accurate, the development, if true, would represent a major advancement of the belligerent regime’s nuclear capabilities. A hydrogen bomb, nuclear expert Joseph Cirincione agrees, is 1,000 times more powerful than the kind of atomic weapon that the U.S. used on Hiroshima and Nagasaki during World War II. But even if the blast is smaller than Pyongyang claims, North Korea’s nuclear program is steadily advancing with an estimated arsenal of 10 to 16 atomic weapons, which could total 20 by year’s end.

The test, predictably, has been widely condemned. The United Nations Security Council convened an emergency meeting. Equally predictably, Republican and Democratic officials began blaming one another for North Korea’s provocation, with Republicans noting that three of Pyongyang’s four nuclear tests have occurred on Mr. Obama’s watch.

History suggests however, that neither political party has been able to contain North Korea’s nuclear ambitions, much less end its brutal repression of its 25 million people.

Having stood on the Demilitarized Zone demarcation line last November and interviewed western and South Korean officials about how best to deal with the despotic regime and its dangerous young leader, who turns 33 on January 8, I have concluded that there are few good options for responding to North Korea. The traditional carrot and stick diplomacy used to try to change a regime’s conduct is unlikely to work on Kim Jong Un.

President Obama’s policy of ignoring North Korea -- “strategic patience,” as it is known -- has clearly failed. But its critics remain divided about what the next administration should do to stop North Korea’s nuclear program.

There is no shortage of policy prescriptions. Here are some of them:

-- Increasing sanctions. While some argue that sanctions have not changed North Korea’s behavior and that further sanctions may be pointless, Victor D. Cha, the former director of Asian affairs at President George W. Bush’s NSC, says that the sanctions imposed on North Korea have been but a fraction of those imposed on Iran. Other proponents of tougher sanctions note that the one time Washington got Pyongyang’s attention was when it cut off the ruling family’s bank accounts in Macau which financed the elite’s lavish lifestyle. Though the Bush administration lifted those sanctions, many now call for their revival and strengthening.

-- Sanctions plus renewed engagement. Writing for the Arms Control Daryl G. Kimball and Kelsey Davenport argue that while Washington should strengthen and tighten enforcement of existing U.N. Security Council sanctions against North Korean entities that deal with its nuclear and missile programs, North Korea will not scale back its programs absent the prospect of “renewed and effective diplomatic engagement.” Greg Thielman, also of the ACA, urges the White House to pursue talks aimed at a more modest goal of freezing North Korea’s program rather than “seeking (and failing) to achieve another unreliable pledge to denuclearize the country.” But so far, critics reply, Kim Jung Un has shown little interest in negotiating away its nuclear arsenal, which it sees as its survival insurance policy.

-- Reinforce the global taboo against nuclear testing. Andrew Weber, a former non-proliferation adviser to President Obama’s Pentagon, urges the U.S. and other major states to reinforce the global taboo against nuclear testing by pressuring hold-out nations to sign or ratify the 1996 Comprehensive Test Ban Treaty banning such testing. Only India Pakistan, and North Korea have not signed the treaty, he notes. And while China, Egypt, Iran, Israel and the U.S. have signed, none has yet voted to ratify the accord. “This latest test doesn't change the status quo all that much,” he said. “So it’s important not to panic.”  Though strengthening and expanding the CTBT would further isolate North Korea, many critics of this idea say Pyongyang is unlikely to abandon testing simply because other states reinforce their commitment to do so.

-- The China card. While even presidential hopefuls Rand Paul and Hillary Clinton agree that pressure from China, which supplies North Korea with most of its heavy fuel and food, is key to curtailing Pyongyang’s nuclear efforts, Beijing has been unwilling to apply it. “China is no friend of North Korea’s at this point,” says Hanham. “But although this is the worst point ever in their relationship, the only thing worse for China than a nuclear North Korea is a collapsed North Korea.” The last thing China wants is American and South Korean forces on its border.

-- A stronger national security policy. Robert Joseph, President Bush’s senior adviser on proliferation, says that North Korea will be deterred only if Washington pursues a national security policy based on “principle and strength instead of appeasement and weakness,” pointing to the Iran nuclear agreement as an example. He urges the next administration to reinvigorate such counterproliferation programs as the Proliferation Security Initiative, agreements among states to board and seize ships carrying illicit nuclear-related goods and equipment, and the Global Initiative to Combat Nuclear Terrorism, both Bush initiatives. He and several others also support a controversial program to protect America with a missile shield, a concept advocated by President Reagan which arms control advocates call technically infeasible, or programs that would provide what Hanham calls a “false sense of security.” But shield advocates complain that President Obama has scaled back funding for missile defense research from some $9 to $7 billion a year. As Mr. Joseph argues, “4 of every 5 dollars now go to theater defenses, not to protecting the American homeland.”

-- A North Korea without the Kim dynasty. Jack David, a senior fellow at the Hudson Institute who was President Bush’s deputy assistant secretary of defense for combating weapons of mass destruction, goes further. “By clinging to the hope that Pyongyang can be induced to give up its ambitions for nuclear weapons and long-range missiles, officials are distracted from pursuing policies that might actually enable the people of North Korea to end the Kim dynasty.” America’s goal, he argues, should be regime change, “not to extract the next promise that Pyongyang can renege on.” He urges the next administration to “deny North Korean actors access to international financial institutions, and support the efforts of refugees (in South Korea and elsewhere) to pass information about the Free World to friends and family in North Korea.”

The Wall Street Journal has endorsed stronger sanctions and strengthening missile defenses in Asia, but concludes that “regime change” is the only way to end North Korea’s nuclear threat. But with China as Pyongyang’s protector, that is an admirable goal without a strategy for achieving it. The New York Times has urged renewed diplomatic engagement aimed at scaling back North Korea’s program, rather than ending it. But Kim Jong Un has shown little interest in talks aimed at doing either. For its part, South Korea announced Thursday that it would resume its cross-border broadcasts of the anti-Korean propaganda and rock music that have so infuriated Pyongyang.

That may be the most practical route of all. If there is no obvious way to stop North Korea’s nuclear program – and there isn’t -- we can at least drive them nuts with K-pop.

Author's note: I visited South Korea in November as part of a journalists' exchange program sponsored by Arirang TV.