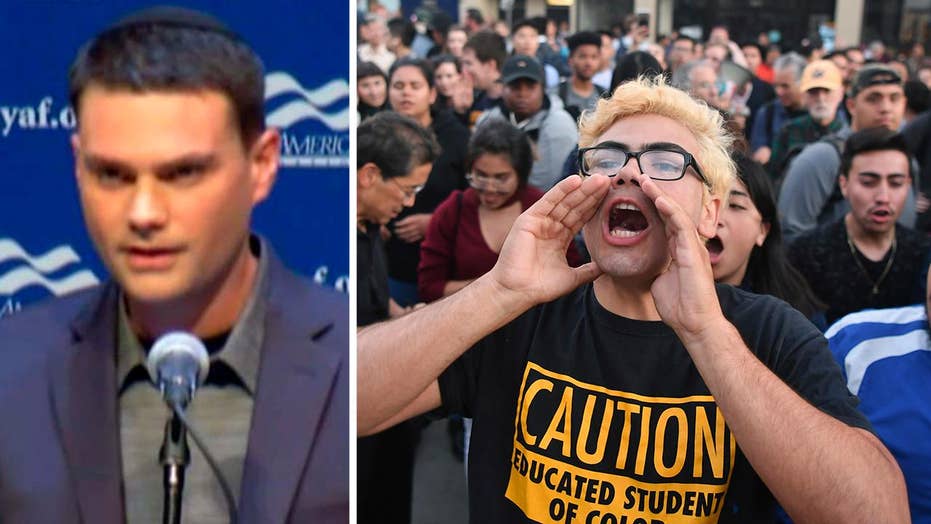 Recently, I spoke to a group of College Republicans at the University of Dayton. Their curiosity, eagerness to learn and intelligence impressed me. They asked hard questions and shared some remarkable insights of their own. One concern about what was going on at campuses around the country was Ohio State’s recent, unexplained decision to stifle students speech by banning them from decorating their dorm windows with messages made out of Stickynotes, a longstanding and beloved tradition. Another student at Auburn University was ordered to remove a Ron Paul sign, but no signs from other candidates received the same treatment.

Sadly, their concern is not without cause. College is supposed to be a unique time and place where students get to learn about themselves and others and develop the critical thinking skills necessary to participate in our constitutional republic. Increasingly, however, this opportunity is coming under attack. The only way this process of growth and self-discovery can work is if you’re exposed to new ideas and can engage with them thoughtfully and rationally. And the only way you can encounter new ideas is if both you and others have freedom of speech – the right to say what you think without fear of legal repercussions or physical threat.

The First Amendment defends this right, or at least it was supposed to, but more and more we’re seeing universities ignore this basic human freedom in favor of their own restrictive policies and procedures. Safe spaces, free speech zones and speech codes – all of these ultimately undermine what a university is really about in the first place.

These young people have the potential to think, lead and, one day, govern well. We do them – and our country – no favors by shielding them from uncomfortable ideas.

Additionally, many of these policies and practices unfairly target conservative speakers and groups. After its much-publicized decision to rescind Ann Coulter’s invitation to speak, Berkeley has once again shown itself unwelcoming to anyone with provocative opinions. Allegedly for “security reasons,” the university cut the number of available seats at a Ben Shapiro lecture by nearly a thousand. They even offered counseling services to students who felt “threatened” by his ideas. Ridiculous!

It’s a crying shame – Shapiro is a sharp, nuanced voice for constitutional conservatism, and just the kind of thinker students need to challenge them – but it’s not exactly surprising. This action is just one in a long line of actions taken by universities to stop free speech and stifle conservative voices. From the walk-outs at Betsy DeVos’ commencement speech at Bethune-Cookman, to protests at Claremont McKenna blocking Heather MacDonald’s speech, to the vicious attempted attacks on Charles Murray at Middlebury, a sinister trend is growing, one in which the challenges conservative speakers pose to liberal orthodoxy are vehemently – and sometimes violently – suppressed.

But it’s not just on campus that we’re seeing this trend. Free speech is under attack in our political system as well. Since the IRS’ targeting of conservative nonprofits in 2012, attempts to limit our right to free speech and systematically enforce political correctness have only grown. We see it now in the current push to tear down Confederate monuments and rename schools and roads named for Confederate generals. Soon enough, we may see it in an attempt to block the rights of alt-right groups to assemble.

Let me be clear – the alt-night, Nazism and racism are reprehensible, repugnant ideas that go against everything we value as Americans. I’ve been battling their kind in the war of ideas for years. But attacking the rights of groups like this to speak and to assemble only causes them to go underground and emerge years later in more extreme forms. And as soon as you take away the rights of one group to assemble, you pave the way for the removal of the rights of other, far more moderate groups further down the road. Provided that no harm is done to persons or property, everyone – from the alt-right to the far left – has the same constitutionally guaranteed rights.

So – what is the solution? How do we preserve this, our first and most precious of liberties? At the end of the day, it comes down to us, the people. Are we willing to take the risk of sharing our controversial opinions? Are we willing to challenge the status quo – whether on social media, in the classroom, or on the Congress floor? We have these liberties – are we willing to use them? Pundits and media groups make fortunes and are therefore incentivized financially to air their opinions, but they can afford the security to defend themselves legally, and personally. But the chilling effect on college students who can’t afford the same defense must not be ignored.

Millennials are a much-maligned generation, frequently blasted for their inability to think, work or act for themselves. But what I saw at Dayton showed me otherwise. These young people have the potential to think, lead and, one day, govern well. We do them – and our country – no favors by shielding them from uncomfortable ideas. The university and democracy both are built on the idea that human beings find the best solutions when they are challenged, not when they are comfortable or complacent. If we want both institutions to flourish, we must have the courage to let them be free.

Austin Petersen is a candidate for the United States Senate in the state of Missouri. Learn more at austinpetersen.com.