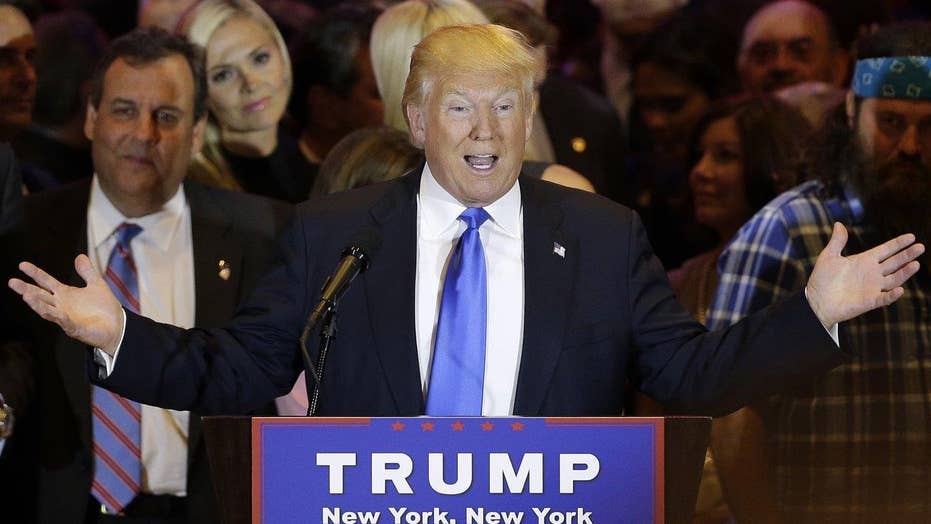 Responding to the need to re-evaluate American foreign policy which has been adrift since the end of the Cold War twenty seven years ago, Mr. Trump has presented a plan to reassess current U.S. security arrangements around the world with the necessary goal of adapting to new developments and addressing emerging threats.

Mr. Trump makes the case that American taxpayers are spending titanic amounts defending other nations and regions which could and should be contributing more toward their own self-defense. The principle of defending friends is not in question, but our spending strategies have to be reevaluated, so that long term viability is insured. Within NATO, only four of the 28 member countries are meeting their defense commitments while the US is providing 73 percent of the overall NATO budget.

This organization should be restructured to be able to adapt to current world challenges, including countering the terror threats now crawling up from NATO’s south and southeast and striking its cities, as well as to stand by its weaker members if they face pressures. Mr. Trump clearly desires to reduce tensions with Russia and China so as to better focus on containing our common enemy, Jihadism.

For Mr. Trump, the worst case scenario of nuclear terror is the first priority to be addressed before such weapons fall into the hands of jihadi terrorists who are more than willing to use them. President Trump will never allow Iran to obtain a nuclear weapon, and he will confront and contain Iranian expansionism.

The Obama administration has stood by helplessly as the Middle East has become increasingly engulfed in chaos. Syria, Iraq, Libya and Yemen are crumbling under civil wars, Hezbollah dominates Lebanon and Iran is using the unfrozen billions released by Obama’s deal to purchase advanced weaponry and to destabilize the region even further. A new U.S. policy will reverse these processes as of February 2017. Although Mr. Trump would take steps to create safe zones in the region to stem the tide of refugees now pouring into Europe, he has declared that America will get out of the nation-building business and that American citizens will never again feel their interests come second to the interests of the citizens of foreign country.

While the world is concentrating on ISIS in the Levant, dozens of terrorist Jihadi enclaves are being formed by radical Islamists stretching from Afghanistan, the Sinai to Libya and progressing across Africa. They must be contained with the help of regional coalitions. Mr. Trump also understands the use of economic leverage to pressure China into reining in North Korea’s nuclear ambitions.

From Paris to Brussels, from Chattanooga to San Bernardino, the urban jihadists are wreaking havoc. Stronger counter-terrorism measures and deeper international cooperation on the one hand, and new and smarter immigration strategies on the other, must be set up in order to place America on a path to greater security, not just for today, but for generations to come.

Under President Donald Trump, iihadism and Islamism will be called by their names, inasmuch as they already are in Europe and the Arab world, and with greater precision. Identifying, designating, and countering the jihadi ideology will be the central core to U.S. strategic communications in order to protect America and its allies.

Furthermore, the mother organization which has been spreading extremism and stealth indoctrination since the 1920’s, i.e. the Muslim Brotherhood, will be designated as a terrorist group by President Trump in coordination with the U.S. Congress and in conjunction with a growing number of Arab countries who have already framed it as such.

Mr. Trump will bring every possible instrument of power and intelligence to bear so as to eradicate this terror scourge from the earth. But to achieve this goal, the American public must be informed and educated not dis-informed and dis-educated. A Trump administration will lead the effort to address these terror threats and will reform the engagement and strategic communication agencies of the U.S. government in such a way that this message is clearly understood by friend and foe alike and is reflective of the new national consensus between the White House and the Congress.

A new popular majority is sweeping the country during these primary elections and another greater national current will legitimize these new principles with the election of Donald Trump as president in November. These new foreign policy directions will have a deeply informed public backing them, so that President Trump can muster the energies of the American people to create a sustainable defense, encompassing clear objectives coupled with a strong international presence.

Now more than ever, confident American leadership is vital for a world in disarray.