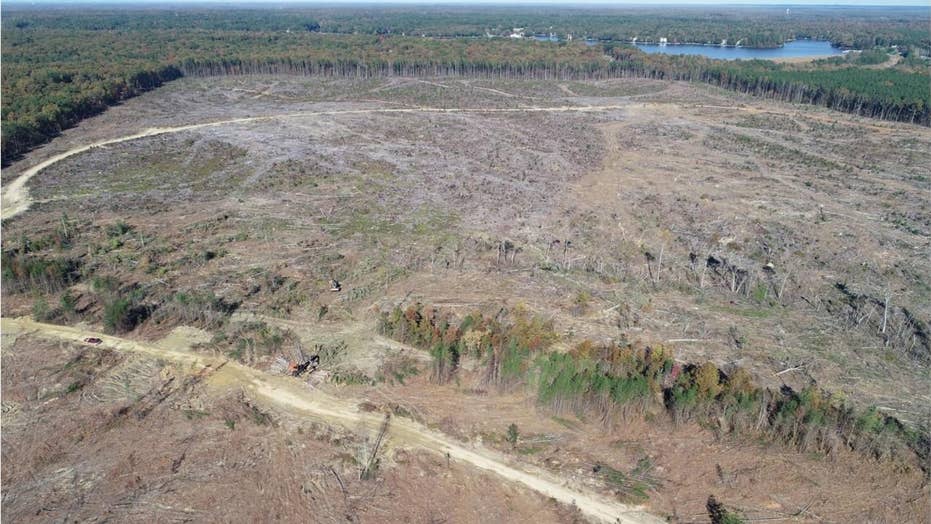 Renewable energy company sPower is trying to build the biggest solar project on the East Coast, a 500-megawatt solar farm on 6,000 acres in Virginia, but neighbors are voicing their concerns.

The state of Virginia is pushing to enact its own Green New Deal which, if it goes forward, would not only be the largest solar energy project on the east coast, but one of the largest in the world.

If the energy company sPower has its way it will take over 6,350 acres in Spotsylvania County for a massive 500-Megawatt solar project which will use 1.8 million solar panels on 3,500 of the acres.

What makes this solar project stand out from its large rivals west of the Rocky Mountains – and has opponents in the Virginia town of Spotsylvania seeing red instead of green – is its location.

DAVID WEBB: THE GREEN NEW DEAL IS NO JOKE - REPUBLICANS MUST PAY ATTENTION BECAUSE LEFTISTS HAVE A GOAL

While these large solar energy projects on the west coast are in sparsely inhabited remote locations, the site for this project disturbs well-populated Spotsylvania County, which is steeped in American history dating back to the Civil War and is the home to several historic battle sites.

Now the state of Virginia wants it to be home to a solar project almost half the size of Manhattan. Imagine a solar plant half the size of an area that houses 1.6 million people, dumped in the middle of a rural Virginia town. It’s not easy being green, I suppose.

Opponents of the project have a litany of concerns, among them how it threatens to overtake and overwhelm their community. Unlike similar projects west of the Rockies, Spotsylvania is not a remote location in the middle of many square miles of empty desert.

It’s not an exaggeration to say this solar project is virtually in residents’ backyards with reports that it could be as close as 50 feet away from their homes. To give you some perspective, 50 feet is just under the size of a bowling lane.

Imagine opening your door and rolling a bowling ball and hitting a solar plant. Welcome to cosmic bowling in the era of Rep. Alexandria Ocasio-Cortez’s, D—N.Y. fictitious green America.

There are plenty of remote locations on the east coast for a facility such as this if they bother to look. There’s absolutely no need for the strong arm of government to impose this on people who have no interest in having a solar plant half the size of Manhattan dropped in their backyard.

Unlike similar projects west of the Rockies, Spotsylvania is not a remote location in the middle of many square miles of empty desert.

A group of Spotsylvania residents have united and formed the group “Concerned Citizens of Spotsylvania,” Among their concerns is the potential for the rising cost of electricity, as well as environmental issues including toxic materials, water usage, erosion, increased likelihood of fires, not to mention all the trees that have already been removed to prepare for the project that has yet to get the final green light from the county’s Board of Supervisors.

According to residents who oppose the plan, sPower has been unmoved by environmental concerns in its insistence to use this site for its solar power plant.

Residents point out that in the county’s Comprehensive Plan land use map the site comprises roughly 25 percent of its forestal land. Close to 2,000 acres of land out of the 6,350 can’t be covered with solar panels due to the presence of streams and wetlands.

Also residents note that the Virginia Department of Environmental Quality has designated streams that flow through the site as “environmentally significant,” and “threatened and endangered species waters.” Additionally they point out the site is a significant part of what makes up the endangered Po River.

Unfortunately, facts are often of little consequence. As is the case with the plowing ahead — literally  — on 6,350 acres with a Virginia-sized Green New Deal.

So it’s official: Big Government liberals have made “green” into a one-word oxymoron. Any claim by these green dealers feigning concern about the environment is bogus. Their bluff has been called.

This is the Democrats’ new favorite fairytale, the Green New Deal which should be re-titled “Government Need for Domination.” Possibly never before have we seen Democrats be so shockingly forthcoming about their insatiable and disturbing need for control.

While Ocasio-Cortez and her counterparts are pushing the Green New Deal and their fairytale of rainbows and unicorns, Spotsylvania is Exhibit-A for how the impact of forcing this on communities is real.

Whether it’s Washington or Richmond dictating and overreaching with the supersized hand of Uncle Sam, the results are the same. The consequences on communities are critical, they result in hardship and adversity.

The future of this solar project hangs in limbo. Spotsylvania County’s Board of Supervisors will vote on whether to move forward with it at the end of the month. The Board needs to send a message to both Richmond and Washington — No deal! Rural America isn’t going to be the guinea pig for this vision of a Green New Deal the Democrats have dancing in their heads.