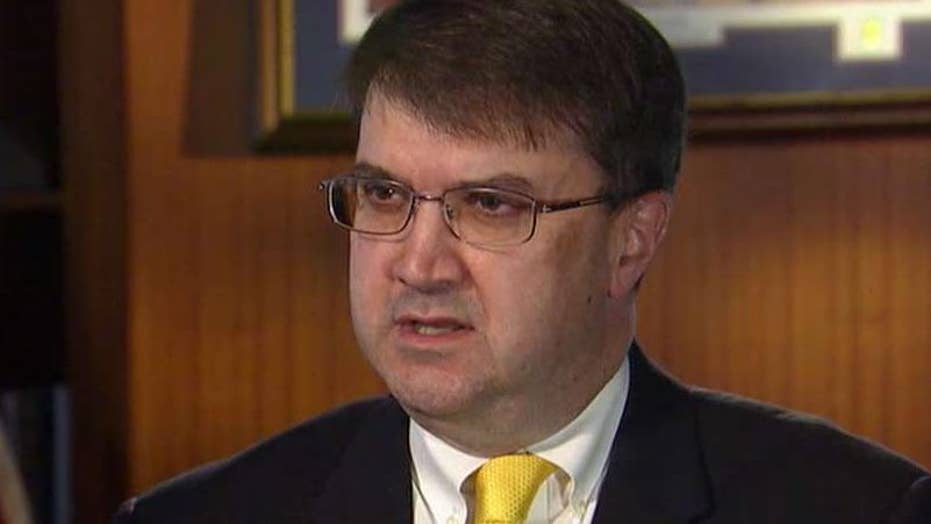 Under President Trump, VA has done more in the last two years than it has in decades in reforming the department and improving care and benefits for our nation’s heroes.

The VA has made groundbreaking progress, particularly in the areas of accountability, transparency and efficiency across the department while achieving an unprecedented series of legislative successes, including giving greater choice in care to our nation’s veterans through the MISSION Act.

As part of these efforts, the department is making great strides in our top clinical priority -- suicide prevention -- and in improving mental health care for veterans, including through Telehealth, and same-day mental health services.

MORE ON THIS TOPIC: VETERAN ON MISSION TO COMBAT SUICIDE IN MILITARY COMMUNITY

In his first year in office, President Trump issued an executive order to support veterans during their transition from uniformed service to civilian life. The order focuses on transitioning service members and veterans in the first 12 months after separation from service, a critical period marked by a high risk for suicide.

We’ve also taken a number of other important steps to reach veterans at risk.  Since becoming VA’s director of suicide prevention, Dr. Keita Franklin has added more than 20 staff to her team, worked to improve the office’s organizational structure and brought clear lines of responsibility and accountability to VA’s suicide prevention efforts.

We’ve also made great use of unpaid media through our partnership with Johnson & Johnson to produce a public service announcement featuring Tom Hanks—at no cost to VA. That partnership helped put VA in the top 10 of the Nielsen ratings for PSAs.

More and more Americans are taking advantage of VA’s suicide prevention resources. The Veterans Crisis Line helps about 2,000 callers every day. In the past 10 years, it has answered over 3.5 million calls, engaged in over 413,000 online chats, and responded to over 98,000 text messages. And our suicide prevention coordinators conducted over 22,000 outreach events last year, reaching 2.2 million Veterans and family members.

Also, a recent pilot study found that a Safety Planning Intervention program currently in use at five VA facilities has shown to reduce suicidal behavior by 45 percent, and this intervention will be expanded to all VA facilities nationwide.

Tragically, an average of 20 veterans die by suicide each day. Of those 20, 14 have not received recent VA care. The goal of VA’s suicide prevention efforts is not to get every veteran enrolled in VA care, but rather to equip communities to help veterans get the right care, whenever and wherever they need it.

This means using prevention approaches that cut across all sectors in which veterans may interact, and collaborating with veterans service 0rganizations, state and local leaders, medical professionals, criminal justice officials, private employers and many other stakeholders.  We’re doing this through the Mayor’s Challenge in which we work with cities to develop community plans to end veteran suicide, and we’re expanding that program to work with governors on the same approach in their states in February.

Put simply, suicide prevention is much more than intervention at the point of crisis – it is about creating and fostering cultures where veterans and their families thrive. We’re all in this together. We must approach this matter compassionately and clinically and build on the important lessons from the past, while expanding our efforts in new directions that make sense.

If any veteran is in crisis, we encourage him or her to visit the closest VA facility, as all VA health care locations provide same-day urgent mental health care services, or call the veterans crisis line at 1-800-273-8255.

Robert Wilkie is the Secretary of the U.S. Department of Veterans Affairs