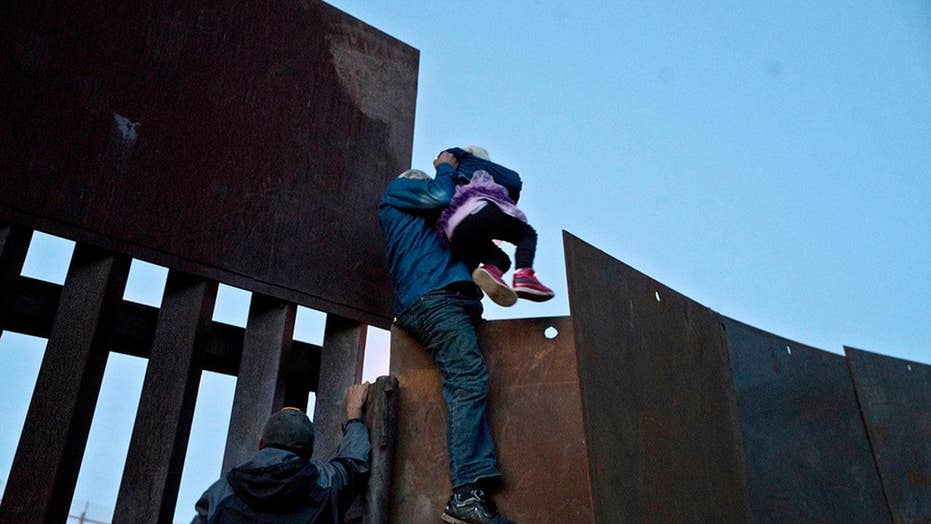 Is there a national emergency at the border? Reaction and analysis from former deputy assistant attorney general John Yoo and Arizona Sheriff Mark Lamb.

It’s clearer than ever that President Trump was justified in declaring a national emergency on America’s border with Mexico. The $8.6 billion he requested Monday in his new budget proposal for border barriers would help deal with the crisis, but additional actions are needed.

This should not be a partisan issue, although Democrats have turned it into one. We all have an interest in a secure southern border, and our government has a right and responsibility to determine who can and can’t enter the U.S.

It’s true the most illegal immigrants coming to the U.S. are looking for jobs and a better life – not to do harm. But it’s also true that a porous border allows terrorists, other criminals and illegal drugs to enter the United States.

An important step the Trump administration should take would be to work more closely with Mexico and its southern neighbor Guatemala to reduce the flow of migrants entering the U.S. illegally. This should involve partnering with the two nations on improved border security, law enforcement, economic reforms and job creation projects.

These actions would incentivize more people stay in those countries – living in safety and economic security – in addition to making it harder to enter the U.S. illegally.

The lawless Guatemala-Mexico border is a particular problem, serving as a wide-open backdoor to Mexico. And many of the illegal immigrants entering Mexico from Guatemala don’t intend to stay there – their real destination is the U.S.

President Trump could help himself and the United States if he were to focus on Guatemala now. He needs to end harmful policies created under President Obama’s administration, name a political appointee as ambassador and work with Guatemalan President Jimmy Morales to improve living and economic conditions there and bring law and order to the border with Mexico.

If President Trump takes these actions, grateful rural populations in Guatemala would gain opportunity as a result of increased business activity and security. They would have less reason to migrate and would cooperate with security forces to identify suspicious activity. The result would be a reduction in the flow of illegal immigrants, drugs and other contraband into the United States.

As President Trump has stated with his declaration of a national emergency on the U.S.-Mexico border, the problem of illegal immigration is growing worse.

“This is an 80 percent increase over the same time last year,” Nielsen testified. And she predicted the number of illegal immigrants would grow higher in the spring, estimating that Customs and Border Protection expects to apprehend almost 1 million illegal immigrants on America’s southern border this year.

“We face a crisis – a real, serious, and sustained crisis at our borders,” Nielsen said. “We have tens of thousands of illegal aliens arriving at our doorstep every month. We have drugs, criminals, and violence spilling into our country every week.”

Knocking down a claim of Democrats, Nielsen said: “This is not a ‘manufactured’ crisis. This is truly a national emergency.”

It’s no surprise that the largest group of illegal immigrants now in the U.S. comes from Mexico – an estimated 6.2 million people. In addition to being our closest neighbor, Mexico has a population of nearly 134 million.

But many Americans are surprised to learn that the second-largest group of illegal immigrants comes from tiny Guatemala, which has a population of just under 18 million. An estimated 723,000 illegal immigrants in the United States today came from Guatemala.

Another roughly 465,000 illegal immigrants in the U.S. are from El Salvador and some 337,000 are from Honduras, Guatemala’s southern neighbors.

As an American living in Guatemala for almost a half century, it is maddening for me to watch the chaos in Guatemala driving so many people to leave the country and the damage it is causing in the U.S.

The vast majority of illegal migrants and smugglers coming to the U.S. from south of the Mexican border pass through Guatemala's 541-mile porous border with Mexico. The only other nation on Mexico’s southern border is Belize, sharing a 155-mile border.

The causes of so much migration from Central America begin with centuries of centralization and abuse of power and, more recently, the role of Cuba’s communist dictator Fidel Castro in exacerbating those conditions. In the early 1970s, Castro created Cuba’s America Department to initiate Marxist-Leninist violence throughout Latin America.

Unfortunately, President Obama changed the Cuba policy of his 10 most recent predecessors. His State Department embraced the successors to Castro-supported subversives throughout Latin America.

Obama imposed guerrilla-successor allies in key Guatemalan government positions. They protect illegal armed gangs that force rural populations to participate in their criminal activities, including destroying businesses, invading private property, and denying police access to their areas. Those officials persecute anyone who attempts to apply the law to the protected groups.

To be effective, the Obama policy required a socialist takeover of Guatemala's criminal justice system and judiciary. In 2016 the U.S. ambassador openly involved the embassy in pressuring Guatemala’s Congress to appoint a socialist ally to the nation’s highest court.

Former Vice President Joe Biden – who may seek the Democratic presidential nomination in 2020 – traveled to Guatemala three times in 12 months during the Obama presidency to pressure the government to extend a U.N. commission that was an important co-conspirator in the socialist takeover. That agency is called the United Nations’ International Commission against Impunity in Guatemala, known by its Spanish initials as CICIG

Despite Obama embassy support for Sandra Torres – a former guerrilla and vice president of Socialist International – of the UNE party, she lost the election for the Guatemalan presidency to political novice Morales in 2015.

Since President Trump took office in 2017, State Department globalists have made a great effort to keep him from working with Morales. They know Morales, who is not a leftist, is someone Trump can work with.

Like President Trump, President Morales is a supporter of liberty and free markets and is staunch opponent of socialism and communism.

And Morales stood up in January when he expelled the CICIG from his country as an infringement on the Guatemala’s sovereignty.

As with Trump, left-wing opponents have unsuccessfully tried to remove Morales from power. They brought phony charges via the CICIG with support from Democrats in the U.S. Congress.

What’s needed now is closer cooperation between the Trump and Morales administrations along with a wall on the U.S. Mexico border and other immigration reform measures President Trump has called for.

Together, these steps can go a long way to bringing about a major reduction in illegal immigration and drugs entering the U.S.