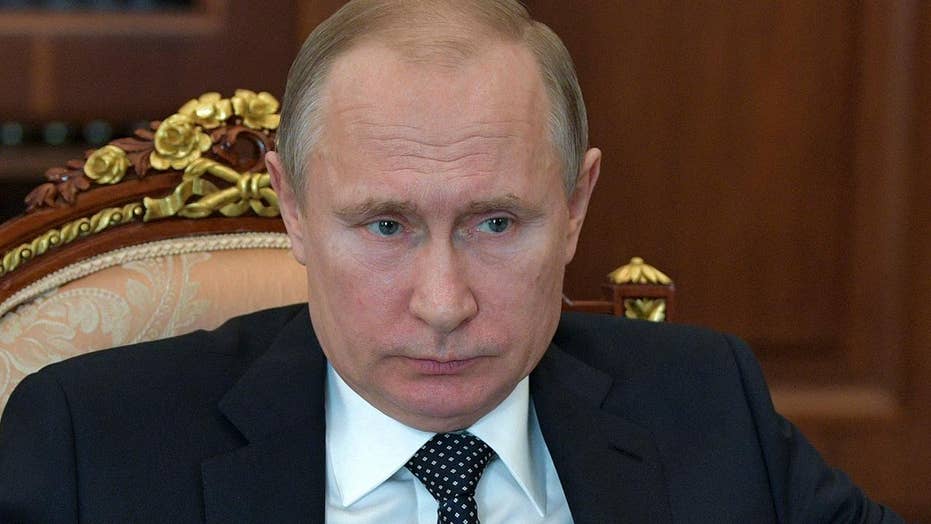 US set to hit Russia with new sanctions

President Trump is set to place new sanctions on Putin for his continued support of Assad after U.S. airstrikes; national security correspondent Jennifer Griffin reports from the Pentagon.

The media and Democratic politicians are painting President Trump and his administration as lapdogs for Russian President Vladimir Putin. In fact, nothing could be further from the truth.

Such fact-free assertions are nothing more than partisan political attacks. When comparing President Trump’s actions against Russia to those of President Obama, it is immediately clear that Trump has taken a more responsible approach.

President Trump is the Russia hawk, not President Obama. Calling the current president “soft” on Russia is both dishonest and unscrupulous.

Attacks by Democrats on President Trump’s Russia policy are an attempt to hide the fact that the current administration has been much tougher on Russia than that of President Obama. The reason for these attacks is to deflect from President Obama’s foreign policy failings, and to preserve the rapidly collapsing “Russian collusion” narrative.

Democrats seem to have erased the former president’s legacy on Russia from their memories, such as the time during the presidential debates when Mitt Romney called Russia “America’s number one geopolitical foe.”

President Obama’s response was both mocking and dismissive as he said: “The 1980s are now calling to ask for their foreign policy back, because the Cold War’s been over for 20 years.”

Putin is not the evil maniacal ruler that some make him out to be. Like any savvy autocrat, he’s an opportunist who seeks to advance his agenda wherever and whenever possible. Thanks to President Obama’s hands-off mantra, Putin was given a unique opportunity to exploit America’s retreat in key spheres of influence.

Nowhere is this better illustrated than President Obama’s inaction during the Russian annexation of Crimea, seizing it from Ukraine. Likely feeling emboldened by American passivity in Syria, Putin decided to up the ante in his quest to make Russia once again a global powerhouse.

After watching as his Ukrainian ally Viktor Yanukovych was ousted as leader of that nation, Putin decided to go all in on Crimea. “Little green men” flooded across the Russian border into sovereign Ukraine – effectively controlling the region by March 2014.

The United States and its European allies – still playing by the old rulebook and not expecting territorial annexation to happen in 21st century Europe – reacted only weakly.

President Obama imposed minor sanctions, which did little more than bruise Russian defense firms and banks. What he did not do is more notable: he refused to provide lethal aid to Ukraine, despite repeated requests from the embattled government.

Ukraine wouldn’t be the end of Russia’s ongoing adventurism. Seeking to build upon its existing sphere of influence in the Middle East, Putin decided to dramatically increase Russia’s presence in the Syrian civil war.

After failing to enforce his own “red line,” Obama called upon Moscow to broker an agreement with Damascus to remove chemical weapons from the conflict. Putin was more than happy to negotiate an “agreement” that let Assad maintain his stockpiles of chemical weapons, which are still utilized, brutally and cruelly, to this day.

Obama passively watched as Putin worked with Assad to commit atrocities against the Syrian people. Munitions, arms, and soldiers steadily flowed from Moscow to the Assad regime with no scrutiny. Putin’s forces helped conduct countless airstrikes on civilian areas.

Thanks to the Obama administration’s naivete and foolish trust in Putin, Russia received a free pass for its complicity and barbarism.

In contrast to the Obama administration’s misguided and soft approach, President Trump has been tough on Russia. He reversed the previous administration’s decision to not send weapons to support the Ukrainian government.

Russia has continued to incite an armed uprising in Ukraine’s Donbass region – hoping to potentially annex that region as well. But thanks to the Trump administration, much-needed weapons, including Javelin missiles, have been sent to Ukraine to help quell the Russian-backed rebellion.

The president has taken the gloves off against Putin and his puppet, Syrian dictator Bashar Assad. Unlike Obama, Trump backed up American “tough talk” when Assad used chemical weapons against his own people in the Syrian city of Khan Shaykhun last year.

U.S. forces launched a total of 59 Tomahawk missiles at Shayrat Airbase in Syria in response to the attack, destroying approximately 20 percent of the Assad regime’s airpower in the process.

And Assad wasn’t let off for his recent use of chemical weapons in the Syrian city of Douma. In a coordinated effort with Britain and France, the United States launched strikes on three Syrian regime sites early Saturday. The Pentagon praised the attack for being “Precise, effective, and overwhelming.”

Additionally, the Trump administration offered no apologies or condolences after a deadly recent clash with Russian mercenaries.

In a major escalation, United States military forces, backed by AC-130s and Apache attack helicopters, obliterated more than 300 Kremlin guns-for-hire near the Syrian city of Dier al-Zor in the most lethal encounter between American and Russian forces since the Cold War.

President Trump hasn’t been afraid to target Putin’s Kremlin foot soldiers and political cronies as well. After it came to light that Russia had poisoned one of its ex-spies in Britain, President Trump worked in tandem with Britain and our European allies. The president kicked 60 Russian intelligence officers out of the U.S. and closed the Russian Consulate in Seattle. This was the largest purge of Russian spies in American history.

John Bolton, President Trump’s new national security adviser, solidifies the administration’s hardline stance on Russia. Moscow certainly needs no introduction to Bolton, who has been a hawkish critic of Putin and the Russian regime.

Bolton has advocated for the United States to retaliate against Russia through intensive “cyber-warfare,” and has signaled that America should go further in providing more aid to the Ukrainian government.

Throughout his presidency, President Trump has taken a more aggressive posture against Moscow than Obama. Don’t expect the administration to let up. Unlike President Obama, President Trump has learned that only bold and decisive actions, not meaningless red lines, will deter Russian aggression.

Alex Titus is a fellow at America First Policies, a nonprofit organization supporting policy initiatives that will put America first.