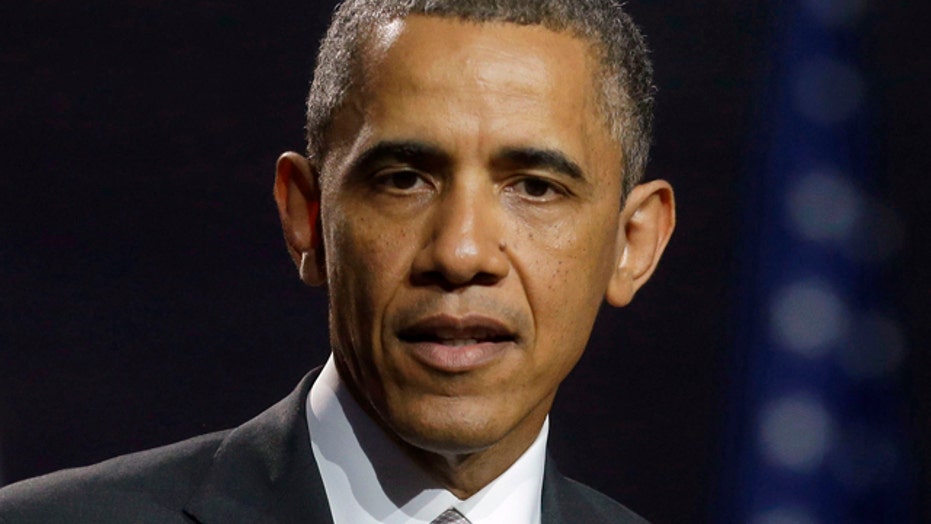 Inside the politics of Obama's climate change deal

President Obama will speak Tuesday, as world leaders assemble at the United Nations in New York for “Climate Summit 2014,” “to galvanize and catalyze climate action.” Environmentalists have taken note, organizing “the largest climate march in history,” to pressure governments to regulate “a world safe from the ravages of climate change.”

The message is clear: Pernicious global warming is upon us, and the government must act.

Bolstering this barrage of alarmism is last week’s finding from the federal government’s National Oceanographic and Atmospheric Administration (NOAA) that the global average surface temperature for August 2014 was the highest ever recorded for the month.

But the anomalous warmth in August still fell short of the all-time record for all months. That record was set nearly 200 months ago in February 1998. And that’s the real news. In this era of human-caused global warming, what is taking so long to set a new global temperature record?

During the 1980s and 1990s, new all-time record-high anomalies were occurring about every 3-4 years. But then, we hit the “hiatus.” The rise in the Earth’s average surface temperature basically stopped, “global warming” morphed into “climate change,” and it has been 16.5 years since the last all-time all-month record monthly temperature anomaly was set.

Just-published research from University of Guelph’s Ross McKitrick pegs the length of the hiatus, or “pause”—the period of no statistically significant rise in the earth’s average temperature—at about 19 years. Looking back even further, the U.N.’s Intergovernmental Panel on Climate Change (IPCC) shows that since the mid-20th century, observed global warming has been less than expected.

In short, all those computerized climate models that predicted large, accelerating, and generally uninterrupted warming were wrong. And it has the believers in those models scratching their heads.

Global warming is not proceeding as planned.  The climate appears less sensitive to our emissions of greenhouse gases than expected. The urgency to grant the government the authority to limit energy choice is not justified.

Nevertheless, the scaremongers doggedly claim the world is still on course for a climate catastrophe of our own making. They point to the record high temperatures in August as proof that global warming remains a viable beast that will eventually strike us. Natural variability, they say, has just been holding the savage back. And its grip is slipping.

Climate models, apologists say, can’t possibly be expected to get the precise timing of all natural hiccups correct. Therefore, we shouldn’t get distracted by poor model performance over the short term (a decade or two) but rather rest assured that what the models predict over the long-term will be correct.

For this argument to work, natural variability, and not inadequacies in the climate models themselves, must be shown to be completely responsible for the two-decade hiatus. Otherwise, the jig is up and it will be plainly obvious that climate models are unreliable. And in that case, the foundations for climate alarm, for a carbon tax, and for the president’s Climate Action Plan crumble.

About five or six years ago, climate modelers and their supporters found it easier to claim the hiatus didn’t exist than to try to explain it. As more and more time passed and earth’s surface temperature failed to rise, the hiatus grew too noticeable to be swept under the rug. A chorus was rising that the length of the hiatus exceeded that foretold by climate models.

To combat this growing din of model criticism, a fabulous storyline has been cobbled together from bits and pieces of the dozens of speculative explanations that have been forwarded as a cause for the pause. Climate catastrophists have gone from hiatus deniers to hiatus embracers, even going as far as to perversely claim that the hiatus actually strengthens the case for dangerous global warming.

At the very least, the lack of global temperature rise during the past two decades shows that climate models do not have a good handle on natural processes and the magnitude of their impact on the climate. More probably, it indicates that climate models predict too much warming from greenhouse gas emissions.  Most likely, it is both.

Paul C. "Chip" Knappenberger is the Assistant Director of the Center for the Study of Science at the Cato Institute.