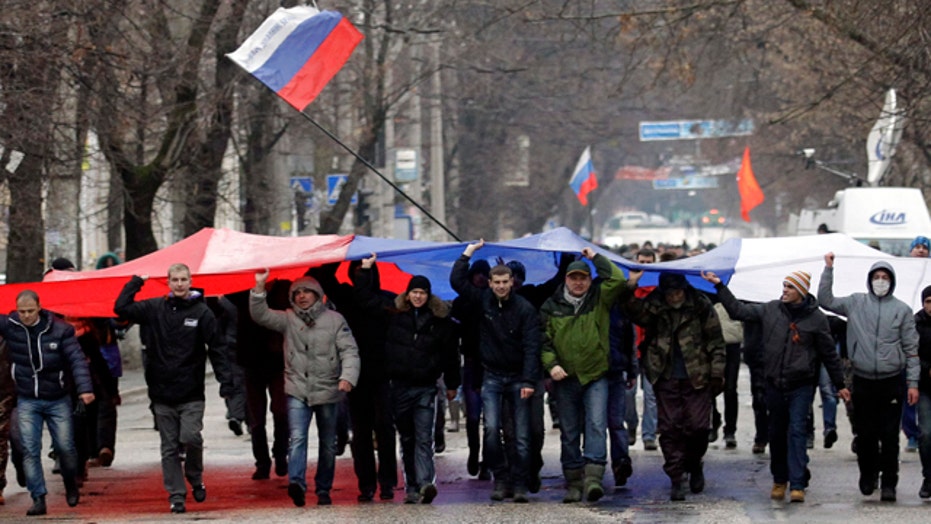 When Moscow tells us that their massive military maneuvers in Western Russia have nothing to do with what’s happening in Kiev it’s like the old Marx Brothers’ routine: Who are you going to believe, me (Moscow) or your own eyes?

In fact, while not a major military incursion by Moscow, the ongoing power plays in Crimea manifested in the presence of yet-unidentified, armed Russia-loyalists at two airports could be an ominous harbinger of things to come.

First, Moscow is signaling strength to Kiev, reminding their western neighbor that Mother Russia is a force to be reckoned with. You Ukrainians may be able to change your government—against Russian wishes—but you can’t change your geography.

Russia is also flexing its muscles at the Europeans and the United States. Moscow is cautioning the “West” that the “East” won’t brook any foolish attempts to bring Ukraine into a European or American sphere of influence.

Remember that the ongoing crisis was precipitated last November when Ukrainian president Viktor Yanukovich scuttled a trade pact with the European Union in exchange for a competing economic package from Russia, leading to months of street protests.

Russian President Vladimir Putin also wants to make it crystal clear that Russia considers any thought of trying to bring Ukraine into NATO a complete non-starter. Indeed, it’s a move Moscow might even go to war over.

Lastly, the military maneuvers are meant to buck-up the Russian people in light of what appears to be a short-term loss for Moscow after the success of the Winter Olympic Games in Sochi.

Putin wants Russians to know that this matter in Ukraine is still not decided.

While it’s unlikely that Russian troops and tanks will roll out of these ongoing field exercises over the border and into Ukraine, there’s good reason to watch the situation closely.

Russian military action against its neighbor isn’t out of the question—if the conditions are right.

We should bear in mind that Russia has been willing to protect ethnic Russians, Russian nationals and or former Soviet regions that were separated from the Motherland by the collapse of the Soviet Union and the end of the Cold War.

For instance, there were Russian military exercises near Georgia before their 2008 war over the disputed enclaves of Abkhazia and South Ossetia. Russian troops remain there to this day even after a peace agreement.

Moscow also still has a few thousand troops in the breakaway Transdniester region of Moldova supporting Russians and others who don’t wish to come under Chisinau’s rule.

The Kremlin might also act militarily if there is violence against Russians or Russian interests in Ukraine such as in the Eastern part of the country or Crimea which is heavily Russian.

There are some 10 million ethnic Russians/Russian nationals in Ukraine today—about 20 percent of the population of 45 million.

Russia might also take up arms if there is a move against the Russian Black Sea Fleet in Crimea at Sevastopol, a base Moscow leases from Kiev. There’s been a Russian naval base there since the late 1700s; the current lease ends in 2042.

The point here is that while a Russian military move against Ukraine is unlikely: never say “never.” Bringing Ukraine in for a soft landing between Europe and Russia is far from over--and won’t likely be easy.

Peter Brookes is Senior Fellow, National Security Affairs at the Heritage Foundation and a former deputy assistant secretary of defense for Asian and Pacific affairs. He is a Navy veteran. Follow him on Twitter@Brookes_Peter.