After two years and half a dozen Russia probes, what has the cost been to America?

We thought we’d seize this opportunity to take stock of all that we have learned, with Michael Flynn being the first major target of the Mueller investigation. That was all the way back, if you can believe it, at the beginning of 2017. It’s just been the nearly two years. The hunt for Russian spies on our soil not slowed down. It has metastasized into something vast and remarkable, practically its own agency of government.

There are now half a dozen separate Russia investigations being conducted by the Justice Department. That doesn’t even count the separate Congressional inquiries – four, five, maybe more - who knows? Then, of course, nearly 100 percent of the attention of every news organization in Washington.

So, what have we learned, after all that time and all that money, and all that attention? We know the Russians spent a total of – check the math - $4,700 on Google ads during the 2016 election. We know that Jerome Corsi and George Papadopoulos – two people that you likely had never heard of before -  may have done something bad, like misremembering dates or emails, though apparently neither one of them spied for anyone. That’s what we’ve learned.

We’ve also learned that–  people are not noting this, we thought that it was worth pointing out - virtually every issue that led voters to unexpectedly support Donald Trump in 2016 remains as of now, unresolved, and in some cases unaddressed: The decline of the American middle class. The drop in life expectancy. The opioid crisis. Our unsecured southern border. Crushing student loan debt. The global dominance of China. The quagmire in Afghanistan. Infrastructure. Healthcare costs. We could go on. You know, little things.

You haven’t heard much about any of that lately. The news anchors haven’t had time to tell you that because they’re too busy shouting self-righteously about Michael Flynn. He lied! He lied! They, by contrast, never lie. Because they’re good people, unlike Michael Flynn - who lied!

So, the point is, there’s been a cost to our Russia fixation, a massive one. Years later, we may look back and wonder what happened? How did everyone in America with an Ivy League education simultaneously go insane in a single year? Was there some kind of mass poisoning? Was it ergotism? It happened in medieval France – maybe that’s what happened. We’re going to let the historians sort it out. We don’t know for sure.

For now, all we know for certain is that the people in charge have lost it. They truly have. And if you don’t believe it, listen to them explain the intricacies of the Russia conspiracy. They’re mesmerized by it. It’s a tale so complex and so riddled with internal contradictions, it sounds like an eastern religion. Only they really understand it. But they mean it. And they understand it. To them, Russia is the touchstone. It’s the comprehensive theory of everything.

Consider what happened Monday night on cable news. It could have been any night, really, on cable news - CNN or MSNBC, take your pick. We just happened to be watching around 11 when this happened, so we’re bringing it to you. This is from the most serious news program that NBC offers on cable. It’s called "The 11th Hour."

There are two people in the following segment. The first is a man called Malcolm Nance. Nance identifies himself as a 35-year veteran of counter-intelligence work, whatever that means. His most recent book is “The Plot to Hack America.” It was a national best-seller, thanks to heavy promotion from MSNBC.

The second man on the screen is Brian Williams. Williams needs no introduction. He was anchor of the NBC Nightly News, back when that meant something. Williams is widely regarded as a good guy by people who know him. Absolutely in Washington he is regarded as one of the smartest people in the news business.

The point is, these aren’t kooks on late-night radio. They’re considered highly impressive people. Keep that in mind as you watch this. Williams opens the segment by explaining that Russian “disinformation teams” have been working to divide America, and convince the population, among other totally implausible things, that James Comey and Robert Mueller might have political agendas.

Ridiculous, right? Williams asks Malcolm Nance to comment on that.

“What Russia has done here and where the true brilliance of this intelligence operation comes from, is way back in the early 2000s," Nance says. "The Russia military conducted a strategic study and started carrying out a disinformation plan in which they said, instead of carrying out kinetic warfare against your enemies, the best thing we can do is create a disinformation frame around that nation to the point where over time, as we are constantly tearing them apart and feeding them false information, they would actually welcome an invasion.”

Huh? Wait a second here. This is what we in the news business call “news.”

For nearly 20 years, the Russians have been building a “disinformation frame” around the United States? What’s a “disinformation frame”? And how does it manage to brainwash an entire population so thoroughly that it welcomes a foreign invasion? That’s got to be the most powerful mind-control device in human history. More detail please.

This is the part of the interview where the anchor should politely interrupt the guest and asks him to explain what the hell he’s talking about. But Williams doesn’t do that. He just lets Nance keep talking. So Nance does keep talking.

“So Russia has done that to the United States and that started way before 2016," he says. "The earliest references I have with relation to Donald Trump shows that it started back 2011 with [accused Russian spy] Maria Butina and the NRA contacts with the fundamentalist Christian right and the alt-right in the United States."

"Russia was pushing these disinformation themes then," Nance continues. "Then in 2013, they stood up the Russian Federation Internet Research Agency, which built all of these memes and tropes which became the cruise missiles of fake news and disinformation designed to do what it did today and take one third of the United States population and make them refuse to believe what they see before their very eyes and may have elected a president in the process.”

Holy smokes. This is a tsunami of news. It turns out that Donald Trump’s collusion with Russia began years before any of us suspected, way back in 2011.

Here’s the confusing part. In 2011, by all outward appearances, Trump was a pretty conventional New York liberal. He went on David Letterman to read Top Ten lists. He endorsed gun control. But it was all a cover, a sophisticated ruse.

As Malcolm Nance reveals, Trump was in fact busy plotting with the NRA, Christian fundamentalists and the alt-right. Keep in mind, this was years before there was such a thing as the alt right. But that’s just how stealthy this operation was. Even the Steele dossier missed it. So did the rest of us, though that’s not surprising since, as Nance has explained, thanks to Russian brainwashing, “one third of the U.S. population” can no longer perceive reality. That’s Malcolm Nance’s position.

What would you do if someone repeated those exact words to you on a city bus? You’d likely be worried. At the very least, you’d probably switch seats. Not Brian Williams. He moved closer. Williams didn’t seem to consider Nance’s explanation strange in the slightest. He was deeply impressed by it.

Williams asked how the Russians could have pulled off an operation this extensive without the willing help of American accomplices. Of course, Nance had an answer. Keep in mind as you watch this, that we have not edited the tape in any way. This aired verbatim Monday night on MSNBC.

"They have played on the themes of the far-right conspiracy theories of the 1960s, the John Birch Society, a sideline group. The farthest extremes of the libertarian parties," Nance says. "They have amplified racism to the point where the alt-right, Steve Bannon’s own creation of gamers, is now the wholly-owned subsidiary of the Trump campaign and are believers in David Duke, the Ku Klux Klan, Richard Spencer the neo Nazi and Robert Spencer the Islamophobe to the point where they’re mainstreamed."

"This is how effective this information warfare campaign has been carried out," Nance continues. "And let me tell you, this report shows how they went after to suppress the African American vote. And there’s no doubt in my mind, or anyone else’s in the intelligence community, that doesn’t believe that it took American citizens to assist them in really getting down to where these voters were who needed to be suppressed.”

No news organization should traffic in garbage like this. News anchors exist to push back against nutty claims like these. But Brian Williams bought them completely.

So in case you weren’t transcribing that as you watched, we’ll bottom-line it for you. The Russia conspiracy just expanded to include a bewildering array of new figures: The John Birch Society. The KKK. David Duke. People who play online video games. Steve Bannon. A religion blogger named Robert Spencer, and others. Collectively, their goal was not simply to elect Donald Trump, but to hurt African-Americans. Why would Russian intelligence want to do that? If you have to ask, you’re probably working for Vladimir Putin, too. So, shut up.

It goes without saying that this is all completely insane. There’s no evidence to support any of it. It is not true. Worse than that, it’s irresponsible.

Keep in mind, this aired on a division of NBC News. So, some large number of people will believe it. They’ll go to sleep worrying about the invisible “disinformation frame” surrounding the country, and the resurgence of the John Birch Society. They’ll wake up a little more convinced that anyone who disagrees with them is a tool of a foreign power. Because that is the real message here and of this whole conspiracy: There is no other side of the debate. There’s only Russian propaganda. 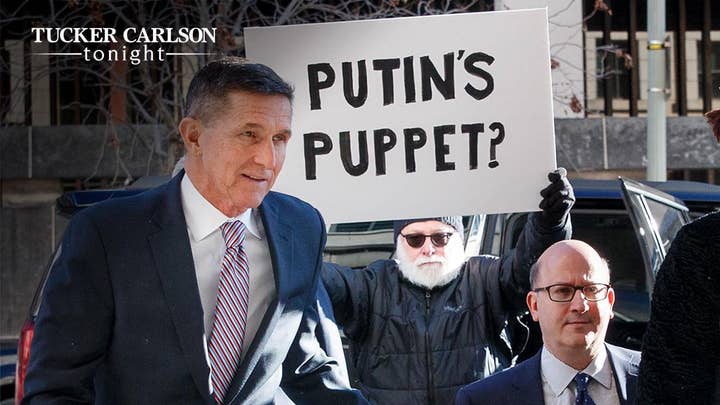 To a certain sort of fragile liberal, that is probably comforting to know. But it’s a lie. It’s its own form of propaganda. No news organization should traffic in garbage like this. News anchors exist to push back against nutty claims like these. But Brian Williams bought them completely.

“Wow, Malcolm Nance. This is why we ask you all the time to come on this broadcast," Williams says. "Scary stuff, but it needs to be said, needs to be heard. Thank you, sir, so much for joining us once again."

"It needs to be said." It needs to be heard." "This is why we ask you to come on this broadcast." Save that video. Future generations won’t believe it.