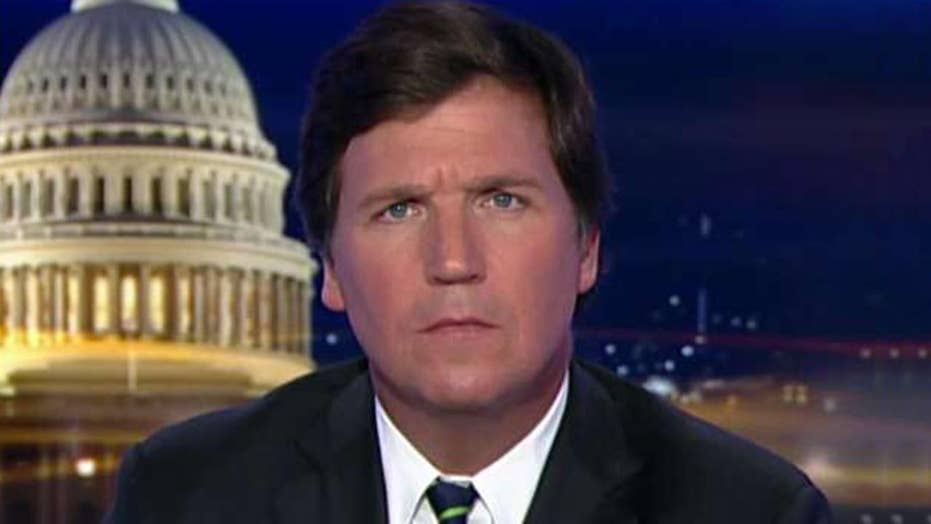 Tucker: The activist left is what we fear

For days, we have watched as a growing caravan of Honduran nationals has snaked northward toward our border to claim asylum here. The spectacle has been televised from the very start and it has sparked an explosive political debate.

Now, more migrants are on the way. There are reports tonight that another caravan of asylum seekers, this one organized exclusively on social media, is planning to leave from El Salvador next week heading here.

You can be certain then when and if that group actually arrives here, the usual red-faced cable news anchors will demand that we let them in immediately, no questions asked. -- Never mind that one-third of all Salvadorans on Earth already live here in the United States. -- It is our duty, they will tell us.

Once those anchors get off the air they will return home to entirely immigrant-free neighborhoods feeling good about themselves. The only Salvadorans they will ever meet personally are those doing their laundry for minimum wage.

But ignore the hypocrisy, if you can. Stifle your personal concerns about mass immigration. People are suffering, they're telling us. And only America can save them.

If you've been watching television you've seen pictures like this all day of desperate poverty and hopelessness.

Oh, sorry about that. That was the wrong tape. That was not a slum outside Tegucigalpa. That video was shot right here in Orange County, California, not far from Disneyland. The desperate and impoverished people on the screen you saw were American citizens.

Hundreds of thousands of them sleep on the ground every night in this country. They don't make it on CNN very often. They're just Americans. Their tragedy is not interesting. If they did laundry at 5 bucks an hour for rich people though, our moral superiors might notice and care.

But as of now, no. The cable news geniuses could not be less concerned about what is happening to American citizens, which, if you think about it, kind of explains the Trump phenomenon.

One of the great mysteries here in Washington is how a president with no prior political experience, who's emotionally volatile and not very articulate, remains nevertheless so very popular outside of Washington. It doesn't make any sense.

But of course, it does makes sense. What’s Trump's secret? He says things like this:

A nationalist, in other words, a leader who puts his own country first, who cares about his own people most. You'd think everyone in charge of a nation would be a nationalist.

Putting interests of your own citizens above those of citizens of other countries was once considered a prerequisite for running a democracy, not anymore. Now it's considered immoral, evil, in fact. Here’s just some of what’s being said on other cable news networks by anchors and commentators:

DON LEMON, CNN TONIGHT HOST, CNN: Nationalist. Use that word. We're going to talk about that word tonight. It is a favorite of the Alt-Right and is loaded with nativists and racial undertones.

BENJAMIN LOUIS CARDIN, SENIOR UNITED STATES SENATOR, MARYLAND: It is. It is. It applies, it does provoke hate activities.

BILL BURTON, AMERICAN POLITICAL CONSULTANT, FORMER DEPUTY PRESS SECRETARY FOR PRESIDENT OBAMA: What are you trying to say as president of the United States that you're a nationalist? Americans know what that means. It's not even a dog whistle anymore. It's a bullhorn.

Hitler was a nationalist. Of course, so were Mahatma Gandhi and Abraham Lincoln, and every other leader of every other nation-state throughout history until about 20 minutes ago.

Immigration, it turns out, according to many on the left, is not a civic question that American voters might be allowed to have opinions about. It's bigger than that. It's a moral outrage. It's a humanitarian crisis.

The law is irrelevant here, so are any of your stupid, selfish concerns about the effect of impoverished foreigners moving into your neighborhood or your school district.

The rule here is simple. Listen carefully. If people from a place poorer than America want to move to America, they get to do that. Period.

If you disagree or complain or do anything other than recite the poem at the bottom of the Statue of Liberty, you are, well you already know what you are, because you've heard it a thousand times, but we're going to tell you again anyway, maybe this time it will penetrate, you are a racist.

Yes. You're racist just like you were racist for opposing ObamaCare or not watching Sunday Night Football or believing that Brett Kavanaugh did not sexually assault someone. You are a bigot until the moment you obey the Democratic Party, at which point you are a good person like Al Sharpton or Louis Farrakhan. You know the drill.

There's one interesting new twist in this latest propaganda barrage though, fear.

If you're against admitting an entire caravan full of poor people into this country it's because you've been coached by that dastardly Fox News to fear the people in the caravan.

But let's be honest. That's not really true. There are a lot of reasons to oppose admitting this caravan full of people. We don't need any more low-wage labor in this country, for one thing. We also have a right to decide who occupies our property, that's always true.

Show up uninvited at Joy Reid's house and you'll discover that she agrees with that principle, too. So there are good reasons to oppose this. Fear of Hondurans isn't really one of them.

By and large, these are not scary people. Mostly, they're just poor people from crappy countries who want a better life. That's understandable. Nobody blames them for that. Nobody's really afraid of these people.

Listen, cable news geniuses, it's not impoverished peasants from Central America we're afraid of. It's you.