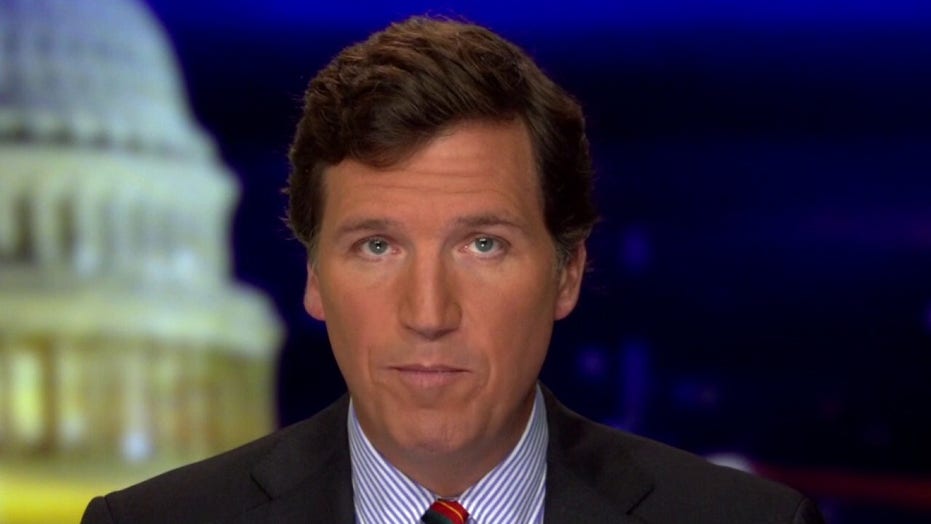 Editor's Note: This article is adapted from Tucker Carlson's opening commentary on the Oct. 16, 2020 edition of "Tucker Carlson Tonight."

If you flipped the channel during our show Thursday night, you may have seen the president and his challenger making their respective cases to voters. But President Trump and Joe Biden weren't debating each other. That would have been too risky. There's a massive public health crisis underway, you may have heard.

So to avoid what doomsday hobbyists on Twitter like to call a "superspreader event," Trump and Biden held separate indoor town halls surrounded by people. They talked to partisan moderators instead of each other. That might seem like a loss to the country three weeks before a presidential election. But unfortunately, the science on this question is clear: Nothing could be more dangerous to America than a televised in-person debate between Joe Biden and Donald Trump.

So the so-called debate commission made certain a debate couldn't happen. Who benefitted from that decision? Well, not voters. America has held regularly scheduled presidential debates for decades and we have them for a reason. The more information voters can get directly from the candidates rather than the media, the better our democracy functions, not that anyone's interested in democracy anymore.

Joe Biden doesn't care either way. He just didn't want to talk about Burisma. That's the scandal that vividly illustrates how, as vice president, Biden subverted this country's foreign policy in order to enrich his own family. The good news for Biden Thursday night was that he didn't have to talk about it. No one from ABC News asked him about that scandal for the entire 90 minutes.

As we've been telling you this week, the New York Post and a few other news outlets, including "Tucker Carlson Tonight," have published e-mails taken from Hunter Biden's personal laptop. They show that Hunter Biden was paid by foreign actors to change American foreign policy using access to his father, then the vice president. This is a big story. It is also a real story.

Friday afternoon, we received nonpublic information that proves conclusively this was indeed Hunter Biden's laptop. There are materials on the hard drive of that computer that no one but Hunter Biden could have known about or have replicated. This is not a Russian hoax. Again, we're saying this definitively. We're not speculating. The laptop in question is real. It belonged to Hunter Biden. So there is no excuse for not asking about it.

But they didn't ask about it. It was a cover-up in real time. No matter what happens in the election next month, the American media will never be the same after this. It cannot continue this way. It is too dishonest.

Nevertheless, we did learn a few things Thursday night. (It's hard not to learn when you watch Joe Biden try to speak for 90 minutes.) At one point, an activist told Joe Biden that she has an eight-year-old transgender daughter. She asked Joe Biden what he thought about that. Here's how he responded:

BIDEN: The idea that an eight-year-old child or a 10-year-old child decides, 'You know, I've decided I want to be transgender. That's what I think. I'd like to be a -- make my life a lot easier.' There should be zero discrimination. What's happening is too many transgender women of color are being murdered. They're being murdered. I mean, I think it's up to now 17, don't hold me to that number.

So if an eight-year-old biological boy decides one day that he's really a girl, that's final and you'd have to be a bigot to pause and say, "Wait a minute, you're eight years old, you're a small child. Maybe let's think about this for a minute." That's what a normal person who has kids would say. People with kids know that children grow and change. They change their minds about a lot of things, including themselves. That's the reality of it.

But if you're a crazed ideologue, you don't care about reality. So you would tell the rest of us that an eight-year-old is entitled to hormone therapy on demand and permanent, life-altering surgery. That's what Biden is telling us.

It doesn't matter how fashionable talk like this is right now, and it is very fashionable, it is crazy and it's destructive and it's having a profound effect. No one wants to say it, but it's true. We know that between 2016 and 2017, the number of gender surgeries for biological females in this country quadrupled. We also know that many people who get those surgeries regret them later, deeply regret them. We'd have a lot more data on that, but universities are actively punishing researchers who follow that line of inquiry. So much for science.

In the end, mania like this will end. The left is at war with nature. Inevitably, they will lose that war, because nature always prevails. But in the meantime, many children are being hurt irreparably. Biden doesn't care. It's the new thing, and so he's for it. In fact, Biden is now busy rewriting his entire life story to pretend that he has been woke for 60 years. Thursday night, he told us he became a gay rights supporter during the Kennedy administration, sometime around 1962, when he and his father saw two gay men kissing.

When asked about police brutality, the former vice president speculated that maybe people like George Floyd would be alive today if the police had just shot him in the leg a few times.

BIDEN: There's a lot of things we've learned and it takes time. But we can do this. You can ban chokeholds ... But beyond that, you have to teach people how to deescalate circumstances, deescalate. So instead of anybody coming at you and the first thing you do shoot to kill, shoot him in the leg.

How much would you have to know about firearms or human biology to wonder if maybe there could be some unintended consequences there? People do have arteries in their legs, after all, and sometimes bullets do miss their targets. So why did no one point out how demented Biden's answer was?

Well, we have some clarity on the question of why no one pointed it out. It turns out George Stephanopoulos, the moderator of last night's ABC town hall, was not the only political operative in the room. One supposedly uncommitted voter was, in fact, a former Obama administration speechwriter called Nathan Osburn. Osburn repeated Biden campaign talking points to the letter, at one point referring to court-packing as a safeguard "that'll help ensure more long-term balance and stability" on the Supreme Court.

BIDEN: I have not been a fan of court-packing because I think it just generates, what will happen ... Whoever wins, it just keeps moving in a way that is inconsistent with what is going to be manageable.

STEPHANOPOULOS: So you're still not a fan?

BIDEN: Well, I'm not a fan ... It depends on how this turns out, not how he wins, but how it's handled, how it's handled. But there's a number of things that are going to be coming up and there's going to be a lot of discussion about other alternatives as well.

So we did learn something new last night: Joe Biden isn't a fan of court-packing. Court-packing has had a few off years, and Joe Biden started to lose his faith in it, even sold his "Court-Packing" jersey. But at the end of the day, Joe Biden is still open to court-packing and can get back on the court-packing bandwagon depending on how things are "handled." Got it?

Biden was allowed to answer non-questions like this because he was surrounded by sycophants and former employees of his party. Over at NBC, by contrast, the sitting president didn't have that luxury, to put it mildly. (By the way, it's not good for you to be sucked up to too much. It's good to get smacked around a little bit. It makes you sharper.)

During the president's one-hour event, moderator Savannah Guthrie asked him dozens more questions than the voters in the room got to ask. And when Trump began speaking, Guthrie interrupted him over and over again. Joe Biden wasn't there, so the moderator played stand-in for Joe Biden.

The good news about all of this is it's so bad and so transparent that it can't continue. All their stupid little morning shows and their dumb Sunday shows and their even dumber cable shows -- all of that's going away when the smoke clears from this election. There will be a massive realignment in the media no matter who wins, because they've showed who they are and it's so unappealing, so far from journalism, that it can't continue.

Meanwhile, back on ABC, Joe Biden skated on answering any questions of substance about his son or Antifa or BLM. On NBC, Guthrie pushed Donald Trump to condemn QAnon and White supremacy, and he did it dutifully. But it wasn't enough. The point of demanding performative disavowals isn't to get the disavowal, it's to smear the person you're asking to disavow the group by association with the group.

TRUMP: You always do this. You've done this line -- I denounce White supremacy, OK?

GUTHRIE: You did two days later.

TRUMP: I've denounced White supremacy for years. But you always do, you always start off with the question. You didn't ask Joe Biden whether or not he denounces Antifa ...  Are you listening? I denounce White supremacy. What's your next question?