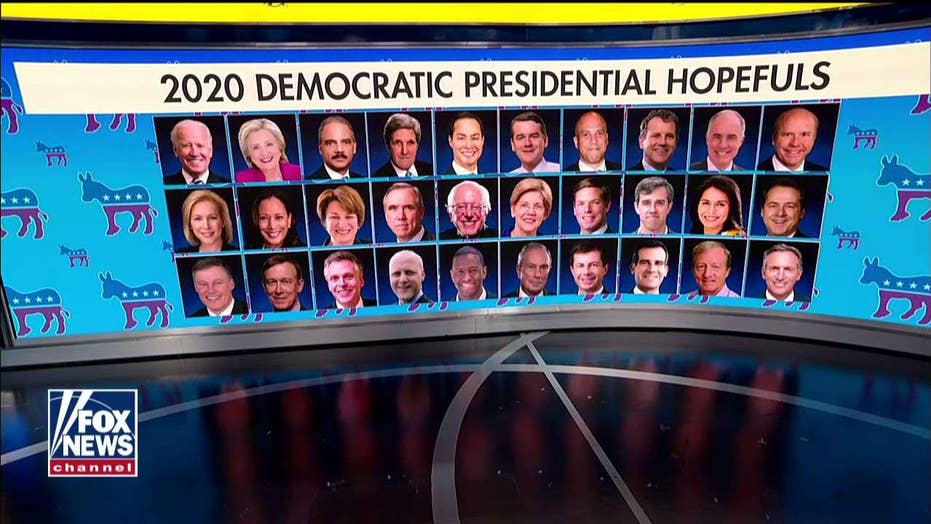 Huckabee on 2020 Hopefuls: Democratic Candidates Are Trying to 'Out-Left' Each Other

House Speaker Nancy Pelosi is taking a victory lap, enjoying her “win” in denying President Trump funding for a border wall, and in particular celebrating the “unity” of her caucus. She should; it was remarkable that so many freshmen Democrats, elected on promises of reaching across the aisle in districts that Trump won in 2016, stuck with the House Speaker as she refused any and all negotiations aimed at re-opening the government.

Pelosi should also trumpet that unity because….it isn’t going to last. A raucous primary season combined with a need to appease noisy progressives will lead Democrats to embrace positions that are unpopular with the majority of American voters. Some members will defect out of self-interest.

Democrats are tumbling over each other to get in the 2020 presidential race. Most of them, struggling for attention from likely primary voters, are tacking ever-harder to the left. As they denounce ICE, propose wealth taxes, sign onto Medicare-for-all and free tuition, endorse unlimited abortion, advocate the elimination of carbon fuels and suggest that people backing a border wall are “racists,” they may well please the progressive wing of the Democratic Party.

But, they are not going to please the majority of Americans. Former House Speaker Harry Reid, of all people, recently admonished freshman Rep. Alexandria Ocasio-Cortes, D-N.Y. (AOC), for proposing “radical” changes to our tax system, noting that Americans are “very conservative.”

Reid is correct. For all the excitement about AOC and Bernie Sanders’ embrace of socialism, and the giddiness over extreme tax proposals from the likes of Elizabeth Warren and Kamala Harris, the country is not there yet.  It was not progressives who took control of the House last fall, it was moderate Democrats.

The response to proposals attempting to combat climate change is illustrative. Some polls show that nearly 70 percent of the country believes that climate change is a problem; but a recent AP survey also indicated that Americans aren’t willing to spend much to address it. When the poll asked if respondents would cough up $1 per month to tackle climate change, 57 percent signed on, but when the cost jumped to $10 per month only 28 percent agreed. Call me crazy, but that doesn’t sound like a burning commitment.

For all the excitement about AOC and Bernie Sanders’ embrace of socialism, and the giddiness over extreme tax proposals from the likes of Elizabeth Warren and Kamala Harris, the country is not there yet.  It was not progressives who took control of the House last fall, it was moderate Democrats.

On immigration, attitudes are fluid, but Democrats should not imagine that paying lip service to tightening “border security” will play well as another huge caravan of migrants from Central America approaches our southern border. Americans may have been persuaded by Pelosi and her pals in the liberal media that a wall is “immoral,” but most people don’t want to see our border wide open to sex traffickers and drug dealers.

The current system is failing, and many Americans agree with President Trump’s proposals to improve it. A year ago, a Harvard-Harris poll showed 84 percent of the country favored a merit-based immigration system over the diversity lottery we now have, and 62 percent thought the security at the border is inadequate. In fact, 57 percent of voters favored “building a combination of physical and electronic barriers across the U.S.-Mexico border,” including 53 percent of Hispanics and 54 percent of Independents.

Democrats claim recent polling tells a different story, but while a new Harris survey showed 55 percent oppose Trump’s wall, voters are pretty evenly split on the appeal of a “security barrier” on the border. Moreover, 85 percent said that the security of the southern border is a problem.

Most Americans favor immigration, but only if it is legal. Democrats in blue states don’t see it that way. New York State legislators recently voted to give college tuition aid to people in the country illegally. That’s a generous gift, at taxpayers’ expense, as is the medical care that New York now grants undocumented people.

Democrats are not staking out extreme positions on just immigration and climate change, they also are pushing the envelope on abortion. In New York State, a new law allows late-term abortions if the “health” of the woman is in jeopardy, a standard opponents describe as purposefully vague. The state’s Catholic bishops wrote in a statement that the law, signed by Governor Cuomo, who may be running for president, removes “all state restrictions on late-term procedures.”  This, at a time when infant survival rates continue to increase for ever-more premature births.

Some newly elected Democrats, like Ilhan Omar from Minnesota, are being described as anti-Semitic; others, like Mazie Hirono and Kamala Harris, have been tagged for anti-Catholic remarks.

The Iowa caucuses, round one of the primaries, fall next year on February 3. As the campaign gets underway in earnest, that “unity” that so delighted Nancy Pelosi will be tested. Already, progressives are criticizing Kamala Harris for her previous indifference to criminal justice reform, Bernie Sanders has been blasted for insensitive comments about women’s’ pay, Elizabeth Warren has been criticized by Native Americans, Kirsten Gillibrand is considered disloyal for having turned on the Clintons, Beto O’Rourke has been ridiculed for sharing his dentist visit, Cory Booker for his “Spartacus” moment, and so on. Joe Biden? Too old, too male and too white.

Recent polls suggest that any number of Democrats could beat President Trump in a head-to-head match-up. Two things to remember: one, a candidate’s polls always sink once they become the nominee; second, Trump’s disapproval a couple of days before the 2016 election showed him with the highest unfavorables (61 percent) ever recorded for a presidential candidate. Hillary Clinton’s negatives were better, at 52 percent, but still a record.

And yet, he won. If Democrats continue to veer left, he will win again.