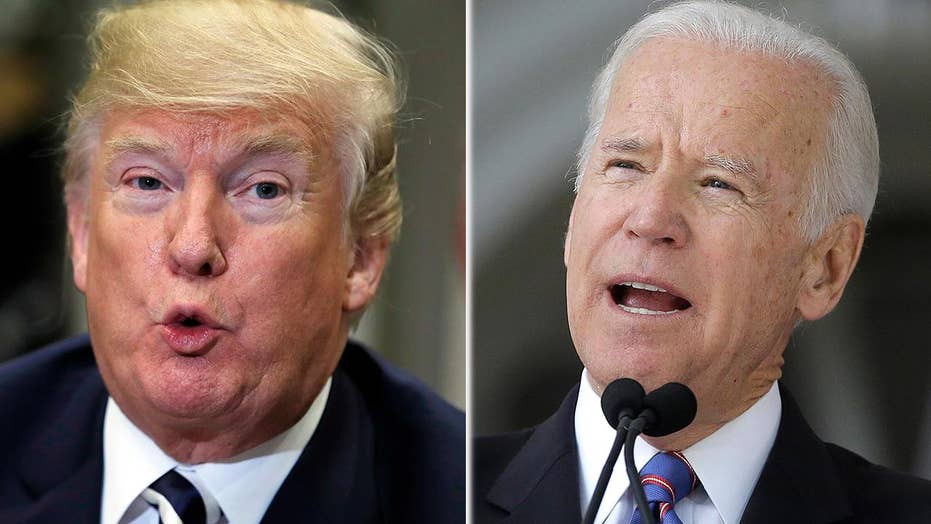 Fighting words from Trump and Biden

Not since Ali took on Frazier has a heavyweight fistfight grabbed so many headlines. Serious people have written serious articles about a possible smack-down between septuagenarians President Donald Trump and former Vice President Joe Biden, assessing their respective fitness and physiques (both over six feet, both weighing in at more than 200 pounds). Honestly, could there be a dopier distraction?

This all comes from a verbal tit-for-tat, started, it must be said, by “Crazy” Joe Biden, who said at a recent rally what he would like to do to Trump after hearing the president’s claim that he could grab women by the you-know-what: “If we were in high school, I’d take him behind the gym and beat the hell out of him.” That bluster was trumped by Trump tweeting that Biden “doesn’t know me, but he would go down fast and hard, crying all the way. Don’t threaten people Joe!”

There you have it: the backdrop for the (verbal) Fight of the Century, perhaps paving the way for a 2020 contest between the two.

Amazingly, it has a lot in common with the real Fight of the Century, which took place in 1971, when Muhammed Ali (nee Cassius Clay) took on Joe Frazier for the World Championship. Like Joe Biden and Donald Trump, neither of whom has lost an election, both boxers were undefeated. Ali entered the ring with a 31-0 record, with 25 KOs, while Frasier had notched up 26 victories and 23 Kos. It was the first time that two undefeated boxers had sparred for the World Heavyweight title.

Just like today’s, that fight had political overtones, pitting Left against Right. Ali had beaten Sonny Liston to become World Champion in 1964 and had successfully defended his title on several occasions. But, he had been stripped of his belt after refusing induction into the army in 1967. The decision by boxing authorities to exile the fighter, who explained that, “Man, I ain’t got no quarrel with them Vietcong,” caused an uproar. Anti-war types cried foul over the decision, saying the sidelining of Ali was politically motivated and unfair. Those on the right took up Frazier as a champion of our war against Communism, and branded Ali a traitor.

Like today, the country was divided, and the Ali-loving media hyped the contest. The bout became a global sensation, with the closed-circuit TV broadcast attracting an estimated 300 million viewers in 50 countries, a record at the time. A sell-out crowd at Madison Square Garden paid as much as $900 in today’s prices for a ring-side seat. Even so, not everyone won a ticket; Frank Sinatra famously moonlighted as a Life magazine photographer to get into the Garden. Burt Lancaster, for the first and last time, was the color commentator. Never before had a prize fight gained such an audience.

Like today, trash-talking stirred passions, though unlike today, only one contestant had a big mouth, and that was Ali. In the lead-up to his first championship bout, Ali said about Liston, “Ain't he ugly? He's too ugly to be the world's champ.” He also demeaned Frazier, calling him a “gorilla”, as well as an “Uncle Tom”.  Ali’s quasi rap style of poetry was novel, incendiary, and added to the champ’s widespread appeal.

But after all the bluster and the hype, Ali lost the Fight of the Century. The bout went a full, grueling, 15 rounds. Ali started strong, but then Frazier landed some devastating blows in the third round, and the momentum turned. Frazier was unanimously declared the winner, to keep his title. After the fight, Ali refused to concede defeat, calling it a “white man’s decision.”  Sort of like those Democrats who continue to challenge Trump’s win.

Joe Biden has walked back his verbal threat against Trump, but appears eager to challenge him in 2020. Many think he’s the Democrats’ best chance to win back the party’s traditional blue collar voters who abandoned Hillary Clinton. He would battle a number of progressive candidates like Elizabeth Warren and Bernie Sanders for the nomination, but recent polls show him out in front by a comfortable margin. They also show him way ahead of President Trump; a January CNN poll showed him topping the president 57 to 40. Like Ali, likeable Biden has the media in his corner, in part because of the sometimes outrageous things he says.

More important, with his aggressive moves to confront China on their trade cheating and theft of intellectual property, Trump is burnishing his credentials with working-class Americans who want their government to stick up for them. He has also cut their taxes and pumped up the economy; those are stiff tailwinds. In addition, Trump has surprised many by taking up liberal positions, like endorsing legal status for those covered by DACA or banning bump stocks; those unexpected stances undercut important Democrat talking points.

Frazier won the Fight of the Century by catching Ali unawares with his left hook. Biden should beware: Trump has one too.