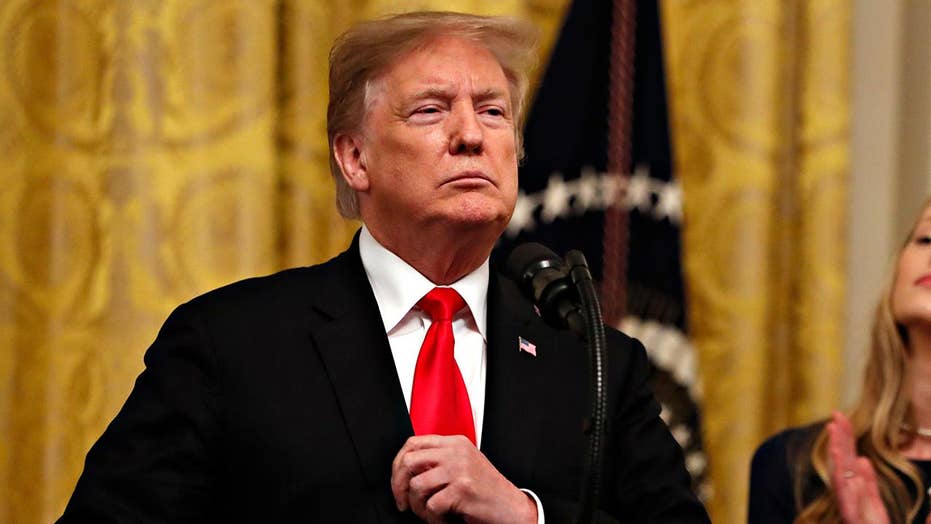 Trump doubles down on his support for Israel; correspondent Gillian Turner reports from State Department.

Affirming the strong ties between the U.S. and Israel, Israeli Prime Minister Benjamin Netanyahu will meet next week with President Trump at the White House and will speak an estimated 18,000 people at the American Israel Public Affairs Committee’s annual policy conference in Washington.

The prime minister’s visit comes on the heels of President Trump’s announcement Thursday in a tweet that “After 52 years it is time for the United States to recognize Israel’s Sovereignty over the Golan Heights,” which were captured from Syria in the Six-Day War in 1967.

Trump’s announcement is welcome news for Israelis and further evidence of his strong support of the Jewish state.

Israeli voters go to the polls April 9 for parliamentary elections. Netanyahu has long sought U.S. recognition of Israel’s’ control of the Golan Heights. President Trump’s announcement and the Israeli leader’s meeting with him are both expected to boost Netanyahu’s chances of staying in power in the elections.

The AIPAC policy conference has been dubbed the largest pro-Israel gathering in the United States. U.S. government officials from both parties – including Vice President Mike Pence, Senate Majority Leader Mitch McConnell, R-Ky., and Senate Minority Leader Chuck Schumer, D-N.Y. – are among the speakers, showing the closeness between the U.S. and Israel.

Most Americans recognize that a large majority of people in the U.S. support the Jewish state. And because Jews make up only about 2 percent of the U.S. population, the vast majority of Israel’s supporters in the U.S. are non-Jews.

But AIPAC and its grassroots activists are just one small piece of a far larger pro-Israel community in the U.S. that works to support the Jewish state. Altogether, millions of Americans are eager to stand with Israel because of its commitment to democracy, human rights and freedom.

This is why I’m proud to call myself a member of the so-called “Israel lobby.”

Critics of Israel have attempted to use the term “Israel lobby” as a slur. The popular and notoriously anti-Semitic book written by Stephen Walt and John Mearsheimer titled “The Israel Lobby”  argues that Jews and evangelical Christians who support Israel have some sort of puppet-master control over U.S. foreign policy and skew it to be pro-Israel in a secret and sinister way.

While Walt and Mearsheimer have served as the intellectual foundation of this anti-Semitic movement, prominent politicians like freshmen U.S. Reps. Ilhan Omar, D-Minn., and Rashida Tlaib, D-Mich., serve as its foot soldiers.

Omar, a rising star in the Democratic Party, argued on Twitter that American politicians who support Israel do so only because they collect large campaign contributions from Jews.

Omar doubled down on this anti-Semitic charge by saying that supporters of Israel may have “dual loyalty” to a foreign nation – Israel. This is a painful charge long made against Jews, implying they can’t be trusted to be patriotic citizens of the nations where they live because they have a secret loyalty to the Jewish community and (since 1948) to Israel.

Fortunately, Omar, Tlaib and other misguided critics of Israel don’t represent the mainstream viewpoint in America.

Most Americans recognize that a large majority of people in the U.S. support the Jewish state. And because Jews make up only about 2 percent of the U.S. population, the vast majority of Israel’s supporters in the U.S. are non-Jews.

Don’t just take my word for it. Polls have repeatedly shown that nearly 3 out of 4 Americans have a positive view of Israel. That includes folks across the spectrum -- from liberals to conservative evangelical Christians.

But really, is anyone surprised by this?

America and Israel are like two peas in a pod. The two countries were both established by dreamers who fought against the odds to create nations built on the principles of human dignity and freedom. Mutual respect for human rights and liberal values will always keep the U.S.-Israel relationship close and strong.

In addition to our shared values, the Jewish state continually promotes America’s security interests in the Middle East. Israel serves as the main check on Iran and works to combat the regime’s radical Islamist proxies across the region. The Israeli military has conducted hundreds of strikes against Iranian installations and forces in Syria alone.

Americans also greatly benefit from products and services that we use daily that come from Israel. As an example, reading this article from a smartphone would be nearly impossible if it wasn’t for Israeli technology within your device. Driving would be harder without the use of the popular navigation app Waze, created by an Israeli startup that was acquired by Google in 2013 for over $1 billion.

That Via ride share you recently took to see friends or family was operated by an Israeli company. And who doesn’t love a big spoonful of Sabra hummus – made by another Israel-based firm. Not to mention that American technology giants like Intel, Apple and Facebook all have significant research and development investments in the Jewish state.

To be sure, this list is just the tip of the iceberg of the special relationship shared between our two nations.

With this in mind, let us end the ridiculous notion that American support for the Jewish state is built on some secret cabal of rich Jews handing out money and operating in the shadows. This discredited and absurd conspiracy theory is blatantly anti-Semitic and completely ignores basic facts, statistics and countless polls that show otherwise.

Alex Titus is a Public Interest Fellow in Washington, D.C.